Desperate … or Genius?!: Arnold Schwarzenegger Signs Up for Conan Sequel 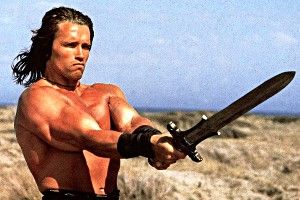 So you followed up your exit from the Governors Mansion by revealing a secret love child, signing up for a bunch of movies no one seems particularly psyched about, then dropping a memoir no one really buys — what do you do next? Why, a desperate-seeming but possibly epic sequel of your very first hit, of course! Going all the way back to the original blueprints, Arnold Schwarzenegger has signed up for The Legend of Conan, a sequel that will find the warrior in the winter of his life.

OK, so, yes, they just rebooted Conan in 2011, with Khal Drogo in the lead role. But, according its quite passionate producer Chris Morgan, this is going to be Conan done right:

The original ended with Arnold on the throne as a seasoned warrior, and this is the take of the film we will make … It’s that Nordic Viking mythic guy who has played the role of king, warrior, soldier, and mercenary, and who has bedded more women than anyone, nearing the last cycle of his life. He knows he’ll be going to Valhalla, and wants to go out with a good battle.

To be clear: This movie skips over not only the most recent Conan, but also Arnold’s own 1984 sequel, Conan the Destroyer. Morgan again:

Robert E. Howard’s mythology and some great philosophy from Nietzsche to Atilla the Hun was layered in the original film. People say, he didn’t speak for the first 20 minutes of the film, but that was calculated in depicting this man who takes control of life with his own hand. This movie picks up Conan where Arnold is now in his life, and we will be able to use the fact that he has aged in this story. I love the property of Conan so much that I wouldn’t touch it unless we came up with something worthy. We think this is a worthy successor to the original film. Think of this as Conan’s Unforgiven.

Are you convinced yet? For sure, things haven’t exactly been breaking Arnold Schwarzenegger’s way recently. And yeah, he’s probably been laughing off offers for another Conan movie every day for the last 25 years. So, indeed, this looks pretty bottom-of-the-barrel-y: In desperate hopes of continued relevance, the wizened action star agrees to strap on the fur underwear once again. But, I don’t know, Chris Morgan seems pretty sure it’ll rule. He actually had the chutzpah to compare it to Unforgiven?

One last question: Considering the rise of a certain gangly talk show legend between the drop of the original fantasy epic and this new one, what are the chances of a Conan O’Brien cameo?