Day of the Pumpkin: A Daredevil Attempt to Eat Every Pumpkin-Flavored Item From the Local Trader Joe’s 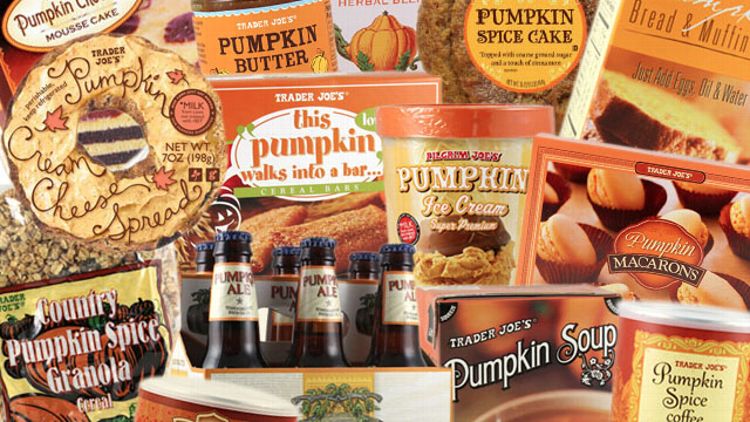 [Disclaimer: Trader Joe’s did not pay for this story. Our gastronomic stuntperson did this all on his own, for the love of the game.]

Right now the United States is in the middle of a collective seasonal affective disorder. The weather is apparently colder in most of the country (no fun!) and leaves somewhere are turning orange (I guess whoopee!), so restaurants and food dispensaries have rolled out their increasingly popular pumpkin-flavored products. But for a limited time only! Writer Felix Salmon posits that these items aren’t popular among consumers and producers because people are stoked on the taste of pumpkin; they are popular because people are stoked on the combined taste of sugar, cinnamon, nutmeg, and clove.

After some recent trips to the Southern California–spawned grocery store Trader Joe’s, I noticed they’d gone particularly nutso on the pumpkin stuff this year. I’m not much of a fan of pumpkins, nor am I much of a fan of seasons that aren’t warm, but this Monday I submitted myself to an experiment: Everything I ate or drank that entire day had to incorporate at least one pumpkin-flavored product that I bought from Trader Joe’s. The only exception was water (Trader Joe’s Pumpkin-Infused Water is apparently still in the R&D stage). Here are the results:

6:40 a.m. Wake up before my kids/sentient alarm clocks and can’t get back to sleep. Think about what a cast reunion of Cry-Baby in 2012 would look like for a while. Go to the kitchen to make pumpkin cranberry scones. I cook dinner for my family four or five nights a week, but I have very little experience with baking. The last time I really invested any time in the practice was more than a decade ago. I was a summer-camp counselor and I helped my group make three loaves of boogery challah that I didn’t even eat. This morning I mix up a batch of Trader Joe’s Pumpkin Cranberry Scone Mix using the numskull-proof instructions on the side of the box. They look like soggy granola.

7:05 a.m. My 4-year-old son comes into the kitchen in time to test the doneness of the scones with a bamboo skewer. After 12 minutes of baking at 350 degrees, they are not ready.

7:10 a.m. After 17 minutes baking at 350 degrees, the scones appear borderline ready, so I take them out to cool. They look like scones with jaundice and chicken pox.

7:12 a.m. I add 2/3 cup of Trader Joe’s Organic Reduced Fat 2% Milk to a packet of Trader Joe’s Pecan Pumpkin Naturally Flavored Instant Oatmeal and put it in the microwave. Knowing that Trader Joe usually underestimates how long it takes to adequately heat his products, I zap the bowl for one minute and 45 seconds, the higher option of the suggested times. After the beep, I find out that about a quarter of the oatmeal has been vomited across the insides of the microwave.

7:15 a.m. I give my 4-year-old a scone. What’s left of the oatmeal is too sweet for me, so I serve it to him along with some apple slices that I have to abstain from. My almost-2-year-old is up by now, so he gets a scone and apples, too. I pick at a third scone and decide it’s too dry, but then I decide that dry scones are as inevitable as Simon & Garfunkel on a Fleet Foxes Pandora station.

8:30 a.m. My wife takes the kids to day care. I give the sugar pumpkin I bought at Trader Joe’s to my 4-year-old for the school’s upcoming Pumpkin Day celebration. The specifics of Pumpkin Day weren’t discussed in the official pumpkin request. I go on IMDb to learn about Susan Tyrrel, who played Ramona Ricketts in Cry-Baby. Then I up reading too much about Richard Elfman’s movie Forbidden Zone.

9:20 a.m. Come home from walking the dog on what will become a 92-degree day and note that the baking and microwaving has made our place smell like the Cozy Flannels in Autumn Department at the home office of the Maple Heights Candles & Feelings Company. I keep the air conditioner on for the rest of the daylight hours.

11 a.m. Realize I haven’t eaten much today. I decide against trying out the Trader Joe’s Pumpkin Pancake and Waffle Mix and try again with the Trader Joe’s Pecan Pumpkin Naturally Flavored Instant Oatmeal. This time I cover it with a paper towel, which the directions tell you not to do. The result has a cinnamon gruel vibe, and I pour it down the sink. I make another package for one minute and 25 seconds, but I preemptively line the bottom of the microwave with paper towels as a splash guard. It’s shameful how much pride I feel when this works. I go to my office and try to research “shame pride.”

12:25 p.m. Go to the Trader Joe’s in South Pasadena anyway to buy eggs. I also learn from the woman restocking the Trader Joe’s Sprouted Whole Wheat Fiber Bread that Trader Joe’s This Pumpkin Walks Into a Bar … Cereal Bars are out of stock and are hard to come by.

2 p.m. Move the Trader Joe’s Pumpkin Chocolate Mousse Cake out of the freezer and into the fridge for the proscribed four to six hours of defrosting. Despite the cutesy apple and leaf designs on the top layer, personal expectations for it are low.

2:05 p.m. Bake the Trader Joe’s Pumpkin Bread & Muffin Mix. Easy enough. Then I go to my desk and Gchat about the new Godspeed You! Black Emperor album.

3:05 p.m. Take the pumpkin bread out of the oven and cut myself a slice. It’s the least cloyingly pumpkin-tasting thing I’ve eaten today.

3:15 p.m. Return to the kitchen for a second slice of pumpkin bread, but this time I spread on Trader Joe’s Pumpkin Butter, fully expecting to be nauseated by double-barrel pumpkin. Instead, the additional flavors of lemon and ginger — not just the trademark cinnamon, nutmeg, and cloves — are a relief. I start to think about the possibility of Señor Joe’s Chipotle Pumpkin Salsa, but then I remember the existing package of Trader Joe’s Zesty Nacho Kale Chips already dying of neglect in my pantry.

4:55 p.m Make myself a cup of Trader Joe’s Pumpkin Spice Chai Tea Latte Mix. It’s pleasant, but a few sips in I feel like I’m drinking a mug of the sugary sludge at the bottom of seasonal coffee.

6:30 p.m. I bring the kids back from day care, but decide not to subject my family to any more of this experiment. I restrain myself from sneaking some bites of leftover chicken and rice as I get dinner ready for them. I make myself a box of Trader Joe’s Pumpkin Soup. I pile on Trader Joe’s Fancy Shredded Mexican Blend of cheese and douse it with Cholula Hot Sauce. Eating dinner feels like spooning up just the “wet” part of a wet burrito.

9:15 p.m. Eat another slice of pumpkin bread with pumpkin butter while I retell the enthralling story of calling 16 Trader Joe’s about Honey Roasted Pumpkin Ravioli to my wife.

9:50 p.m. Drink a bottle of KBC Pumpkin Ale, which is not officially a Trader Joe’s product, but is sold at Trader Joe’s. Pair it with a partial OnDemand viewing of the second episode of Last Resort. Think about the time I was at the same wedding as Scott Foley, who I then remember is not the same person as Scott Speedman. Did you know his wife is the woman Seth Rogen hooks Paul Rudd up with at the end of The 40-Year-Old Virgin? I’m talking about Foley, not Speedman.

10:35 p.m. Take out the Trader Joe’s Pumpkin Chocolate Mousse Cake out of the fridge and begrudgingly take three pokes at it while I stand at the counter and look at a sink of dishes I’m not going to do until tomorrow. Return the pumpkin mousse cake to the fridge and look longingly at the exotic sliced maple turkey breast and Trader Joe’s Rio Red Grapefruit Juice that will be mine when I awake pumpkin-free.