D’Angelo’s Comeback Album Is ‘99% Done,’ Says Person Who Is Not D’Angelo 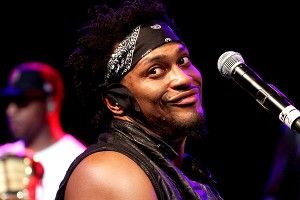 OK, granted, that person is Questlove, who’s been working intimately with D’Angelo for over a decade, including on recording sessions for this 13-years-in-the-making, as-of-yet-unnamed comeback album. And so, yes, when Questlove tells us D’s new one is not only nearly done, but also incredible — “It’s potent. It’s funky. It’s an extremely hard pill to swallow,” he gushed to Billboard on Monday — we listen. But let’s not forget that Quest is the same guy who’s been explicitly mind-gaming D’Angelo into releasing his album for a while now.

When GQ profiled D’Angelo back in the spring, the word was that the album was … yep, nearly done: “So when will he release [it]? D can’t say for sure. His managers and his label are pushing hard for September, before the Grammy deadline. But nobody’s banking on it … In mid-April, D and his band are back in the studio, this time in Los Angeles, supposedly adding the final touches. But everything hinges on D letting the music go.” That was followed up by D’Angelo popping by Bonnaroo, playing a so-called Superjam alongside his dude Questlove. Explaining the motivation, Quest said “I wanted him to see that [crowd reaction]. That’s a green light. Me doing it wasn’t, like, running out of jam partners. Me doing it was basically showing him, ‘Look, you are so missed you don’t even realize how much you are missed,’ hoping that this will be the adrenaline boost that will finally get him to turn his record in to the label. It’s done, it’s brilliant.”

Fast-forward to this week:

“I’m heading out to Asia right now praying that we’re still on schedule for when we said we were going to turn that record in,” Questlove told Billboard. “All last week, I was in the studio finishing (the album). We spent close to 18 hours, well not me personally because I have to go to ‘Fallon,’ but usually right after work. He’s the only person that I’ll actually go to the studio with and stay there to six in the morning, re-doing these drum parts. I won’t even do that for my own band, but I’ll do it for him. Right now, we’re just tightening up the loose ends. But I still stand by, 99% of it is done … if this record is not turned in by February, then something is extremely wrong. Because we worked to the bone in the entire month of January just to tighten up all the loose ends.”

Honest and verifiable statement of facts? Or yet another brilliant Questlove gambit?! You know, talk up the release date incessantly, until D’Angelo can’t do anything but go along with it. (It’s not an unheard-of technique: Young Jeezy says his label tried the same thing with Thug Motivation 103). Hopefully it’s the former, and by Valentine’s Day, a new generation of love-babies will be being spawned to the sexed-up sounds of leaked new D’Angelo. But if it’s the latter — well, let’s just hope the gambit works. Because Questlove is really making this thing sound next-level:

“I would not be far off by saying this is probably my generation’s version of Sly (and the Family Stone’s) ‘There’s a Riot Goin’ On.’ It’s potent. It’s funky. It’s an extremely hard pill to swallow. He’s one of those artists that have, of course, taken 13 years to follow up a record. It’s going to take you about 10 years to digest this record. Totally brilliant. Just the way this society works with music … being able to judge if something is a classic after the first listen, you can do that after thirty seconds on this. And the fact that we started this record in 2004, and it still sounds like it came out five years from now, it is a testament to the timelessness of it.”