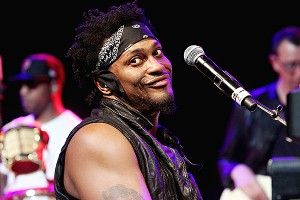 If you happened to read Amy Wallace’s excellent GQ feature on the return of D’Angelo — the reclusive onetime R&B titan who hasn’t released an album or even played live in the United States for 12 years — you know one thing is true: That return is not so much a sure thing. After running through a bevy of reasons as to why D’Angelo disappeared — which includes the predictable substance-abuse issues plus the not-so-predictable body-image issues, stemming from that infamously naked “Untitled” video — Wallace points out that, while D’Angelo has been recording and playing overseas, he hasn’t yet turned in his next album to his record label:

So when will he release his new album? D can’t say for sure. His managers and his label are pushing hard for September, before the Grammy deadline. But nobody’s banking on it. Sounding like a man who’s all too familiar with D-time, Tom Corson, RCA’s president and COO, says simply, “This year would be nice.” In mid-April, D and his band are back in the studio, this time in Los Angeles, supposedly adding the final touches. But everything hinges on D letting the music go.

Which brings us to this weekend’s Bonnaroo festival, which included an unannounced appearance by the man himself: Yes, D’Angelo’s first live U.S. performance in 12 years. During a set billed as Questlove’s Superjam, D’Angelo came out for 90 minutes of classic covers (Questlove and D’Angelo are longtime friends and collaborators, and the former will be backing up the latter as he makes more Stateside festival appearances later this year). While he didn’t play any original material, he did blaze through cuts like Jimi Hendrix’s “Have You Ever Been (to Electric Ladyland),” Led Zeppelin’s “What Is and What Should Never Be,” and The Beatles’ “She Came In Through the Bathroom Window” (which you can see, more or less, below). Afterward, Questlove explained that the surprise set was all an elaborate ruse to get D to finally drop that new album:

“I wanted him to see that [crowd reaction]. That’s a green light. Me doing it wasn’t, like, running out of jam partners. Me doing it was basically showing him, ‘Look, you are so missed you don’t even realize how much you are missed,’ hoping that this will be the adrenaline boost that will finally get him to turn his record in to the label. It’s done, it’s brilliant. I played on it. I know it’s brilliant. Now it’s just time to let his kids go and show it to the world. That’s what I’m here for.”

Holy crap — that’s commendably twisted. Hopefully it works out, of course, and Questlove gets his way, and D’Angelo’s comeback album wins 10 billion Grammys. But if the Bonnaroo reaction wasn’t quite enough to get our dude to let his music go, perhaps we should form a contingency plan? OK, here’s what I got: Let’s mobilize a force of D’Angelo superfans, willing and able to to hang out outside this guy’s house shouting hosannas 24-hours a day, and keep them on retainer, utilizing them only if D’Angelo’s spirits seem to be flagging. You know, just in case.

The Mad Men Finale: Don Draper Has a Toothache