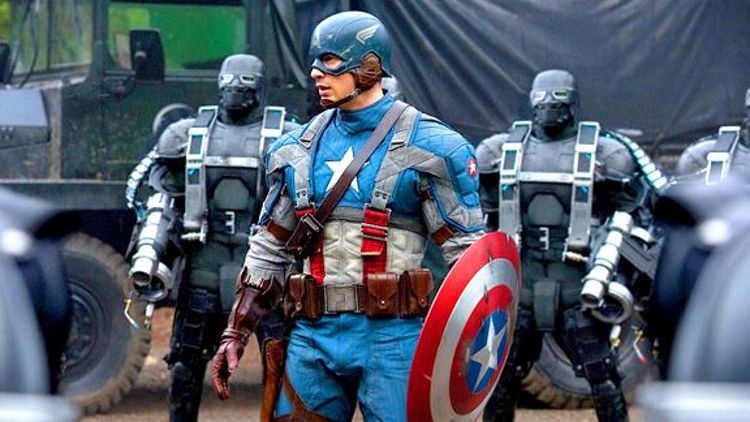 Much as Captain America once stormed Nazi battlements and emerged victorious, so too has the movie about him compromised the defenses of a nation’s critics. Which, to our eyes, is a major win for Marvel and their studio partner Paramount who have played this thing perfectly. In a summer awash with more middling superhero blockbusters than congressional debt proposals, one would expect a movie that is essentially a two-hour trailer for another movie to be fruitlessly savaged the way other low-art money-making machines tend to be this time of year. And yet the reverse is true: Captain America: The First Avenger is receiving grudgingly respectful notices, not raves exactly, a sort of shrugging, existential acceptance that things could be worse (Kevin James as Bucky, say). Let’s call them caves. And there’s an even better term for what’s befallen the critics themselves, as they melt in the idiotic heat of the season and it’s not a newfound appreciation for escapism. It’s Stockholm Syndrome!

“Pretty good fun … and while that isn’t saying a lot, it may be saying enough,” equivocates A.O. Scott in the New York Times. “Square … competent,” Owen Gleiberman sighs as he assigns a gentleman’s “B” in EW. “It goes without saying it’s preposterous … three stars!” declares a clearly defeated Roger Ebert. In his eloquent, well-argued cave in Salon, Andrew O’Hehir seems to be reviewing the (unfortunately buggy!) air-conditioning in the Paramount screening room rather than the film itself, blaming his apparent regard for the movie on a heat-induced “collective hallucination” (put that on the poster, why don’t ya!). This bold, war-of-blockbuster-attrition will and should be copied by studios for years to come: make something just the slightest bit not-terrible, release it in the height of summer, “accidentally” switch off the a/c in press screenings until the expository first reel is over with — oh and make sure Tommy Lee Jones is off studding ponies instead of giving destructively honest interviews — and the critics will wave white flags as you zoom past them on the way to profitability. Bravo, Paramount!

Exhausted, sweaty, delirious with heat and the awful promise of a new Planet of the Apes hanging over them like a James Franco-brandished sword of Damocles, the film critics of America have finally cried uncle — only in this case they’re crying Uncle Sam.

Marvel to Comic-Con: "Tell Me How My Avengers Poster Tastes"