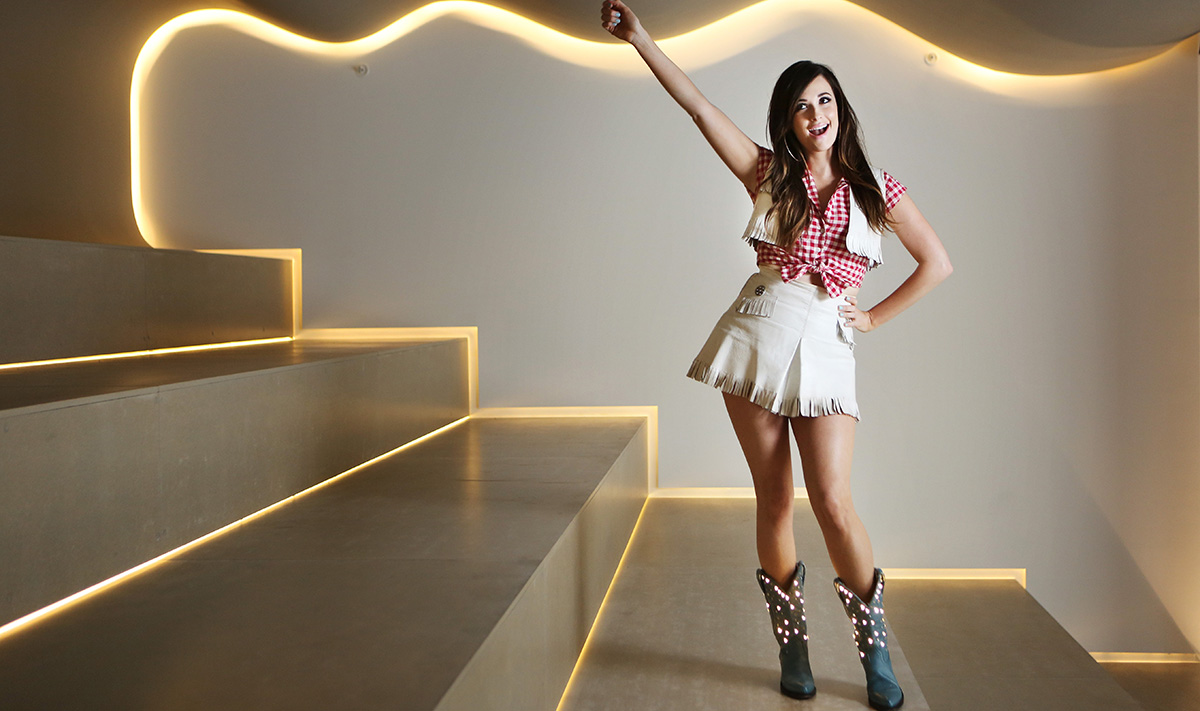 Kacey Musgraves is a 26-year-old singer-songwriter who’s dutiful about crossing every “T” (for Texas, her home state) and dotting every “I” (for insurgent, which is how she’s often classified) on her “real country” résumé. Musgraves’s forthcoming LP, Pageant Material, was recorded at RCA’s legendary Studio A in Nashville and sounds like it — the album’s jangly guitars, crisp snare cracks, calloused hand-claps, and velvety strings coalesce into an airy honky-tonk symphony. It’s a callback to an era that predates even the ’70s outlaw heyday of Willie Nelson and Gram Parsons, both of whom are name-checked on Pageant Material.1 There isn’t a sound on Pageant Material that couldn’t have been produced in 1965. It’s like a museum where Nashville’s lost twang has been preserved in amber.

But if Musgraves were only a retro-minded traditionalist, she wouldn’t have become the first country artist to grace the cover of indie-music magazine The Fader this month. Like so many self-styled country-music outsiders before her, Musgraves has been presented as both a guardian of a degraded art form — The Fader called her a “back-to-basics corrective” for the scourge of bro-country — and a forward-thinking progressive inching her genre ahead.

The breakout song from Musgraves’s acclaimed 2013 major-label debut, Same Trailer Different Park, was “Follow Your Arrow,” an empowerment broadside that included a smirky shout-out for gay rights. (To a presumably female subject, Musgraves sings: “Kiss lots of boys / or kiss lots of girls / if that’s something you’re into.”) For many listeners, particularly coastal media elites, a pro-gay country song was akin to a squirrel on water skis.

I could get behind “Follow Your Arrow” as a political gesture. But as a song it’s pretty facile, like if Phoebe from Friends wrote a marriage-equality anthem. (Musgraves cowrote it with frequent collaborators Shane McAnally and Brandy Clark.) Personally, I find the polemicist aspect of Musgraves’s persona to be her least interesting attribute. After spending the past few days with Pageant Material — a more relaxed, confident, and affecting follow-up to Same Trailer Different Park — I’ve come to believe that Musgraves has been miscast. Playing the upsetter country-music messiah goes against her strengths. Deep down, she’s not really an iconoclast, but rather a clever student of the lost art of classic country.

While much of Pageant Material was written around the time of Same Trailer, the songs are subtler and culminate in less obvious payoffs. If Musgraves was pressured to deliver a can’t-miss hit on her second record, she apparently brushed it off — even the semi-novelty song “Biscuits” is too sly and laid-back to stand out amid the boozing and uproarious truck worship of country radio. But those looking to Musgraves to take up arms against Luke Bryan and Jason Aldean might also be disappointed. When Musgraves obliquely criticizes the country establishment on “Good Ol’ Boys Club” — taking a veiled shot at Big Machine, the label that Taylor Swift built — it feels less like forming ranks than like aligning herself with country upstarts from throughout history. “I guess I’ve always kind of been for the underdog,” she sings, just as everyone from Loretta Lynn to Kris Kristofferson to Jason Isbell were.

Musgraves’s primary concern on Pageant Material is craft — she worked closely with a team of collaborators that includes top Nashville songwriters-producers such as McAnally, Clark, Luke Laird, and Josh Osborne, and each lyric is finessed to its economic essence, every stringed instrument buffed to a sparkling, sepia-toned shine. The joy of Pageant Material is reveling in the accumulation of small, deceptively simple pleasures — the way a rural community is summed up in “This Town” as a “zip code, a VFW, a good Mexican restaurant, [and] a beauty shop or two”; the dreamy drone that gives away to a stinging pedal steel solo in “Somebody to Love”; the casually impeccable construction of a lyric like “Who needs confetti, we’re already falling into the groove” on the sweet “Late to the Party.”

You suspect that Musgraves has pored over thousands upon thousands of songs and silently noted what makes them tick. She has already been doing this for half her life — her first self-released album came out at age 13, and a staff writer job with a Nashville songwriting publisher followed at 21. Musgraves is essentially a pop-country artist, and her specialty is songs that immediately engage, then deepen over repeat listens, no matter if radio actually plays them or not.

In the Fader story, Musgraves claims the great journeyman singer-songwriter John Prine as a personal hero. More than Nelson or Parsons, Prine works as both an apt reference point and an aspirational benchmark for Musgraves.

Like Musgraves, Prine initially was trumpeted as a game-changer — his stunning 1971 self-titled LP made him one of the first artists to be labeled “the next Dylan.” But as his career unfolded, Prine shied away from big statements and instead became a master miniaturist, carefully contemplating the modest triumphs and enduring struggles of regular people living ordinary lives. His calling card became funny songs with an undercurrent of pathos —a personal favorite is “Christmas in Prison,” a love song sung from the perspective of an inmate, who memorably declares that his beloved is “sweeter than saccharine at a drug store sale.”

Musgraves is getting better at pulling off that sort of delicate musical jujitsu. Take “High Time,” the best track on Pageant Material — superficially, it’s another modern country ditty about escaping everyday drudgery. “I’m gonna turn off my phone / start catching up with the old me,” Musgraves says, like she’s settling into a beach chair as the Zac Brown Band play on the tiki bar’s PA. But there’s a nagging melancholy in her voice, a vague concession that there is no escape, that this is all there is. You feel it when Musgraves says “I’ve been too low” as the song fades.

Like Prine, Musgraves’s voice is warm but ultimately functional; she’s really a songwriter-singer, an introspective folkie who just happens to look like a pop star. Not only would it not be Musgraves’s style to sing the sort of power ballads that Carrie Underwood routinely crushes, it also doesn’t suit her skill set.

Musgraves is part of a loose fraternity of insider-ish artists that won’t or can’t accommodate the demands of commercial country. That crew includes Ashley Monroe, a member of the Miranda Lambert side project Pistol Annies and, like Musgraves, a keen chronicler of young women living in 21st-century small-town America. There’s Chris Stapleton, writer of hits for Kenny Chesney and Darius Rucker, whose Southern-rock debut Traveller ranks among 2015’s best albums. And there’s also Clark, a songwriter’s songwriter who has co-written smashes for Lambert and the Band Perry and contributed to both of Musgraves’s albums along with releasing her own critically acclaimed self-titled LP in 2013.

Back in the ’90s, the term “alt-country” was applied to any artist who appeared mildly disdainful of the Nashville establishment. But the tension with Musgraves and her cohort is that they’re neither fully part of the mainstream nor belong on the fringes. They make their living — if not exactly their names — as part of that establishment. It’s just that, in the upside-down world of country music in 2015, writing thoughtful three-minute songs and recording them with tasteful musicianship makes you an outlaw.

Pageant Material probably won’t make Musgraves any more famous among country’s base. In fact, I doubt that a record more out of step with what’s currently on country radio will come out of Nashville this year. But you get the feeling that this is by design. Musgraves is no longer aiming to go broad with meme-friendly viral hits. Instead, she’s creating a world of her own that promises to grow more vivid with each lovingly assembled LP.

Digging in the Crates With Rob Corddry: The 'Ballers' Star on His New HBO Gig, 'Childrens Hospital,' and Finding the Perfect Joke

So Emotional: The Sensational High of ‘Inside Out’ and Utter Shock of ‘The Tribe’