Can’t Kill His Vibe: How Kendrick Lamar Took Advantage of Imagine Dragons and the Grammys 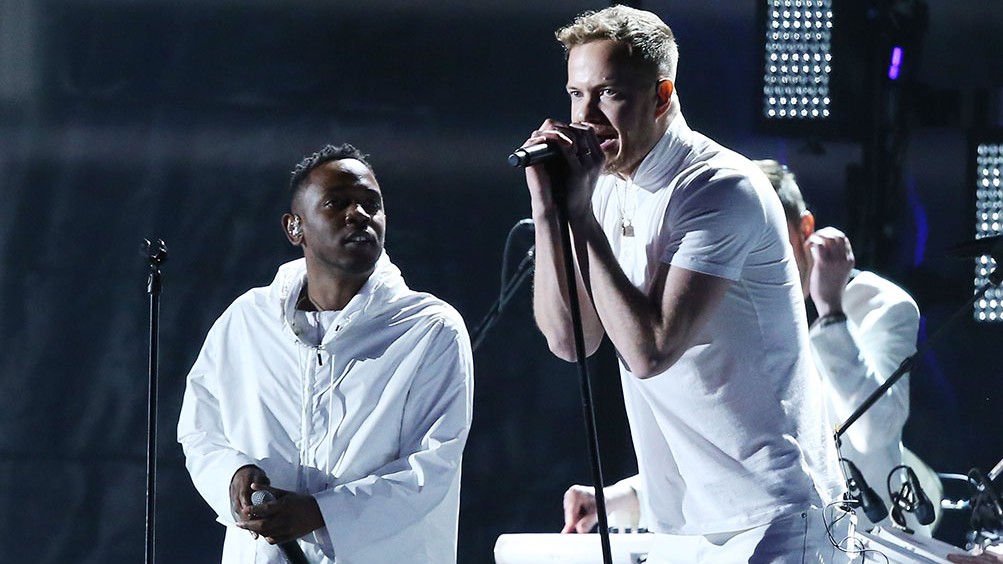 This week’s postmortem conversation about Sunday’s Grammys telecast has centered on cultural appropriation, specifically how it applies to the newest most hated pop act among music critics, Macklemore and Ryan Lewis. In a thoughtfully evenhanded though ultimately lacerating piece in the New York Times, Jon Caramanica bemoaned the duo’s victories in the major rap categories, reasserting his previous argument that Macklemore’s success has taken place without the shepherding of “black gatekeepers,” fatally undermining the rapper’s credibility. Rewarding this with an armful of trophies was simply too much for Caramanica (among many other observers) to stomach.

“In a nutshell, this is the entire cycle of racial borrowing in an environment of white privilege: black art, white appropriation, white guilt, repeat until there’s nothing left to appropriate,” Caramanica wrote Monday. Since then, it’s been a media free-for-all on hit pieces about Macklemore’s awfulness and the Grammys’ noxious non-inclusiveness.

I’m not about to dispute either point. However, there was another instance of cultural appropriation at the Grammys that has been far less remarked upon, even though it may end up being more lasting as a takeaway moment than Macklemore winning a bunch of awards of dubious value. I’m referring to the collaboration between rapper Kendrick Lamar and the thoroughly beige rock band Imagine Dragons that merged Lamar’s “m.A.A.d city” with ID’s ubiquitous hit “Radioactive.”

After surveying the reactions of music writers I follow on Twitter, and the mélange of family members, friends, and high school acquaintances I follow on Facebook, I’ve concluded via anecdotal evidence that this is a performance that critics generally hated and regular people generally loved. It’s likely that critics were predisposed to loathe it on the same ideological grounds Caramanica succinctly laid out. (Myself included.) Casual listeners, however, tend to care less about the sanctity of genres if there’s a thrillingly engaging spectacle to distract them from the fine print.

In terms of the critical reaction, Slate’s Carl Wilson offered the most withering assessment of the duet in a piece provocatively (if also accurately) titled “White People Win the Grammys.” He described the pairing as a “gross injustice” for Lamar, who Wilson claimed was “being forced to perform with one of the most anodyne ensembles of this or any other century” in spite of being “one of the freshest voices in rap.” Compounding the indignity was Lamar losing in all seven categories he was nominated in, including Best Rap Album, which went to Macklemore and Ryan Lewis’s The Heist. No matter the undue burden placed on Lamar by the frightfully Caucasian award show, “miraculously, he crushed it anyway,” Wilson concluded.

I have no idea if Lamar was truly “forced” to perform with Imagine Dragons on Sunday night. But my guess is that nobody had to coerce him into signing on with the makers of the fourth-best-selling LP of 2013 for a rendition of last year’s third-biggest-selling song, especially since the arrangement and staging set him up to dominate the audience’s attention. Lamar might be the hottest young star in hip-hop, but his success on the pop charts has been limited. (His highest-charting single, “Swimming Pools (Drank),” peaked at no. 17 on Billboard’s Hot 100.) You could argue that Imagine Dragons were trying to exploit Lamar’s effortless cool to spruce up their bland, overplayed signature track. But it’s not as if Imagine Dragons need to be cool (or need certain segments of the media to perceive them as cool). Imagine Dragons are doing just fine as a commercial enterprise. So is Lamar, but he could stand to be exposed to more non-rap heads.

Looking back on the performance several days later, I think it’s clear that Kendrick used Imagine Dragons more than Imagine Dragons used Kendrick. He had more to gain from the partnership, and he maximized the opportunity with a bracingly aggressive, showstopping turn that represented the power of contemporary rap far more vividly than any award could have, and also transformed “Radioactive” into a truly kinetic, hard-hitting song. During a night when some of the brightest talents in hip-hop and rock were treated with comparable shabbiness by the Grammys, Lamar (with the not insignificant assistance of Imagine Dragons, lest it be forgotten) was left to wave the flag for both genres in convincing fashion.

The comparison most often made in the wake of the “Kendrick Dragons” mash-up was to Collision Course, the 2004 EP from Jay Z and Linkin Park. Imagine Dragons is essentially the Linkin Park of 2014, given its rap-and-pop-oriented approach to rock (super-producer Alex da Kid is a principal engineer of ID’s debut album, Night Visions) and nefarious hold on the radio airwaves. While hip-hop aesthetes tsk-tsked Jay Z lowering himself to join up with a bunch of douche-y rap metal guys, the business argument behind Collision Course was sound. The album moved nearly 2 million copies, and the single, “Numb/Encore,” was played on rock stations, the one area of radio Jay had not yet conquered.

At the risk of provoking conniptions among rap and rock snobs alike, I wouldn’t be shocked if Kendrick Lamar and Imagine Dragons wind up making a Collision Course–type record in the near future. Immediately after the Grammys, a studio remix of “Radioactive” featuring a guest spot by Lamar appeared on iTunes. It currently rests at no. 3 on the best-sellers list. Lamar is on the song for only a minute, but it’s so magnetic that you want to hear more.