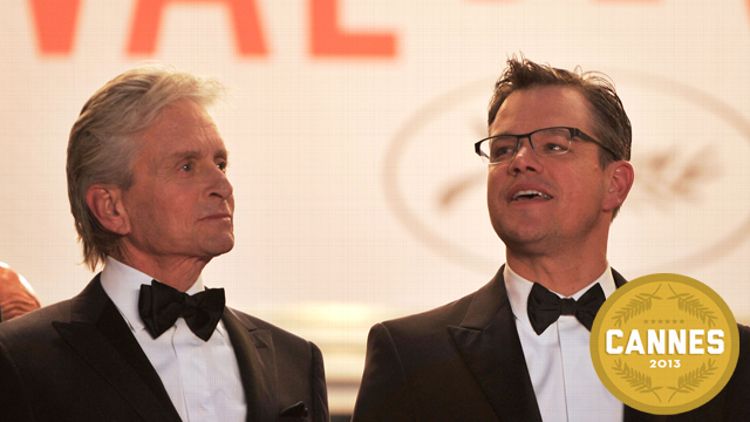 When a week of constant moviegoing fails to rouse either unanimity or contentious division, the world’s film press gets a little antsy. Where is The Movie? You know, the one that will bring us to tears or to war. Where’s the movie that incites peals of laughter, intentional or otherwise? Where on earth are the Oscar-caliber, midmovie storm-outs? The applause has been tepid. The boos have been virtually nonexistent. No one seems willing to kill for anything. No one has any idea what the Steven Spielberg jury will or should do.

That sense changed this morning with the unveiling of Steven Soderbergh’s Liberace movie Behind the Candelabra. When the film ended, the house applauded Soderbergh’s name and cheered for Michael Douglas and Matt Damon. The song that sends you floating up the aisle and through the exits is Douglas doing “The Impossible Dream” as Liberace. It’s a strangely moving moment in exactly the same way that the film itself is strangely moving: It’s determined to see beyond the obvious kitsch of Liberace to find something close to the man.

The wigs, the constellational sequins, the giant piano-cars that glide onto the stage, the plastic surgery and opulent tackiness, the sheer Vegas of it all: They become more than shameless accoutrements. They become endearments, and they become so mostly because Soderbergh, Douglas, and the screenwriter Richard LaGravenese are able to ignore the flamboyance just as America did for almost 30 years. They didn’t see a freak or a queen. They saw a talent and a friend. The magnitude of Liberace’s fame remains one of those phenomena you can’t quite believe began in the 1950s and lasted through the dawn of the AIDS crisis.

Shrewdly, the movie doesn’t explore how gay Liberace seemed. It explores how gay Liberace was. Behind the Candelabra is a love story that happens to involve a very famous person. Liberace was born Władziu Valentino Liberace, but everyone called him “Lee.” Backstage after a show one night, a friend of his named Bob (Scott Bakula) introduces Lee to Scott Thorson, a former foster kid and aspiring veterinarian, whom Bob picked up in a Los Angeles gay bar (their introduction is the movie’s opening scene). Lee (Douglas) comes on to Scott (Damon), who’d been rightly astonished by Lee’s onstage showmanship earlier in the evening. Eventually, an arrangement is proposed, and the arrangement turns into a marriage of sorts.

Scott moves into Liberace’s palace and receives a separate bungalow. From 1977 to the early 1980s, Lee’s casas were Scott’s. And eventually so was his face. One of the outré dimensions of their May-December coupling, according to Thorson’s 1988 memoir that LaGravanese has adapted, was Liberace’s wish that Thorson have surgical work done to more closely resemble himself. (Rob Lowe plays their doctor as a Ken doll version of Katherine Helmond’s face in Brazil, and he got the biggest laughs this morning.) The surgery was both vanity in extremis and perhaps a ruse for a public obsessed with the star finding a woman to marry — Scott, who plays Lee’s valet in his live shows, looks like he could be his boyfriend’s son. The pills prescribed for both the recovery and the Hollywood diet he’s put on turn addictive, and Lee dislikes the moods they cause.

But the movie understands and respects the affection that passes between these two. When they lie in bed one evening and Lee says he wants to be the family Scott never had, you feel the younger man let go of his apprehensions (he seems creeped out by Lee’s eager flattery); you feel him fall not simply for a father figure but a lover. It’s important, I think, that both men are Midwesterners, from Wisconsin. In divergent ways, they’re compelled to maintain a sense of wholesomeness. (Lee tells Scott he is still a devout Catholic. He looks after his Polish mother, whom Debbie Reynolds plays with relish, steel, and accents. Scott insists that he’s bisexual.)

The love doesn’t last, not because they’re gay, but because not all love does. The film has arrived at the right cultural moment. It’s no longer shocking that Liberace was gay. It’s shocking that he was so gay in plain sight for so long. Douglas and Damon are playing homosexuals, and, even though that still rarely happens at the movies or television, it doesn’t feels as momentous as it did when Brokeback Mountain was released eight years ago. The event here is that a big studio lacked the confidence and imagination to finance and distribute the movie theatrically. It’s airing instead on HBO this weekend.

Its inclusion in the main competition at Cannes only underscores a film studio’s missed opportunity, not to mention a kind of squandering of Soderbergh’s cinematic elegance. Rarely does chintz achieve the casual grandeur that it does here. It’s impossible to imagine that the film, made with the relatively modest budget Soderbergh had been seeking, wouldn’t have been some kind of hit. Liberace wasn’t a cult figure. He was a star, and Soderbergh treats him accordingly. So does Douglas. He does lapse into his usual slurry, word-swallowing self. But for the most part, he elongates and enunciates Lee’s words until the character sounds like a man who enjoys the music in his speaking voice. Douglas also discovers a brashness he’s always too brazenly masculine to investigate. The sight of him sitting at a piano swiping gently but quickly at the keys while he patters with the audience gets at both Liberace’s uncanny self-comfort and the comfort Douglas locates in approximating it.

The character suits the actor, in part, because Liberace wasn’t in a gendered drag. His drag constituted a guise of propriety. He didn’t hide his personality. He hid his peccadilloes, just like the men of Douglas’s famous sex roles (Fatal Attraction, Basic Instinct, and Disclosure). During the packed press conference after the film, Damon joked that he now had something in common with Glenn Close, Sharon Stone, and Demi Moore, that now he, too, had been done wrong by Douglas.

There is an Interview With a Vampire quality to Behind the Candelabra. An innocent loses himself to a kind of undead creature of the night. Scott fears domestic entombment. But the relationship doesn’t play out as Transylvanian grotesquerie. It’s much sadder than camp or satire. It’s true melodrama. Scott becomes the trophy of a man obsessed with youth and statues and things. In the same way that Douglas doesn’t play Liberace’s swishiness, Damon isn’t playing the drug addiction. He inhabits the sinking awareness of romantic demise and really gets at the sting of disillusionment. The film could have been high mockery or cruel derision. But it’s a serious movie that veers into tragedy but, suddenly, detours toward the ethereal. The last, loving image of Liberace is of him ascending toward the rafters, taking his place as a sequin on that great big fur coat in the sky.

Who knows what the jury will do with that movie. But in the last couple of days, Spielberg has gotten a little more to work with. The night before the Soderbergh, the festival unveiled La Grande Bellezza (The Great Beauty), Paolo Sorrentino’s enormous bauble of Italian decadence and the most visually ambitious film in the competition so far. It’s as obsessed with opulence as Behind the Candelabra, but Sorrentino has something almost better than Soderbergh’s clinical precision. He has vulgarity.

The movie is 140-something minutes of being fire-hosed with champagne, of having your face rubbed between a woman’s giant fake breasts, of doing a dance called la colita until your colita falls off. Sorrentino gives us dinner parties, garden parties, cosmetic injection parties, all among the Roman middle-aged and super-rich. (This is Spring Breakers on Cialis.) His interpolator is a silvered writer named Jep Gambardella (Toni Servillo) who himself lives in aristocratic splendor and is very much the sort of person he’d chronicle in one of his novels or magazine profiles. He misses his youth the way you’d miss someone who broke your heart, and he spends the film trying to recapture it with spectacular binges of sex, disco dancing, and speculative philosophizing.

Decadence, fabulousness, and delusion bind this movie to Candelebra, Valeria Bruni Tedeschi’s A Castle in Italy, which screened yesterday, and The Great Gatsby, which opened the festival last week. But Sorrentino, whose last two movies were Il Divo, with the great Servillo, and This Must Be the Place, with Sean Penn, wants to assess modern Italy with the same dimension of affluence and excess as Federico Fellini’s La Dolce Vita. What I love about this movie is that Sorrentino believes he’s topped that classic. In some ways, he has. It’s got gassiness, self-indulgence, incoherence equal to Fellini’s. Sorrentino just has a better sense of wild satire. Fellini had a way with grotesquerie, but he thought the comedy would speak for itself. Sorrentino knows how to structure a joke. At some point, he concocts a sequence in which a bratty girl throws paint at a giant canvas in front of dozens of partygoers. The length of the sequence becomes funny, and ends with a human-condition punch line that’s damning, sly, and apt. This movie also has all of Berlusconi-era Italy to work with, and Sorrentino treats the times like a vast forest fire that simply has to burn itself out before anything good can grow in its place. A colleague overheard me enthusing about the film and said it’s a just good director farting in the dark. Perhaps. But as that sort of thing goes, this is fragrant stuff that goes off like the Fourth of July.