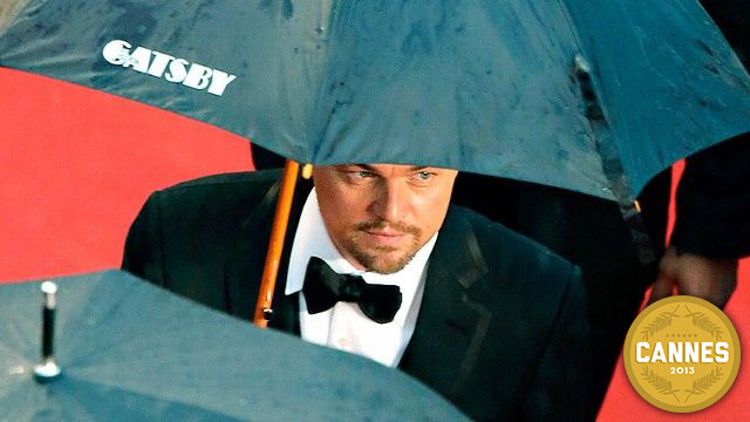 It’s easy to prepare for most of what goes on at this festival. You know that at some point you’ll nearly be run over by any of the official black sedans that could be dropping off Emma Watson then heading off to Transporter 7. You know you’ll wind up trapped watching a three-hour talkathon that’s two hours too long. You know you’ll want to marry a movie that all your friends think is totally wrong for you, which means it’s really just wrong for them. These are things you can anticipate. But even though you manage to pack two-dozen Balance bars, six neckties you won’t wear, and a lint brush, even though there’s this service called the weather report, what you never quite see coming is rain. It’s so sunny here so often that it just never occurs to you to pack protection. This is how you end up borrowing a plaid hotel umbrella that has nothing to do with the tuxedo you’re wearing — not even your socks.

This is to say that the start of the 66th Cannes Film Festival was wet, and the water put a damper on the pandemonium that typically characterizes the first day here. To help raise the curtain on the next two weeks, the festival selected Baz Luhrmann’s The Great Gatsby, which opened in North America last Friday and premieres in Europe this week. Lots of festivals should want to kick things off with a Luhrmann movie, not just the world’s most prestigious one. In addition to providing stars to walk the vast red carpet (Leonardo DiCaprio, Tobey Maguire, Carey Mulligan, Amitabh Bachchan, on down) that leads to the Palais, one of Luhrmann’s extravaganzas also ensures a movie whose pomp is equal to the media circus it inspires. But it must be said that the sogginess of the evening matches what you feel when Luhrmann’s movie is finally over. Earlier, during the afternoon press conference, the director held court, flanked both by the actors and crew, including his wife and business partner, Catherine Martin. He discussed Jay-Z’s involvement as the film’s music supervisor (according to him, the drug dealer turned rapper turned impresario felt a deep connection to Jay Gatsby’s self-invention). Luhrmann defended the movie against its critics, and not unreasonably breathed a sigh of relief that his concoction appears to be a hit.

Back outside, the DJ mixed things up with Euro-disco and some Jazz Age staples that sounded like they could have come from the movie’s 1922 setting. But you missed the heavy pump of the pre-show soundtrack. Normally you can feel the pulse as you head south toward the Promenade de la Croisette. You can hear the roller-coaster screams as the assembly line of black sedans stops and releases another star. There are people hanging from the balconies above the Chanel store. There’s a general sense of OMG and “does anybody have a ticket please?”

The section of the Croisette that sits at the foot of the Palais was still mobbed, and you could still feel the usual air of excitement and desperation. But the weather forced the volume measurably down. The roller-coaster screams weren’t as deafening, and the hype man who does the red carpet play-by-play rarely seemed hyped enough. It was as if he were all wet, too. What was taking place could rightly be called “festivities,” but even once Freida Pinto, who’s not in Gatsby, showed up in a stunning pink, belted halter-neck number, you missed the spark and snap of other, drier years. You were too worried about someone’s umbrella stabbing you in the eye to really go crazy. Fireworks are impossible in the rain.

From the lobby of the Palais, it was obvious that the guests, famous and not, were just eager to be off the mealy carpet. Before the ceremonies began, most of the cast sped past gawkers and inside the enormous Grand Théâtre Lumière. Joel Edgerton has a role as Daisy’s husband, Tom. He entered the lobby almost unseen by the phalanx of black-tied stargazers, who’d already been blinded by DiCaprio and Maguire. Edgerton wore a tuxedo and a beard and was holding the hand of a bronzed beauty in a chipped-gold dress. He looked like a carpenter on a particularly hot date. He’d been preceded by the women associated with the film, one tall, thin creature after the next — Mulligan, who plays Daisy Buchanan; Elizabeth Debicki, who plays Jordan Baker; and Florence Welch, who plays with the Machine. Welch actually stopped before she entered (her band has a song on the soundtrack) and said, “This is it.”

By “it,” she might have meant the official ceremony, which began with the arrival of Audrey Tautou, who, as the mistress of ceremonies, took the stage and proceeded to speak extemporaneously for many minutes in French about, among other things, how she came to be standing before us. The women who do this job — Ludivine Sagnier and Mélanie Laurent are two recent emcees — tend to be young and pert. Tautou was as coquettish as you’d as expect the star of Amélie to be, tilting her head, pursing her lips, popping her eyes. But the rapt attention she commanded also seemed apt for a woman who also once played the shock daughter of Jesus Christ. Her gaze seemed to fall on every single person in the house, and, in turn, the members of the audience sat silently as she took them. That’s how serious the cinematic reverence is at Cannes: Even Amélie holds a room.

Tautou’s keynote address segued into an introduction of the jury, including this year’s president, Steven Spielberg. The backdrop for Tautou was a curving black wall that repeated the words “Festival de Cannes” in capital letters. The wall also housed a glowing mountain landscape with a city nestled at its base. When Spielberg took the stage, the mountain scene flew up into the rafters and down came what can only be described as an enormous fish bone. It was supposed to be the Palme d’Or, but it was done in a chalky white as opposed to gold so, at that scale, you were free to free-associate. (Another possibility? A Claes Oldenburg tribute to Jurassic Park.) In any case, Spielberg was given a rousing standing ovation that lasted about two minutes and clearly touched him.

The festival also presented a montage culled from his films that features some of his messes (um, Hook, Amistad, we’ll start with you). But it also managed to bring out all the philosophy and existentialism in a poignant way that only the French could. Spielberg said thank you and introduced his fellow jurors: the actors Nicole Kidman, Daniel Auteuil, Christoph Waltz, and Vidya Balan and the directors Ang Lee, Cristian Mungiu, Lynne Ramsay, and Naomi Kawase. This is an absurdly strong collection of filmmakers, each with a distinct cinematic personality; Kawase’s labored animism is the most aggravating, but she is deeply, mysteriously loved here so there’s no point in doing more than rolling your eyes. In a different year, the president could have been Lee, Auteuil, or Kidman, who came out in pink heels and a structured Dior gown elaborately mosaicked with flowers; the audience seemed delighted by its loveliness — frankly, so did she. That they’ve all agreed to unite under Spielberg is a further testament to the galactic reverence for him.

The jury sat in a row of sleek white chairs that made them look ready to operate the Enterprise and watched as Tautou introduced a jazz ensemble, small choir, and the bald and tuxedoed singer Krystle Warren, who did “Miss Celie’s Blues” from The Color Purple. For half the performance, Spielberg’s hand tapped his right thigh in time with the song’s juke joint–y piano. Before he introduced the jury, Spielberg spoke for everybody seeing movies here this year when he said he hoped to be surprised, moved, and changed. And maybe dry, too.