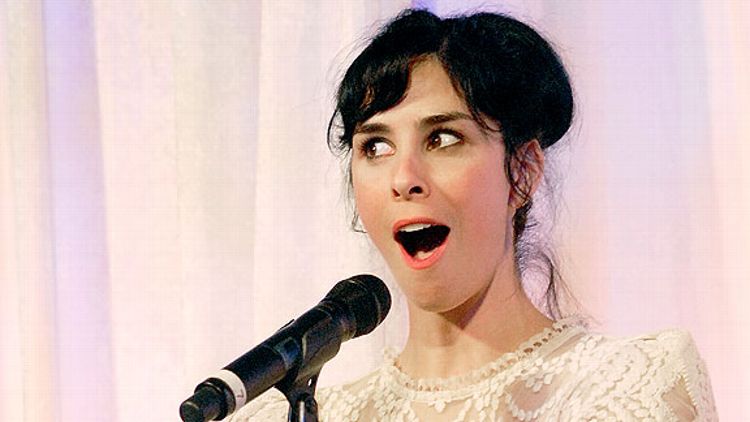 On Thursday, NBC officially got back into business with a polarizing wild-card named Silverman. Fortunately for the network — though unfortunately for those of us who cover it — former network president (and tiger aficionado) Ben Silverman remains bro non grata in Burbank. Instead, the peacock welcomed comedienne Sarah Silverman into its nest with what Deadline calls a “hefty” put pilot commitment for a new sitcom. (A “put pilot” deal is a development contract that guarantees the filming of a pilot and comes loaded with penalties that kick in if the pilot is not aired. In other words, you will see this show, one way or another!) The proposed program would have producer Ron Howard taking an active role behind the scenes much as he did with another left-of-center network comedy project, Arrested Development, and center on a woman’s experiences on the single scene after a decade-long relationship.

For Silverman, the deal represents a bold play for the big leagues. The self-proclaimed bedwetter has worked hard to establish a quirky but consistent career on the mainstream fringe, thanks to her persistant stand-up, one-woman shows and, most recently, an eponymous program on Comedy Central. The latter seemed for a time to be the perfect outlet for Silverman: on the show she played to her actorly strengths (or limitations) by portraying “Sarah Silverman,” a sweet-faced, filthy-mouthed woman-child who hung out with her sister and various alt-comedy pals, got crunk off cough syrup, and occasionally had sex with God (who, naturally, took the form of a silver-haired African-American dude). After three seasons, though, the show disappeared completely up its own butt (an image that Silverman herself would love); the final episodes a messy hodgepodge of asinine (again!) absurdism that lived or died on Silverman’s ability to innocently smile her way through gags about pedophilia and the word “retarded.”

As a performer, Silverman’s schtick is confrontational by design and yet Silverman the person can come across as smart, canny and engaging — as she was on Marc Maron’s WTF podcast — particularly so when keeping talk of her father’s balls out of her mouth. The recent success of Louie on FX — in which Louis C.K blends stand-up with a shockingly honest world-weariness — might have served as a guide for the next phase in Silverman’s career, as she moves from talking about shit to actually dealing with it. But instead she’ll attempt to adapt to an environment that might not be as forgiving towards A-stories built around 9/11 and her sister’s pubic hair all in the service of a career move — a sitcom built around a successful stand-up — that went out of fashion around the same time as Jerry Seinfeld’s puffy shirt.

For NBC, the deal makes a little more sense. For one, the network is still trying to dig itself out of a near-impossible ratings hole — the more star power it can attract, even indie star power, the better. Right now NBC’s best sitcoms — 30 Rock, Parks and Recreation — are beloved by critics and generally ignored by the rest of America. And while there are certainly perks to playing to the Pitchfork crowd, we’re confident the suits at CBS are much happier selling-out arenas. If Silverman’s show is a hit, it could give new network boss Bob Greenblatt the credible cover to axe a show like Community, which is fiercely beloved by everyone except those with Nielsen boxes. (Interestingly, Community was created by Dan Harmon — who also played a similar role in the early days of The Sarah Silverman Program until he was fired by the boss lady herself. Could history repeat itself?) Alternatively, Greenblatt could slide Silverman rather easily into the deck of mouthy female comics he’s been collecting (including Whitney Cummings and Chelsea Handler). Combined with the Christina Applegate/Maya Rudolph-starrer Up All Night, Greenblatt could conceivably take all four shows and create an entire double-x chromosomed comedy block, a sort of PG-rated version of the successful line-up he built at Showtime with Weeds, The Big C, Nurse Jackie, and United States of Tara.

On the whole, though, we have more faith in Silverman’s ability to clean up her act than NBC’s chances of doing the same. Assuming someone keeps a firm hand on the bleep button and keeps the set flush with thesaurii she should be fine. As for Jimmy Kimmel — an ex who recently got out of a long-term relationship with Silverman — he might want to consider having some lawyers draft a cease-and-desist letter or two, just in case.