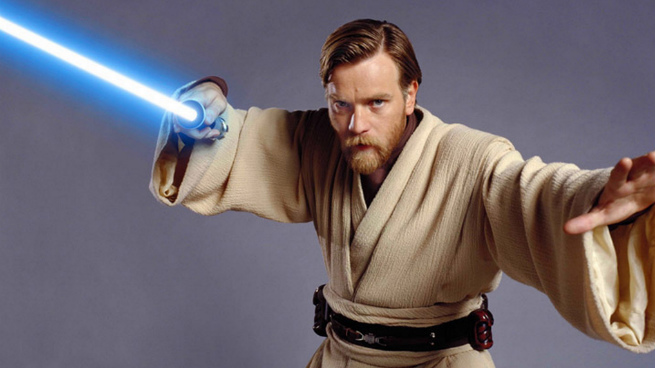 The first issue of Premiere magazine I ever bought had Obi-Wan Kenobi on the cover. It was the spring of 1999, I was in eighth grade, and Episode I was a bantha’s breath away. I was very much on to Ewan McGregor at this point. Despite the age restrictions, I had somehow finagled copies of Velvet Goldmine and Trainspotting from the public library, and the “Choose Life” poster hung on my bedroom wall. I had xeroxed copies of his Vanity Fair photo spread plastered on the inside of my locker.

McGregor was cool; even a chronically uncool tween like myself could see that. In 1999, one could logically assume that being cast as the young Obi-Wan would only elevate his hip stature. And yet, I think it can be generally agreed that McGregor’s commercial career peaked with 2001’s Moulin Rouge, a cultural lightning rod for sure, but also a goddamn postmodern musical by Baz Luhrmann. Then he did Down With Love and Big Fish. And meanwhile, every three years we were getting treated to antiseptically CGI’d shots of him waxing philosophical about midi-chlorians. He was only in his early thirties, but he was suddenly on the other side of the galaxy from Curt Wild (link NSF Life). I think about the alternate universe in which McGregor was never Obi-Wan probably more than the average human.

Oscar Isaac and Adam Driver, fresh off cred-building turns in Inside Llewyn Davis and Girls, respectively, are cool, but yesterday’s Star Wars casting announcement is a great disturbance in the force of their respective careers. I don’t really care to postulate about what kind of characters they’ll be playing (Driver is said to be taking the villain role); I’m mostly curious about how the J.J. Abrams–helmed third trilogy will benefit the actors it employs. Were George Lucas still at the wheel, it would most certainly spell doom, but we’re in uncharted territory now. Maybe Abrams’s Star Wars ends up supplanting Game of Thrones as the geek thing that it’s OK for normies to like, or maybe it devolves into a fan-service sausage fest. Either way, Isaac and Driver (along with fellow younger-generation cast members John Boyega, Domhnall Gleeson, and Daisy Ridley) will have the Star Wars brand attached to their names for life.

Historically, a Star Wars role has been not unlike an Academy Award: It raises your profile no matter where you are in your career, but timing is everything. Get it when you’re already thoroughly established and it’s a fun feather in your cap; get it too soon and you may be cursed for life. Samuel L. Jackson gets to look back fondly on the time ILM made him a purple lightsaber. Jake Lloyd — well, you know. The two actors who have benefited the most from Star Wars are Harrison Ford and Natalie Portman. Ford, I would argue, is the only one of those two who was actually good in a Star Wars movie. (Portman’s performance is a joke, but a joke that endeared her to a generation of male geeks for all time. I mean, remember this?) Both stars’ momentum has more to do with their own surpluses of charisma and God-given talent, not necessarily the material they were given. Star Wars, despite the foul stench of the prequels, is generally considered a classy brand, but its shine doesn’t necessarily translate to future work, unless you plan on just riding the genre horse into the sunset, which I can’t imagine Driver or Isaac do.

I see Isaac’s Force-inflected career path looking something like Portman’s or McGregor’s: Perhaps Episode VII won’t go down as his best work, perhaps that Coen brothers cred will tarnish, but give him another decade and he’ll be back to turning out respectable indie work, maybe even grabbing that Oscar he got shut out of for Inside Llewyn Davis. Driver, on the other hand, is idiosyncratic enough to have Ford-esque potential, but his villain could also wind up as one of the stranger creations in the history of the Star Wars universe. I’m very curious to see the Sith Lord equivalent of the wad-of-paper-towels joy holler.

So what’s in it for them, besides the money? Do not underestimate the power of getting to see yourself onscreen with a laser sword. I may have my doubts about the prospects for Abrams’s Wars, but even if by some horrific accident Zack Snyder were handed the keys, if a casting agent walked up to me tomorrow and asked if I wanted to be a canon Jedi Knight, I’d say “Yes” without hesitation. My coolness would vanish in an instant, but 13-year-old me would be ecstatic. And what’s the fun of being a cool actor if you don’t occasionally get to make your 13-year-old self ecstatic?