Bunketology: Moreland Brings Some Heat to the Elite 8 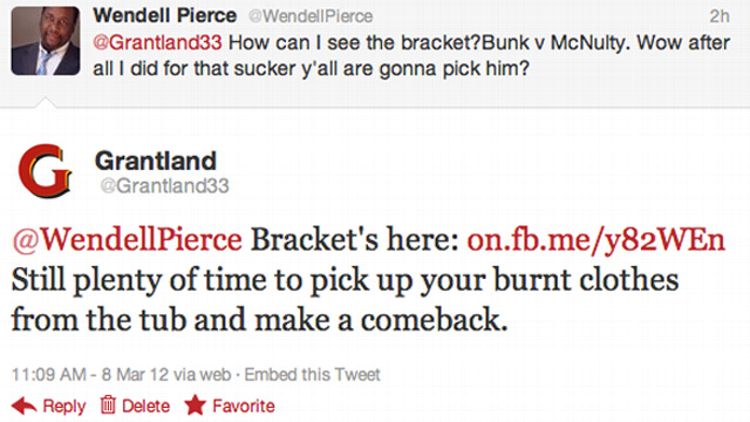 It was perhaps inevitable that the Smacketology competition would eventually draw the attention of its esteemed participants, who would then take to social media in an effort to influence the results, especially as we entered the money rounds. (That we might have sprayed @-replies at some of them like bullets at a crew slinging on the wrong corner to inspire such a response is besides the point. That’s just how The Game is played.)

Yesterday, we had Omar, Kima, and Bubs kicking around their smacketological fates, and this morning, inspired by what’s easily the most interesting matchup of the tournament so far — partner vs. partner, police vs. police — one Bunk Moreland weighed in, reminding everyone about how he’s propped up McNulty’s sorry ass all these years. With about five hours to close less than a thousand-vote spread, there’s still more than enough time to halt the upset bid before he becomes the only no. 1 seed to not advance to the Final Four. It’s going to be a tense evening at Kavanagh’s.

My Crazy Obsession: How Many Cabbage Patch Kids Are Too Many? 5,000, Right?