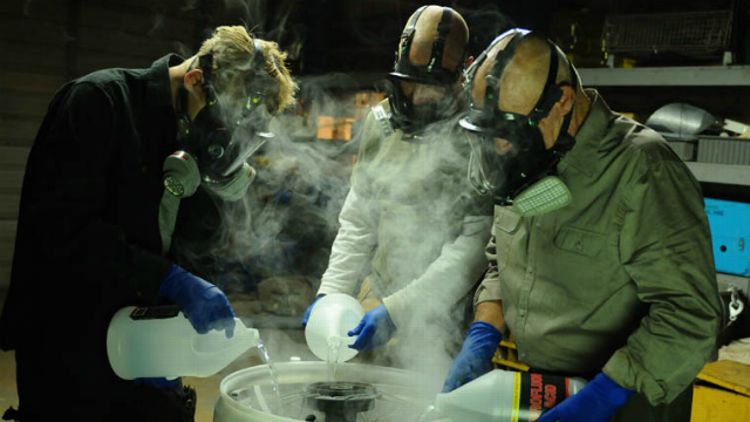 A lot can change in a year. About twelve months before the events of “Buyout,” Walt and Jesse were confronted with their first corpse. After much nausea and even more nerves, they eventually decided on a corrosive plan: use hydrofluoric acid and it will burn everything away. The stuff is clear like water, but it’ll eat through just about anything: clothes, guns, even a bathroom floor. Once you splash it out, there’s no stopping it; the acid can even dissolve a human being. With the benefit of a calendar year, we can see something else that can be all too easily devoured by it, too: the humanity of the people on the other end of the bottle.

What was most striking about the teaser to this episode was how mechanical it all seemed. Over googly, ambient suds, we watched the great train robbers behave like underpaid machinists, stripping the dirt bike apart, piece by piece, with the same crisp precision usually displayed by Vince Gilligan and his staff in the writers’ room. By the time the Yamaha was no more than dust and bones, it was time for the human skeleton to get the same treatment; while Jesse stares, red-eyed, Walt busies himself preparing another barrel. Five years of science experiments have taught even the former delinquent that every action has a reaction, but sometimes the reactions are shockingly devoid of emotion. In Walt’s pressure-cooker of a lab — and now, of a life — everything that breaks gets broken down. The Wikipedia page for hydrofluoric acid describes it as having “the potential for deep, initially painless burns and ensuing tissue death.” We’ve seen this silent poison before; it’s the default setting of Breaking Bad. It’s the tarantula in the jar — now (un)safely in the hands of terrible Todd — it’s the ricin in the wall, it’s the quirk in the DNA that makes good cells turn cancerous. Walt is always careful to wear a protective mask and gloves, but the stuff has eaten away at him relentlessly.

Previous showstopping episodes of Breaking Bad have been devoted to revealing just how far our main characters are willing to go. These displays have been thrilling (Walt four-wheel-driving the dealers about to murk Jesse), horrifying (Walt letting Jane die) or an almost unbearable combination of the two (all of last week). “Buyout” was an exceptional hour, but pitched at a slightly different volume. There’s no longer any need to show Walter White “going” anywhere. This was the week even Jesse realized his onetime teacher is now totally, utterly gone.

He wasn’t the first, of course. Skyler knew the score the very second Tio Salamanca’s rest home became a funeral parlor. It’s possible I’ve been overly harsh on her internal motivations for maintaining her silence in exchange for the safety of her kids — not to mention the show’s uncharacteristic repetition of said motivation, week after week. But last night Anna Gunn finally sold me on the deep cracks running underneath the surface of what appears to be an absolute ocean of sauvignon blanc. Even as she’s about to spill to Marie – who follows up her promise of being a lockbox with an unprompted jailbreak of private information — she discovers that she doesn’t even have control of her own secrets anymore. She’s trapped, and after the tears dry up and the hatred settles into her eyes, there’s evidence of a crazed, hopeless sort of smile playing at the corners of her mouth, the kind last seen on the face of her husband down in the crawl space, the last time anyone saw a trace of the old Walter White alive.

Icy, implacable Mike has also known for a while about the ticking time bomb in the black Heisenberg hat. But like Skyler, he has things that matter to him. And those things — the financial security of his granddaughter, the continued payments to his non-rat associates, the high cost of importing Butterscotch Krimpets from his hometown — are like chains binding him to a man he otherwise wouldn’t trust to buy a bottle of goatee conditioner. Much digital ink has been spilled praising Jonathan Banks for his ability to make a stone-faced killer somehow soulful. But I’m particularly taken with his performance in the moments when he knows there’s only one correct play, yet circumstances (he might even call them weaknesses) force him to punt. He took a gun off of Lydia when he shouldn’t have, and this week he, yet again, in the words of a certain former president, misunderestimated his no-longer-humble meth cook. There’s a ruefulness to Mike now. He’s confident he can shake a tail, but seems more and more resigned to the fact that something is going to overtake him anyway. He’s not one for leaving loose ends, but he certainly didn’t tie Walter up tight enough.

But still, Jesse had faith. Maybe he was the “Problem Dog” after all, the way he kept turning to Mr. White with those beseeching puppy eyes. Mr. White wouldn’t let a kid die, after all, right? He wouldn’t let Todd stay part of the team. He’d find a way. He’d come up with a better solution. Otherwise … well, the otherwise is too horrific to contemplate. For a time last night it seemed like Walt was going to get away with another Olivier (or least Bogart-level) acting job. When the news reports of the missing dirt-bike kid interrupt their cook, Jesse seems content to let Mr. White shut off the TV, tell stories about his own ravaged conscience and sleepless nights, and to explain how, one small, snuffed-out life aside, their independence is cause for celebration, not soul-searching. But just like that night at Hank’s, when his wine-loosened ego opened up an entire can of investigative worms, Walt just can’t help himself. He starts whistling — literally whistling! — while he works. Aaron Paul hasn’t been given any of his trademark speeches yet this season, but he’s proving to be craftier with silence. His face says everything: What kind of man is this?

But it took the permanent midnight of the White house to finally tear the blinders from Jesse’s eyes, hopefully for good. After Declan, the stubbly meth baron of the Greater Phoenix Metropolitan Area, turns down Mike’s offer of two-thirds of the methylamine (a smart businessman, he doesn’t want the supply, he also wants the demand), Jesse straps on his night vision goggles and heads over to shadowy Casa Blanca. What he finds is Scarface, but more like third-act, sin esperanza Scarface. Drowning in a blousy blue shirt, sinking deeper into a glass of whiskey and Frasier’s dad’s chair, Walt is a frightening image. But even more frightening is the typically Gilliganesque cleanliness to his argument. First he tells Jesse (and reminds us in the process) the story of Gray Matter; how he already cashed out too soon once before, and he’s not going to do it again. He is, as he puts it chillingly, “in the empire business.” After Jesse’s pleading to just go along with him and accept a $5 million buyout devolves into every argument about punk rock from 1975 to infinity, Walt delivers the master stroke and invites Jesse to stay for dinner. (Jesse did the same to Walt earlier in the season; Mr. White would have been touched by the domestic tableau had he not already viciously poisoned the cutest person there.)

The scene that follows is classic Breaking Bad, able to gin up a feeling the Germans at Madrigal might describe as “laughing to keep from clawing your own ears off.” (It sounds better in German.) Absent for much of the past few seasons, stumbling Public Jesse makes an inauspicious return, babbling weakly about Skyler’s delicious green beans, expertly selected from the deli counter at Albertson’s (“good work on your shopping, then, because these are choice”). Over increasingly menacing silences, Skyler keeps refilling her wine goblet (she should really consider investing some of her dirty money in one of these), and Jesse keeps yammering about scabby microwave lasagna, the domestic nightmare in front of him nearly as horrifying as what happened out by the train tracks. After Skyler excuses herself to finish drinking her dinner, Walt drops the hammer: “My wife is waiting for me to die. This business is all I have left now … And you want to take it away from me.” Poor Jesse. He wants out because he can’t stand any more death. But he’s not nearly fast enough: Everything is dying right in front of his eyes.

Vince Gilligan has made good on his threat. His hero is an irredeemable villain. Other than some talk of slivered almonds and some eavesdropped bits of Hank minutiae about Miracle Whip, there’s barely any humor on Breaking Bad anymore. Even Saul does his job and gets out of the way. When Mike held Walt at gunpoint overnight, acting like Ricky Williams’s agent and forcing him into a deal to accept $5 million over a dead-end life of drugs, it was stressful, but also disturbingly familiar. This is how it always is with Walter White. People assume some superiority over him, some angle. People get cocky or sloppy. And they forget what they’re dealing with. Whatever it is that Mike ties to the radiator, it’s barely human anymore. Bryan Cranston’s choices are all animalistic and feral, kicking at counters and straining against leashes. When he frees himself, it’s almost too suicidally poetic: He burns deeply into his own wrist.

Last year, this primal version of Walt – the one driven by all the years of hurt and shame and resentment – found a way to beat Gus and we were right there, cheering for him. Now it seems inevitable that he’s going to do the same to Mike, and it’s going to suck. “Everybody wins,” is how Walt – gun to his head, like Skyler’s worst nightmare not involving a corked bottle of Santa Margherita  – pitches his new plan at the close. But Heisenberg doesn’t care about other people. He only cares about himself. With a turf war looming, it’s clear he intends to expand his empire, but he’s already fallen off the map. Here be monster.