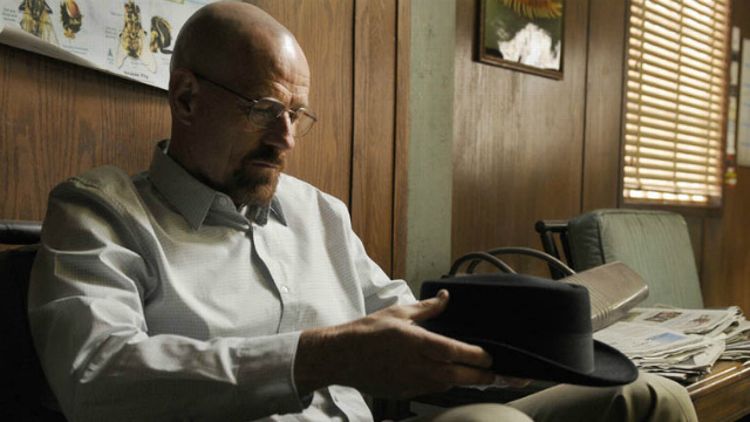 A few weeks ago, I argued that Breaking Bad was unique among its prestige brethren in that it seemed to get exponentially better from year to year. Not only better, but deeper, too; crazier, scarier, darker. The idea being that since the show is essentially telling one story — from the unlikely beginning to the inevitable, bitter end — each season builds directly on the one that came before it, showcasing Walter White’s undoing with a relentless, unparalleled focus. There are no dips in quality because the storytelling never blinks, never wavers. Vince Gilligan is telling his tale with the jacked-up concentration of a perfectionist chasing Adderalls with energy drinks, and the result is a show like no other; a roller coaster that doesn’t circle back to the start; an elevator without an “up” button.

It’s too soon to say if this fifth and final season will indeed be the best of Breaking Bad — in fact, it’s also too soon to quite know how to process it. (Will these eight “first half” episodes be constructed like an individual season with a natural resting, if definitely not restful, point? Or will it be straight free-fall separated only by a calendar year?) But halfway through the 2012 allotment, it’s safe to say this is the most radically different season of Breaking Bad to date. For the first few episodes it seemed slightly skewed because the narrative had lost not only its primary thrust — the Super Lab — but also its charismatic villain in Gus Fring. After last night’s wrenching “Fifty-One,” I realized I was looking at everything backwards. Villains are never in short supply on Breaking Bad. What’s missing — and what’s left a gaping, uncomfortable hole smack in the middle of the narrative — is the hero.

Of course, Walter White was never exactly heroic — although it does take a certain kind of superhuman valor to stick with tighty-whities so late into middle age. But he did serve as the audience’s goateed guide to the underworld lurking just below the sun-blasted suburban gloss of Albuquerque. A teacher by trade, his slow education in the dark art of getting down and dirty was ours as well. But something radical happened on that parking garage roof last season and we’re all the way through the looking glass now. Walt is no longer a cancerous Charon, rowing us all to hell. Rather, he’s the devil. And this has profoundly transformed not only the playing field of the show, but the very experience of watching it. With Gus at the top pulling the strings and tightening the screws, it was still possible to cheer for Walt to overcome his situation, even though doing so required turning either a blind or voyeuristic eye to all sorts of horrific decisions, from poisoning children to torching perfectly good cars. A week after complaining about it, Skyler’s utter mental collapse finally makes sense to me. The very sight of her husband now makes me cringe, too.

It seems strange that a show with such heavy subject matter could ever have been called “fun,” but that’s exactly where Gilligan and his talented colleagues excelled: the unlikely partnership of Mr. White and his worst student, the joy of being so good at being bad, the gregarious amorality of Saul. But for a week at least, all of that was abandoned and what remained was stripped bare, a shell of a show as horrific and bleached as a skeleton roasting in the New Mexico desert. At first I thought Gilligan and Co. were continuing to actively troll the fans with the (short-lived) return of the sturdy, unkillable Aztek, and the bordering-on-insane obsession with hot breakfasts. But really, these callbacks served a more sobering purpose: the dopey Dad with his practical SUV, the kitchen table as the cholesterol-laden but happy heart of the family home are dead and buried right alongside the recoverable half of Gus’s face. In their place is a marauding, manipulative ego monster, who buys his son’s affection (if not his respect) with gas-guzzling dickmobiles and treats his psychologically destroyed wife like some cruel combination of short-order cook and chew toy. At age 50, Walt thought he had it all and was more or less right. At 51, he thinks the same thing, but is wrong: Like the swimming pool, there’s nothing below the surface. And what we know and he doesn’t is that at 52 it’ll all be gone and he’ll be keenly, agonizingly aware of it. The only thing he’s got to look forward to is a full head of hair. (It’s also a clever tell that the bacon-number trick is a Skyler tradition; her mental state this week coupled with Walt’s sad, non-kosher calligraphy in the season premiere does not bode well for her future.)

As directed by Rian Johnson, “Fifty-One” was a horror movie told in miniature: Lydia’s silent scream, Skyler garotting her own finger with dental floss, the blood oozing from a simple shaving cut appearing dark and oxygenated like that from a slit throat. Hank is finally now a boss himself, but not even his promotion can lift the mood at Walter’s performance-art birthday party. There Skyler, dressed in Betty Crocker blue, dishes out bland Americana (she even uses a ricer for her “bad-ass whipped potatoes”!) and Walt monologues endless hokum about the small victories of family after a challenging year of loss. Skyler’s reverse-Venus into the otherworldly blue of the pool was appropriately creepy, but also effective: She wasn’t trying to drown herself so much as wake everyone else up. The scene that follows was one of the strongest in the show’s history, and certainly the most savage spousal conflict since the Sopranos’s brutal “Whitecaps.” Skyler will keep laundering the money and sleeping next to “the danger,” but she won’t let the kids be party to it. Walt’s either become a genius at gaming things out or vain enough to bluff past it all, but his precise dismantling of each one of Skyler’s hypotheticals — she’ll hurt herself and blame it on him, say — made him look sadistic, not clever. But Skyler got the last word, and it was the most violent act on Breaking Bad since Gale bit the bullet: She’s still accomplishing something, even if it’s nothing concrete. No matter what Walt does, she’ll just keep waiting until the cancer returns. But not even a tumor could possibly be more malignant than the man she married.

The decay of Walter’s home life seemed also to foreshadow the eventual downfall of Vamanos Pests as well. What Mike does may not be pretty, but it does tend to keep things clean. But with his chocolate-cake fantasy smashed, Walt has nothing left but hunger. So he and sweethearted Jesse outvote their smarter partner and give the fake-GPS-planting Lydia a second (third?) chance. Back at the now-childless Casa Blanco, the only remaining light is the orange glow of Skyler’s cigarette. Walt tries to sell her yet another line about how Jesse’s gift — again: so sweet! — signifies new beginnings and the changing of minds. She’s the one puffing away, but it’s Walt who’s blowing smoke. We know from the teaser that Walt has at least another 12 months alive, but what kind of life will it be? Jesse gave him the watch to help celebrate the passing of another year. But time isn’t Walter White’s friend. No one is. The ticking is the bomb.