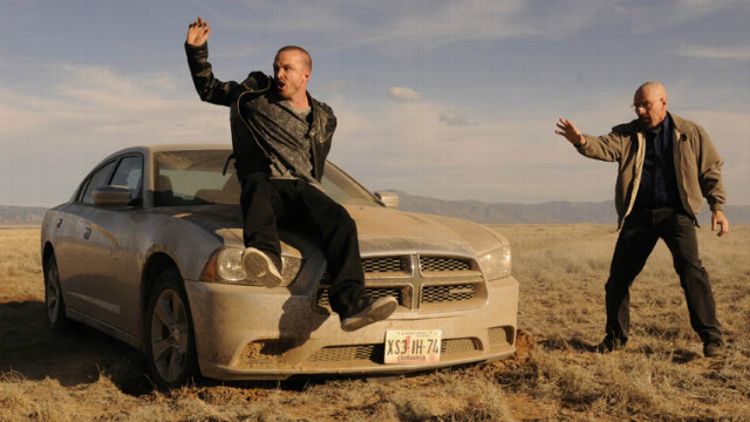 The fifth season of Breaking Bad opens with a series of images so shocking, confusing, and disorienting that it makes Season 2’s floating teddy bear acid trip seem downright conventional.

Yes, the time jump is surprising, as is Walt’s full head (and face!) of hair, his new identity as a proud New Hampshirite, and the monosyllabic return of Jim Beaver as an extralegal gun peddler. But what really boggled the mind was the idea that a member of the White family — a clan more dedicated to breakfast than the Butterworths — would leave a plate of eggs untouched. Forget what Saul declared late last season. If the man who sired the perpetually ravenous Walter Jr., a boy with syrup in his veins and an Eggo where his heart used to be, is able to ignore his free birthday bacon, it can mean only one thing: These truly are the end times.

But every ending has to begin somewhere. And while it can — and should! — be argued that Walter White’s downfall commenced the very second he traded his suburban skillet for the claustrophobic kitchen of the RV, Season 5 suggests that it was Walter’s greatest victory that started the long, rocky road to Concord. Back home after last season’s board-clearing big bang, Walter merely wants to throw out a Dumpster’s worth of devastating evidence — of both his bomb-making and his kid-poisoning proclivities — and enjoy a celebratory cocktail in peace. But all too suddenly he’s interrupted by the family he was once so desperate to protect.

Walter Jr. is so hyped up he doesn’t make a beeline for the toaster strudel, popping off instead about how the death of Gus Fring — whose larcenous hand he once shook! — will make Uncle Hank a hero, “even more so than before.” This is precisely the wrong sort of thing to say to a man who fancies himself the one who knocks, and the jealousy and resentment spreads across Bryan Cranston’s increasingly craggy face like margarine on one of his son’s beloved English muffins. Whether he knew it or not, Walt Jr.’s always played a key role in his father’s criminal enterprise. At the start, Walter wanted desperately to provide for his son, but as the seasons have progressed, it’s become clear that what’s truly important is being recognized by him, to be seen as more than just a cancer-riddled zero. That’s what last year’s self-serving speech about his own father’s malodorous hospital room was about, and the flashy, short-lived indulgence of the red sports car, too. If Junior is crediting his dad’s greatest triumph to his rock-juggling uncle, well, it’s clear that it won’t be too long before Heisenberg cooks — and kills — again.

If Walt Jr. knows too little, then Skyler knows too much. Rather than melting with gratitude and emotion at the sight of her husband’s familiar nose Band-Aid, she busies herself with Holly in the bedroom. She claims she’s “scared” of Walt, and sure, that’s partly true. But her chilliness struck me more as guilt: She’s in on this now, too, whether she likes it or not. (Her Mrs. Heisenberg–esque reaction to the desperate mewlings of the hospitalized Ted Beneke — whose freshly shaved head finally brings him in line with the rest of the strangely shorn male cast — was proof of that.) At the start of Breaking Bad, the White house, with its almost chokingly banal touches (that shag carpet, that damn dumb oversize wooden fork hanging from the kitchen wall), was Walt’s refuge from the escalating crazy of his life. There may have been dirty money in the basement and bloody detritus raining down from an air disaster above, but the home itself was safe and sacred. Now Gus is gone, but the darkness that set in during Walt’s end-of-season barricade remains. It’s no longer a repository for happy memories. It’s a tomb.

So the motivations for future illicit cookery are in place, but first Walt and Jesse have to take care of something to which showrunner Vince Gilligan is himself allergic: loose ends. The fact that Gus kept multiple cameras around to document what The Wire’s Stringer Bell would refer to as “a criminal fucking conspiracy” always seemed unwise, but our dead Chilean’s power mostly stemmed from this constant display of it. And the only man who can help the two leads with this predicament is Mike Ehrmantraut. Last seen unconscious and recovering from multiple bullet wounds, it’s a relief to encounter our favorite fixer not sleeping with the fishes but, instead, feeding the chickens. (And while I enjoy the frantic, meth-y pace of Breaking Bad as much as the next masochist, I found myself longing for a bottle episode or two spent with Mike and his kindly Mexican doctor. You know, just watching them chowing down on toritos, getting faded on sotol, and reminiscing about the crazy time their boss poisoned himself just to wipe out an entire cartel. These two dudes are the only ones in the entire universe surrounding Albuquerque who could legitimately be described as “occasionally nice.”)

The south-of-the-border collision between the frantic amateurs and the coolly professional Mike was both thrilling and strong. “What is it with you two?” he fumes before recognizing he’s going to have to clean up another giant mess. Jonathan Banks is such a steady, surly presence on the show, and the perfect foil for the two highly flammable disasters with which fate and the fallen Mr. Fring have conspired to stick him. (Could someone please make a Tumblr devoted to Jonathan Banks’s annoyed face? Finding out Gus is dead, realizing Jesse is back in league with Walt, getting his cable bill, stubbing his toe. The possibilities are endless!) What was most interesting was seeing how his attitude toward Walter himself slowly morphs throughout “Live Free or Die.” At the start, he’s desperate to put a bullet in him. By episode’s end, Mike’s content to let the sap he once punched off a bar stool have his Mac Dre moment in the backseat. Skills aside, what’s kept Mike alive a lot longer than most people in his line of work is that he’s a soldier who keeps his mouth shut. As long as the new boss keeps the checks coming — and the new boss’s be-hoodied associate keeps having the occasional Insane Clown Posse–esque breakthroughs about magnets — then he’ll be along for the ride. After all, when the inevitable final antagonists emerge, they’ll do what antagonists always do: aim for the head. The lowly right hand tends to survive another day.

As for the Ocean’s Eleven–y caper that took up most of the hour, well, it was plenty delightful — anything that involves a reference to the Dave Clark Five, a return appearance from the Bizarro Kramer junkyard manager, and Aaron Paul yelling “Yeah, bitch!” at the shattered remains of a Dell laptop isn’t liable to disappoint. It was also a nice, contained palate cleanser for the inevitable insanity to come, events neatly foreshadowed by two more instances of Walt’s skyrocketing hubris nearly undoing all the good (which is to say “bad”) cooked up by his brilliant mind: the tipped-over, abandoned truck and the discovery of some Cayman Island bank accounts that no one would ever have noticed had the family photo of the chicken brothers not been shattered in all the tumult.

But there are 15 hours remaining — seven this year, then eight next — to sort all of that out. For now, it’s a pleasure to be back in the company of such deeply unpleasant people, secure in the knowledge that Gilligan — aided and abetted by his crackerjack/crackpot DP and director, Michael Slovis, a man who has never found a household appliance he couldn’t strap a camera to — will crank his magnetizing dial a little more gradually and methodically than Walter did outside of the police station. It was a clever trick to give us a glimpse of where our lead character (you don’t expect me to use the word “hero,” do you?) is going, especially since he’s only just fully become who he is: the gravelly bully that buttonholed Saul and then wrapped his smugly forgiving arms around Skyler like a creature out of a Murnau picture, and who has a lot more in common with Scarface than with Mr. Chips. I loved Cranston’s monstrously puffed-up delivery of “Because I say so” when Mike asked him how he could be so sure his latest plan worked. All breakfast jokes aside, the teaser showed us someone who had lost his appetite. The rest of the season premiere introduced us to a man just beginning to savor it.