Breaking Bad Precap, Episode 510: Prepare Yourselves, for There Are Only Seven More Episodes Left 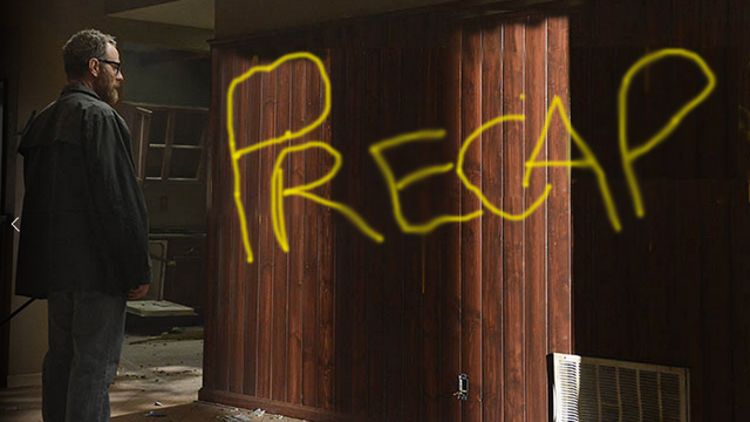 Questions to Consider While Preparing for Episode 510

Andy Greenwald: What is the average rainfall in Albuquerque?

What is the average making-it-rainfall in Albuquerque?

What is the Albuquerque city law regarding finders/keepers, especially vis-à-vis large stacks of Ben Franklins?

Can you list “tossed onto my porch like a year’s worth of Parade magazines” on your income tax form when trying to explain a recent speedboat purchase?

Who really needs a speedboat in New Mexico, anyway?

Is a pie-eating contest really the best use of Starfleet man hours?

What sort of spec scripts has Badger written for Serenity and Torchwood?

And do they involve blueberries?

And while we’re looking for him, isn’t it weird that Jesse Plemons is the kid from the first-season cast of Friday Night Lights who wound up with the most successful career?

I mean, you’d have put at least some money on Scott Porter and Gaius Charles, right?

Look, Hart of Dixie and Grey’s Anatomy are solid paychecks, but Plemons booked Breaking Bad and a P.T. Anderson movie! And all while dressing like a hobo wearing a Lumineers costume! Am I the only one who finds this impressive?

Did Lydia lose her deductible on the rental car?

Do you think she owns any sensible flats?

Is her trip between Houston and Albuquerque TV’s new “Scranton-to-Manhattan” on The Office, which is to say a not-insignificant drive constantly written off as a casual commute?

Or is the remote control car just a metaphor for the fragility of things we try to control from a distance?

Or was it just a cute callback to the time Marie ran over the kid’s first R/C car a few seasons back?

Speaking of Marie, does anyone remember that her maiden name is Lambert? Meaning Skyler’s maiden name is also Lambert? And that New Hampshire Walt is now going by “Mr. Lambert”?

Are Walt and Hank still standing in the garage, staring at each other?

I mean, realistically, who blinks first?

Because, you have to imagine, even with the whole “I just discovered my milquetoast brother-in-law is a drug-cooking, snitch-murdering, nursing-home-bombing gorgon from the eighth circle of hell” thing, eventually someone’s gonna start giggling, just to break the tension, right?

And I can’t really imagine Walt giggling, can you?

I didn’t think so.

Let’s Run Back Last Week’s Hank vs. Walt Confrontation, Because It Will Be Fun for Your Heart to Fall Into Your Stomach Again

It’s Nice to Be Right, You Guys

Emily Yoshida: Given that I just spent about 15 minutes arguing against the entire practice of speculating about Breaking Bad in the most recent Girls in Hoodies podcast, here are some other things on my mind on this, the seventh to the last of our Badmas Eve-Eves:

John Lopez: Last Sunday, after bingeing on preseason Breaking Bad coverage like a tweaker at a Sudafed plant, I had automatically embraced the wisdom of the crowds: Walter White has become 100 percent monster. He must die. He’s going to die. The entire series will be a failure if he doesn’t die. What’s a modern-day morality play without the morality? Then I caught Julie Bowen’s amphetamine-fueled fan-rage on Talking Bad. Once I reassured myself Julie wasn’t going to eat Vince Gilligan’s face, her giddy frenzy made me realize, “Wait a second; this is America. Land of Michael Corleone, the atom bomb, and extraordinary rendition.” IF — and yes, I know it’s a big if — IF Walter White somehow got away with his murderous, meth-empire psycho-spree, would we really be all that upset?

Listen, it’s beautiful and refreshing that Vince Gilligan is so clearly committed to TV as a moral force. And obviously, that will lead to many “Philosophy of Breaking Bad” courses on liberal-arts syllabi nationwide. But who among us doesn’t have that dark desire to see him get away with it? Don’t the series’s most thrilling heights usually come when Walter’s at his worst? Say, when he two-faced Mike with crocodile tears for a cell phone just so he could send Jesse Gale-hunting to the strains of a Starbucks world music CD? Sure, Hank’s eloquent fists drove home the point that Walter endangered a rest home full of innocent seniors with his Wile E. Coyote–in-a-drug-war antics. But what wheelchair-bound granny couldn’t at least smile when Tio Salamanca tolled the bell for Gus Fring? And yes, Hank’s justified rage last week reassured me I’m still a good person; but when Walter hissed that perfect serpent’s threat — tread lightly — I got a little turned on.

Here’s the thing: Breaking Bad has my mother, a woman so sweet she apologizes to traffic cops when they pull her over, gleefully debating which fast-food chains would be the best cover for a nationwide drug distribution network. So, if it makes you feel better, tell yourself Walter White needs to die for our sins. But don’t deny that you’d grin if he somehow Butch-and-Sundanced it out of the moral depths with that M16. After all, what’s more American than riding off into the Mexican sunset with a trunk full of guns, blood money, and a stroller?

Endgame Theory of the Week: The Sin-Eater

Mark Lisanti: Here’s the (possibly Reddit-originated) theory put up on the Straight Dope message boards, then circulated widely by BuzzFeed, about Walt’s strange propensity for taking on the attributes of his victims:

I read this somewhere, maybe Reddit, and it’s quite an intriguing theory.

In Breaking Bad, Walt has a habit of taking on some little traits of the people he has killed.

When Walt killed Crazy 8, he started cutting off the crusts of his sandwiches — just as Crazy 8 had done.

Gus drives a Volvo. After Walt kills Gus, at the beginning of Season 5 (at the Denny’s), Walt is driving a Volvo (w/ NH plates).

When Mike and Walt meet at a bar in an earlier season, Walt orders his drink neat while Mike has his on the rocks. After Mike is killed, and Hank offers Walt a drink in his office — he asks for it on the rocks.

At that same scene at Denny’s, Walt arranges his bacon into his new age. Someone else used to do that. On top of that, he’s using Skyler’s maiden name on his fake ID.

Based on his history of picking up traits from his victims — I believe Walt is going to murder Skyler before the series is over, and it probably had already happened before he showed up at the Denny’s in the Season 5 cold open.

BuzzFeed also adds two more elements from last week’s episode: Walt folds the towel in front of the toilet when he gets sick, just like Gus did when he was vomiting out poison; flash-forward Walt is wearing Jesse’s jacket, foreshadowing (and also reverse-shadowing, because that’s what happens when you shred the narrative continuum) that he must have killed Jesse as well.

Fun/evil con the detail-loony Vince Gilligan is playing with superfans to turn their obsession against them, or incredibly subtle hints of the endgame to come? YOU MAKE THE CALL.

Oh, I should make the call?

OK, then: Walt does not kill Skyler. There are things that even Heisenberg won’t do, and among them is killing the people he was ostensibly trying to help when he started down his dark path. Murdering his own family members is too cartoonishly evil a resolution for a show that has never let us off the hook by becoming a cartoon.

And also: That is not to say that Skyler and/or Walt Jr. don’t die. OK!

But: Walt kills Jesse. Walt has to kill Jesse, doesn’t he? There’s nothing else he could do on his unstoppable quest for self-destruction that would have as devastating an impact. Not if he killed Skyler, not if he killed Walt Jr., not if he killed Hank. If (when!) Walt kills Jesse, there will be none of the spiritual fist-pumping of watching a bomb-sheared Gus vanquished, of watching an entire cartel drop dead poolside; there will be only the wave of nausea you feel when the queasy inevitability of a long-dreaded terror has finally come to pass. Vince Gilligan is going to drive an Aztec right through your living room in the next seven weeks. All we can do is hope the crime-scene cleaners know how to get all-terrain radial skid marks out of our collective sofa.

Or: Maybe Jesse kills Walt! That would also be pretty bad. Not nearly as bad as the other way around, because Walt has more than earned a good murdering, but still. Bitch. Bitch?

And: This isn’t fun anymore. I need to go lie down. Hey, Vince — please don’t kill anybody until I wake up.

Jonah Keri: 1. Walt meets with Jesse again to tell him that Hank and the DEA are on to them. Walt tries to win Jesse’s favor (again), and Jesse replies with vacant, disingenuous, “Whatever you say, Mr. White” replies.

2. Hank realizes he can nail Walt the same way any cop goes after any kingpin: by pursuing those lower in the pyramid. With Gus, Mike, and all of Mike’s guys all dead, the only logical target he knows is Jesse. Cooperate or I’ll make your life a living hell, Hank tells Jesse, insinuating not only jail for life but also some more of the extracurricular punishment he previously administered to Jesse’s face.

3. Jesse agonizes over the decision, then finally decides he’s tired of living a lie, and that he can’t deal with his guilty conscience anymore. Jesse meets with Hank and tells him everything. The episode ends with a vivid recounting and flashback to Jesse murdering Gale, followed by Hank flashing a wry smile.

4. Showing scenes for next week, we see Badger, Skinny Pete, and the ghost of Gene Roddenberry pitching a Star Trek reboot to AMC execs. The two sides have trouble coming to terms because the AMC folks vastly prefer boysenberries.

One Last Thought Before We Go

We’re all probably going to be wrong, about everything.

Because Vince Gilligan’s smarter than us.

The Right Reasons Podcast: The Challenge and Below Deck