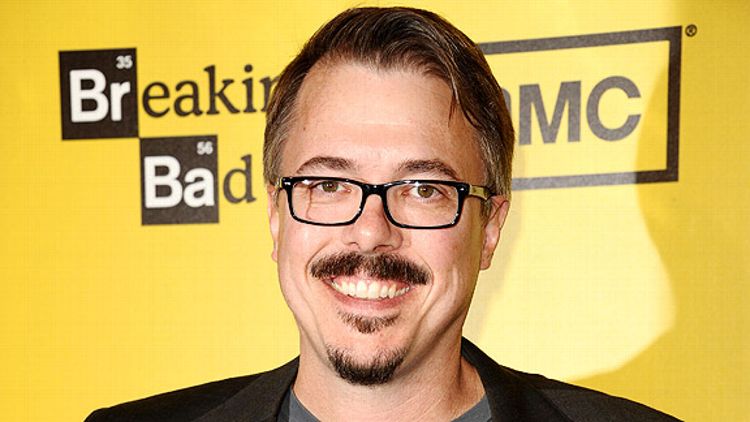 Breaking Bad finally returned last night, picking up right where it left off 13 (!) months ago, with Jesse aiming a gun at poor Gale’s head and, despite some perceived ambiguity regarding the season finale’s final camera angle, most assuredly not missing. On Friday, we spoke with series mastermind Vince Gilligan, who discussed the season premiere’s bloody events in vivid detail, so if you didn’t watch the show and still intend to, by God, please stop reading. We’re serious about this: “Spoiler alert” doesn’t even begin to do it justice.

OK, first off: Holy shit. Although that isn’t really a question. But this episode really puts the lie to the notion that a season premiere is meant to gently ease people back into a show after a long layoff. The Sopranos would have probably let Jesse get away and spend a couple weeks teasing a potential confrontation with Gus. You gave it about 24 minutes.
The pace is always something that my writers and I spend a lot of time talking about. Most shows are designed to be open-ended and theoretically could go on forever, but this is designed to take a guy from his beginning point to his end point and transform him from a good guy into a bad guy. You’re on a finite continuum when you’re telling a story like that, and even as the writer of the show, you can’t always be certain at what point on that continuum you happen to be. We kind of blindly feel our way through it. A good rule of thumb seems to me is to have a lot of fun, interesting plot twists and have a lot of story to tell but tell it as slowly as you can, so you don’t shoot your wad too soon. I can’t say that all the episodes will move quite this fast — some will be ripping along, others slow down and take a moment to let the audience catch their breath.

The centerpiece of the episode, obviously, is the scene in the lab when Gus pays a visit. Did you always intend for that to be this long, excruciatingly quiet thing, or was that just how Giancarlo Esposito played it? He went 10 minutes without saying a word or changing his expression.
We always had the idea that for the third act of the episode, we would make a real meal of that scene when Gus faces off with Walt for the first time after everything that happened at the end of season three, to just milk the hell out of that thing and have the audience on the edge of their seats. Our episodes are generally 50 pages long — about one page per minute — and when I wrote this one, it was only 43 pages long, which concerned me. There’s a difference between drawing something out and padding it to the point of being boring, of stretching to the breaking point but not actually breaking. On the page, it’s not just, “Gus comes downstairs and undresses.” You try to describe what everybody’s thinking, what everybody’s feeling. You try to make it novelistic. There’s a little novelist in all of us television writers.

So you were able to trust that Esposito would be able to make something like calmly taking off his jacket and glasses sufficiently terrifying.
It’s amazing. You’d be surprised how little I talked to Giancarlo about how he played that part. Certainly the director, Adam Bernstein, talked with him, but this is a man with amazing instincts. There are very few actors who can go toe-to-toe with Bryan Cranston, but Giancarlo Esposito is a guy who can do that. I’d known that for years, before I even met him, watching him in so many wonderful movies, and seeing the fine range he possesses and the skill he possesses. It’s interesting — he’s such an effusive personality in real life. He’s such a wonderful guy, he’s got a smile for everyone, and he is so the opposite of Gus Fring. But I had ample reason to be confident.

At first viewing, slashing Victor’s throat seems strictly like Gus making a brutal point to Jesse and Walt, but Victor wasn’t totally undeserving of punishment.
The audience has every bit as valid an opinion as I do, but for what it’s worth, I think what happened was that Victor made two mistakes: He let himself get seen at the house, and we can tell from the early going that that seems to worry Mike. The other thing is, it’s a bit of an affront to Gus that Victor added insult to injury by thinking he could cook Walt’s formula. This is a guy, we learned from the teaser, who wants the best. He doesn’t want just some well-intentioned schmo who’s not a chemist cooking the formula.

There’s that maxim that if you show a gun in the first act, you’d better fire it by the third. You double down with that idea, not only opening the episode with a close-up of the box cutter, but by naming the episode “Box Cutter.”
It just sounded like a cool title, but in hindsight, perhaps it’s that I had some concern that it was a long build within the episode and it did not start off with a bang. Perhaps I was thinking on some level, “We’d better let the audience know that there’s something at the end of this.”

The episode ends with Walt and Jesse wearing, without explanation, matching Kenny Rogers T-shirts.
I really mean it when I say that I love for the audience to come up with their own answers. If we leave out a step — how we got from point A to point C if we leave out step B — the audience’s take on it is every bit as valid as mine. Having said that, one man’s opinion, this opinion being mine, what happened was that these guys get splattered with blood when Victor’s throat is cut. As such, they can’t go out into the world with human blood all over them. That would be very bad. That’s something Mike would not want to see happen either, as much as he hates those two guys right now, as angry as he is for their hand they had in getting his friend Victor killed.

So Mike gets them matching Kenny Rogers T-shirts to mess with them.
I say yes. I think what happened was, he went down to Target or Wal-Mart or whatever and he grabbed the first things he saw, and he grabbed two identical shirts and two pairs of white jeans and he got the hell out of there, and he threw them at them, and he said, “Get the fuck out of here.”

Even though Walt is pretty passionate in his defense of Jesse, that warmth doesn’t seem particularly reciprocal. It’s always jarring, after all this, to hear Jesse call him “Mr. White.”
This poor fella is a damaged soul at this point. He is a murderer now, and yet he’s still not. He did what he did to save his friend and to save himself. He didn’t want to do it, and he was forced into it. It’s a terrible thing that is going to have repercussions for a long time to come.

You said earlier that you already know what the end point is for Walt. At what point do you feel the character passed the point where this was just about providing for his family and became someone who wasn’t going to come out of this, who wasn’t going to just be able to go back to teaching high school chemistry?
I’ve never been asked that before. And again, I know it sounds like I’m being falsely modest in saying it’s just my opinion. I don’t think it’s any less valid, but I don’t know that it’s any more valid. All that to say: Everyone speaks of the moment in Season 2, when Walt watched Jane, Jesse’s girlfriend, die from a heroin overdose. I think Walt reached the point of no return was actually before that, as early as Season 1, and it might have been the moment in which he was offered financial salvation. He was offered some sort of deus ex machina salvation in the form of his former partner coming to him and saying, “Listen, Walt, I’ve heard about your situation, and I’d love to give you a job, and I’d love to pay your bills, and I’d love to give you a free hand here.” And Walt, out of pride, would rather cook crystal meth than take the help.

I was about as proud of that moment as I was of any we’ve had since, and I’ll tell you why: My first inclination for this show was that this was a good man — fundamentally good — who was doing a really stupid thing, cooking crystal meth, and was ignorant of how terrible this world was and would quickly be in over his head, and quickly forces beyond his control would make him continue cooking. Perhaps he’d be held in some sort of bondage by some kingpin and made to cook meth. It occurred to us early on, “You know what? We don’t want to see that. No one wants to see that.” They want to see this guy, right or wrong, have the will to go forward in this thing. That’s a much more interesting character than a character who is forced simply by dire straits.

It’s kind of like he’s been striving to not feel as emasculated as he was working in that car wash, but every turn towards sticking up for himself digs him into an even deeper, more helpless hole.
You’re right. It’s one step forward, two steps back. Walt’s so self-deluded for the reasons that he does the things that he does. I think he absolutely loves his family. He wants the best for them, but there’s also the question of what does he want and how does this make him happy or satisfy him on some level? This feeling of power and potency that has eluded him for years now. That’s a good angle.