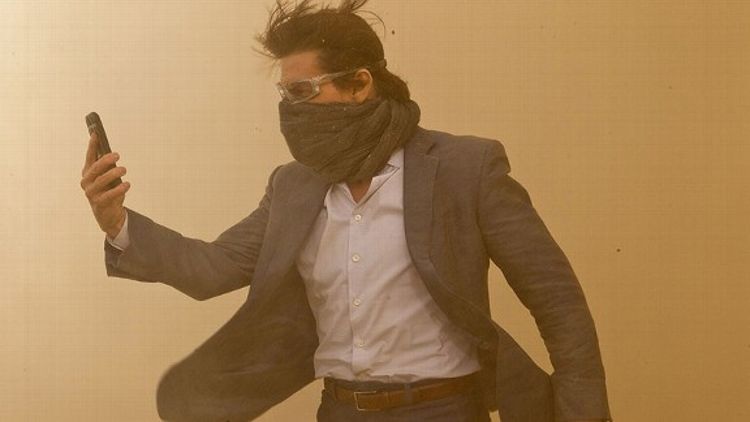 For a while there, Mission Impossible: Ghost Protocol looked like an embattled production. Its biggest issue was its star: with his latter-day appeal a question mark, the forces-that-be seemed to be pushing attention away from Tom Cruise, and the franchise’s past, by hiring high-profile co-operatives like Jeremy Renner and Paula Patton, and adding — and heavily promoting — that elegant subtitle.

Now, though, everything’s just peachy! The reviews are overwhelmingly positive, with Rotten Tomatoes at a whopping 95%. Also: this thing is making ducats. After an early international premiere landed it a insane $68 million in just five days, this weekend’s limited US release continues to augur good things. In something of an experiment, Paramount opened MI4 in IMAX-only theaters, meaning only 425 locations. It killed, pulling in $13 million and a sickeningly devastating per-screen average. Not hurting the cause was the presence of The Dark Knight Rises trailer, playing ahead of MI4 in 40 of those 425 theaters.

And why did Warner Bros. agree to attach its impending blockbuster’s trailer to a rival studio’s production, rather than its own Sherlock Holmes: Game of Shadows, which also opened this weekend? Because Paramount had stockpiled the IMAX screens for MI4, forcing the WB’s hand. That wouldn’t have been a particularly big deal if it wasn’t for the fact that Sherlock Holmes, in it second go-around with asskicking Robert Downey Jr. in the lead, stumbled. The first neo-Holmes pulled in $62.3 million in its opening weekend; this one, a relatively disappointing $40 million. Meaning: somewhere, as we speak, RDJ is shaking an angry fist at the fact that he didn’t get a ride on the Dark Knight Rises gravy train.

Holmes pull was good enough for first place, though, adding insult to injury for Alvin And The Chipmunks: Chipwrecked. The insult: Making only $23.5 million this weekend, out-and-out weak sauce compared to Alvin and the Chipmunks 2’s $48.8 million. The injury: Being called Alvin and the Chipmunks: Chipwrecked. And it wasn’t only uninspired sequels getting the shaft. Jason Reitman’s Young Adult, which did well in its limited release, expanded wider without dramatically boosting its haul. It landed at seventh place, with $3.7 million.

All these disappointing box office numbers getting you down? Let’s focus on the positive in the negative! Meaning: Let’s all laugh at New Year’s Eve! The execrable Josh Duhamel and Co. production continues to crash and burn, and, with $7 million this weekend, is down 43% from last week’s already crappy numbers.