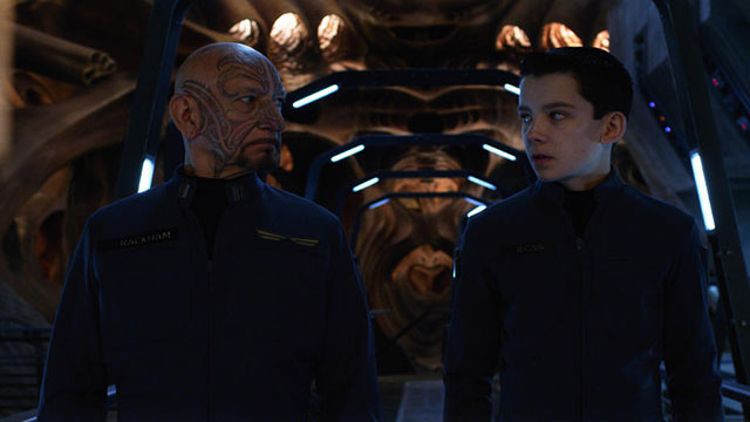 Not only is Catching Fire mere weeks away and on track to just crush the box office, but its young-adult source material also features the term “game(s)” and, unlike Orson Scott Card’s novel, it originated on this side of the year 2000. So while a so-so opening weekend might not seem like the beginning of the end for young Ender, it … probably is. If Grumpy Harrison Ford still pays attention to things like ticket sales, how moody do you think he is this morning? One- or two-syllable monotone responses to everyone until at least lunchtime? My money’s on one-syllables.

After taking Gravity’s no. 1 spot last week with $32 million, Bad Grandpa had the best box office hold for any Jackass movie. Congrats again, Johnny Knoxville. Treat yourself to a special weekend where you don’t dress up in oldface, no alligators bite you, and you’re flung from zero shopping carts.

Didn’t expect this one to crack the top five, but I’m too far from the demo that needs to see three big, old last names (Douglas, De Niro, Freeman) and one dude who isn’t as much a one-namer as he is an oldster (Kline) to take an accurate temperature on the Last Vegas hype rolling through $16.3 million worth of America. Box Office Mojo, however, does inform me that “it’s only a bit better than Robert De Niro’s The Family ($14 million), and is also way off from Morgan Freeman’s other movies this year (all of which opened above $29 million).”

Turkey versions of Owen Wilson, Amy Poehler, and Woody Harrelson came together to knock Cloudy With a Chance of Meatballs 2 off the top shelf, but they didn’t make much of a wave doing it. Let’s see how this one does through the rest of the month.

I’ll advocate for Gravity one final time before it probably exits the top five forever: Go see Gravity. It’s like being on a ride in space, right down to the space-tears. Don’t get bashful just because you’re a few weeks late — Thanksgiving is coming, and what’s that if not the time when we come together to belatedly discuss Gravity?

Marvel (which is owned by Disney, just like Grantland) kept its open-outside-America-first policy going for the Thor sequel, and more than $100 million is nothing to laugh at. While it’s almost half Iron Man 3’s $195 million overseas opening, it’s better than Iron Man 2’s $100 million. Oh, and it hasn’t even opened in China yet.

A $29,000 per-theater average isn’t bad for a movie about AIDS featuring a brutally gaunt Matthew McConaughey and Jared Leto in drag. Also: 94 percent on Rotten Tomatoes so far.