Bow Down to the Queen: Notes on Beyoncé’s Halftime Show 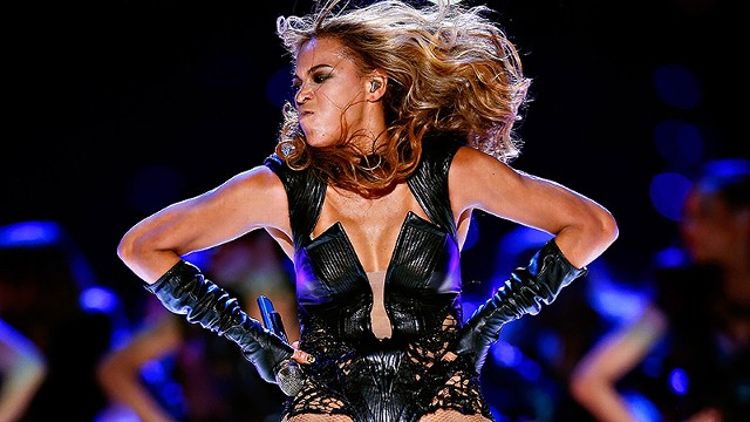 It’s possible we’ve been living with amateurism and aspiration for so long that when an artist achieves honest-to-God perfection we catch the Holy Ghost. Beyoncé did that to America last night. She took live spectacle to the highest power, maybe even further given the time we as a nation spend dissecting mediocrity and rubbernecking at crap (“Was that any good?” “How bad was that?”). Beyoncé’s Super Bowl halftime show is a necessary corrective to televised talent competitions. Every once in a while we need a reminder of what these shows, with their platitudinous, literal-minded performers, are hoping to produce: an evening of flawless entertainment.

When Beyoncé rose up from the stage on a platform, with one hand on her hip, and sang a line from “Love on Top,” she wanted us to know that she had flawlessness in mind. Well, she wanted us to know that before she arrived, when she allowed her set to begin with a recorded convocation from Vince Lombardi: “Excellence must be pursued — it must be wooed with all of one’s might and every bit of effort that we have.” It was a symbolic mission statement, the equivalent of lighting the Olympic torch, and a touching identification of what she does with what all committed athletes aspire to do. She might not care about the NFL, but she understands the professionalism of professional sport.

Last year, Madonna’s halftime circus took delight in calling out the ironies of football and masculinity. She turned the history of sport into oversexed kitsch. Madonna’s power is subversion. Beyoncé’s power is power — power singing, power walking, power posing, power body, power hair, the industrial power required to power that hair, power facial expressions, power jiggling, power power. Beyoncé gave it all to us last night. But not in a way that left her sweaty or breathless. She rolled around on the floor, popped back up, danced with herself, danced that jiggle-dance in a line of powerful-looking women dressed like her in heels, stockings, and strategically arranged leather.

The power of this show was in the strength not of its femininity (there was nothing simply feminine about it) but in the power of its womanliness. She performs with an all-female band to whom she kept calling your attention. Her backup singers were a quartet of buxomness. She became famous as part of a girl group, and when she carved time out of 12 minutes to reunite Destiny’s Child, you understood why she didn’t bother doing a song like “Run the World (Girls).” She was already personifying it. When Kelly Rowland and Michelle Williams popped up through the floor, the volume at the stadium grew. So did the level of ferociousness, particularly from Rowland.

Talent competitions have turned us judgmental. The nichefication of music has created neighborhoods we’re rarely required to leave. Beyoncé is one of the few stars with the power to take tweens, women, hipsters, queens, and dudes — of any age, race, nationality, political persuasion, and income bracket — and unite them all in one place. And that place is often at her feet. One amazing thing about last night is how often she acknowledged and returned the love. A lot of her performance was spent crouched down, singing into the crowds gathered around the stage, which featured flaming lights arranged as two androgynous faces in symmetrical profile. It was halfway toward the best album cover Earth, Wind & Fire never made.

It wasn’t a lowering of self so much as an equalization. Beyoncé enjoys her power, as a civilian (she purchased an entire floor of a New York hospital to have one baby) and as a performer. She never sounded better than she did last night. Some of that might be a matter of self-defense. For two weeks, she’s had to deal with the fallout of the revelation that she lip-synched the national anthem at Barack Obama’s inauguration. Her explanation was having a lack of sufficient rehearsal time. But, really, she had nothing to explain. It’s not as though she couldn’t sing the national anthem. She, in fact, did sing it — just not into the microphone on that particular Monday. Lip-synching has become the performance-enhancing drug hassle of the entertainment industry, and Beyoncé seemed determined to put a stake in the heart of the debate by blasting and growling and ad-libbing. Her most obvious live-concert forebear is Tina Turner. The shakes and shimmies and spinning, the high-heeled half-steps, the big, hungry, sexed-up faces? Totally Tina. And she knows. Her first spoken word paraphrased Turner’s biggest movie role: “Superdome!” It’s a sign of how firmly enshrined within the pop-megastar firmament Beyoncé is that when she ended the set with a twangy “thank y’all,” I found myself once again surprised that fame hadn’t anglicized her diction as it has Turner’s and Madonna’s.

Having Beyoncé perform the halftime show finally removed the fear of the present from that gig. It’s true that a mini–Destiny’s Child reunion is a turning back of the clock, but not a desperate and not an FCC-mandated one, either. This is what you get when you forgo nostalgia. It’s a show Janet Jackson could have done in 1990 and Madonna in 1993 (Madonna in 2012 is actually “Madonna”). The excitement of having Beyoncé perform was that it’s the most “now” the show has been without culminating in the train wrecks of what’s hot, like 2001’s collision of the contemporary and the ancient. (‘N Sync, Britney Spears, Mary J. Blige, and Aerosmith: That actually happened.) Beyoncé did work without the threat of flop sweat. When she and Rowland and Williams did “Single Ladies” together, it was a kind of reinterpretation of that anthem as girl-group doo-wop. It was also her one big stab at jokiness. “Put a ring on it” applies to the Super Bowl as much as it does to the sport of getting engaged.

The bar I was in is not a Beyoncé bar. It’s a Bad Religion, Bleeding Rainbow, Tiger Army type of bar. Occasionally, you’ll hear Run-D.M.C. or Billy Idol or Kurtis Blow. At halftime, when the lights ceremoniously dimmed in the Superdome, they also dimmed in the bar. You could hear a hairpin drop. Like very good politicians, great pop stars bring us together without irony or apology. They’re all the pleasure, none of the guilt. That’s Madonna. That’s Michael Jackson. That’s Prince, whose sublime 2007 halftime show Beyoncé came this close to eclipsing.

When Beyoncé released I Am Sasha Fierce a few years ago, no one seemed to understand the difference between the star and her alter ego. David Bowie had Ziggy Stardust. Mariah Carey had Mimi. But “Beyoncé” already seemed like an alternate self. So Sasha Fierce was just pseudonymous superfluity. Last night underscored that: When is Beyoncé not fierce?

When the Superdome went dark not long after her show, the lack of electricity shouldn’t have been a mystery. Beyoncé owns power. When she left, she took the stadium’s, too.