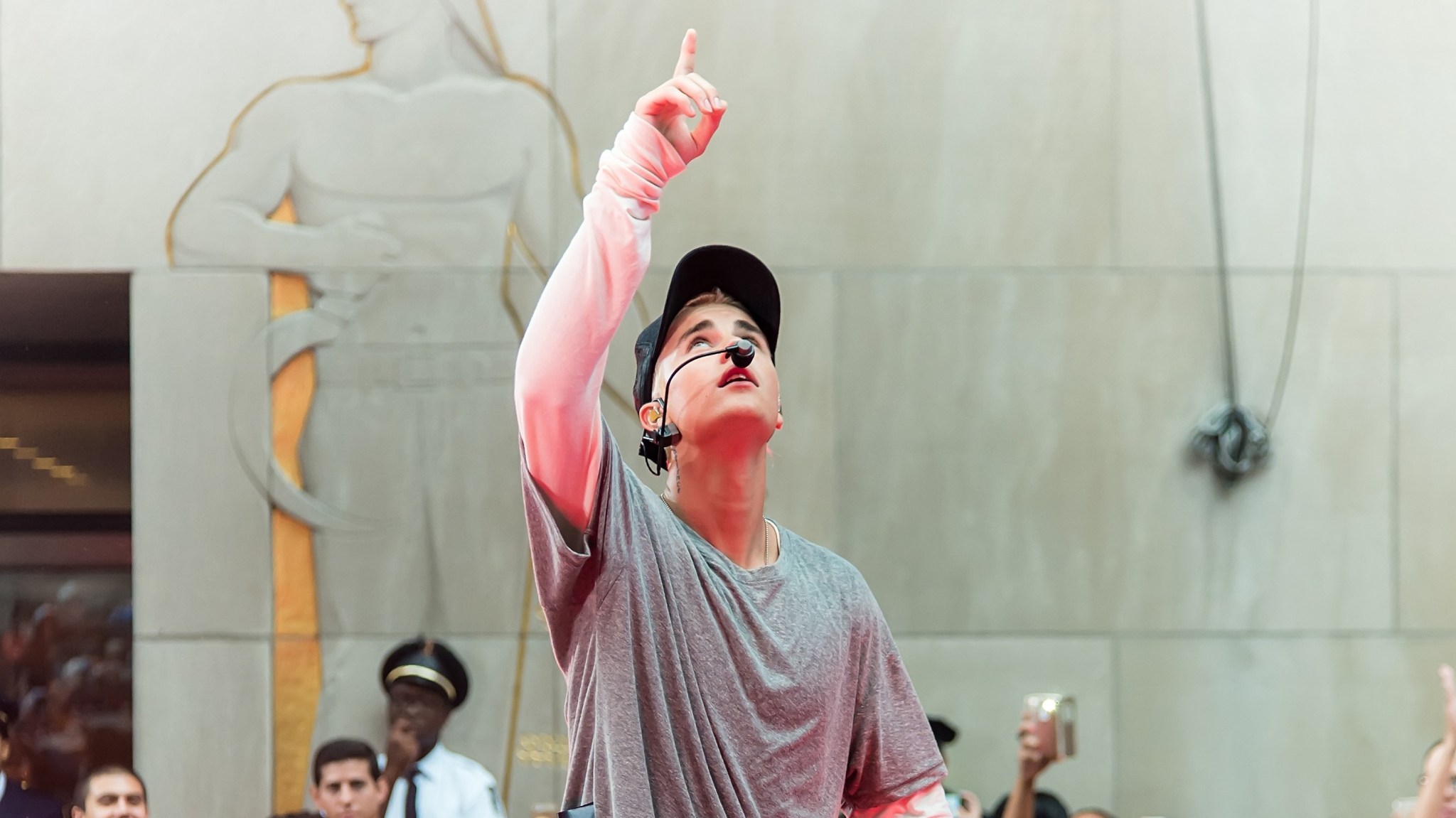 Justin Bieber has been remade as a pop star and a human being. According to him, that’s thanks to the power of God. He’s on his “New Morning” grind, and he’s going to spread the good word that if Jesus can help Justin Bieber get back on track, surely he can help just about anyone. Bieber says he owes much of his comeback to Australian-originated Hillsong church. Now also popular in the U.S., with a number of outposts in California, Hillsong aims to make Christianity cool by an association with stars like Bieber and Selena Gomez. Their followers in Los Angeles look like any group of aughts Silver Lake hipsters — big floppy hats for the women and V-neck shirts for the men.

Hillsong is one of a number of hipster churches that evoke the imagery of outdoor music festivals like Coachella — a flyer for an Easter service downtown depicted an image of palm trees against a clear blue sky that also evokes the Holy Land. Pastor Carl Lentz, the charismatic pop pastor of Hillsong, mentors Bieber personally. A senior pastor at Hillsong said of Bieber, “No doubt he’d probably be the first to say he lost his way in a whole lot of ways and, yeah, I think he realizes that it’s now-or-never time to try to build better foundations into his life.”

Much of this reversal aims to get you to forget his first attempts at moving into public manhood — when he crashed a car, peed into a mop bucket (on camera), and generally acted like a snotty brat with millions of dollars and a persecution complex. But Bieber, ever confident, had no interest in becoming one of those teen idols who is washed up before they’re old enough to rent a car. He kept his eyes firmly on the prize — a Justin Timberlake–like crossover from teen pop into adult R&B, abetted in Bieb’s case by EDM. If you’ve seen either of the Bieber documentaries you know that the baby Bieb really believes himself to be blessed with a God-given talent that he was put on earth to share. The thing is, maybe he’s not wrong.

Whether or not you believe the Lord has changed Bieber, this story line has certainly been a good move for his career. His new album cycle is his most successful yet, bringing Bieber new fans in new demographics. And he’s not the only one moved by the spirit. His ex-girlfriend Selena Gomez, Bieber’s longest and most public relationship to date, is releasing a new album titled Revival. Cleanliness is close to godliness, and Bieb is hoping that invoking a higher power will help him clean up his bad-boy image. And so far, God is down.

Bieber’s new song “What Do You Mean?” is his first no. 1 on the Billboard charts, and at 21 he’s now the youngest male artist in Billboard history to debut a song in the top spot. He hasn’t charted this high since 2012’s “Boyfriend” made it to no. 2. With this new record, Bieber is announcing himself as more than a mere teen pop nuisance. He’s here to stay.

How did we get to this point? Ask Diplo and Skrillex, who helped Bieb mount his comeback this summer with “Where Are Ü Now.”1 The song showed that Bieber, like Justin Timberlake (and the Madonna of yore), is smart inasmuch as he’s savvy about picking hot producers and contributing his vocals as merely one more element on the track. Diplo can make a hit out of just about anything — Major Lazer and DJ Snake’s “Lean On” became one of the summer’s biggest slams after being rejected by Rihanna (whose R8 release date remains unscheduled) and instead utilizing the vocals of Danish singer MØ.2

And so Bieber 3.0 has embarked on a tour of forgiveness, faux-humility, and, most importantly, songs people like. Without the last element, none of this would have worked. Justin’s two singles from this new era have an experimental flair that even the most hardheaded pop fan cannot deny. “What Do You Mean” is produced by Mason “MdL” Levy with a co-credit from Bieber, and features bamboo flutes and a ticking metronome. It’s a refreshingly light, synthy confection that recalls Asian American ’80s progressive jazz ensemble Hiroshima’s “One Wish” and British musician Paul Hardcastle’s classic “Rain Forest.” To go adult, Bieber has gone slightly adult contemporary, zigging into a new realm that helps his sound outpace both his own past and his current peers.

While neither Bieber hit is explicitly religious, the subtext is there — much like on Katy Perry’s album Prism, in which every song addressed to an unnamed lover could easily also be read as an appeal to God. The pleading questions of both titles have a decidedly Christian feel — no coincidence, as Bieber wants us to believe he’s been saved from himself and his teen demons by the power of faith. Gone is the teenage mustache and smug smirk. In their place: a sometimes blond floppy hairstyle and a permanently furrowed brow. Whoever has been media training Bieber since his summer of screwing up nonstop has wisely advised him to project an altar boy image and generally let the music speak for itself. Not that Justin has stopped talking — he’s just being a lot more careful about what he says.

He’s maybe overdoing it a little bit — posting Instagrams with Bible verses and giving quotes about how his relationship with God is “the coolest thing.” Crying crocodile tears in an angelic white light at the VMAs after performing “What Do You Mean?” for the first time in public was a little transparent and over-the-top. But it’s less off-putting to potential new fans than when he was drinking lean and squiring a different girl on his arm to every party. That iteration of Bieber was trying so hard to seem grown and sexy it just highlighted how immature and boyish he still was.

New Bieber wants you to think he doesn’t believe his success is preordained, but occasionally the smirk slips out that makes it clear he’s not a totally different person. Yesterday, Bieber was cursed with a hot mic that captured him yelling at a Today Show cameraman for not shooting his dance moves the way he liked. So the question of whether Bieber would slip up with his new choir boy image has already been answered: Yes, almost immediately. The good news for Bieber is that people might not even care that he’s still a douche, so enamored are they already of his new music. At his core, Bieber is the nice boy you meet at church camp who turns out to be not so different from the sleazy boys you meet at the mall.

'The Right Reasons' Podcast: 'Bachelor in Paradise,' 'Below Deck,' and 'Ladies of London'