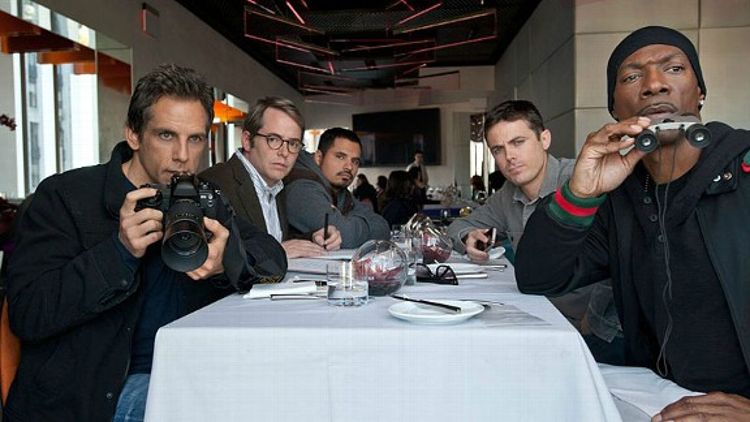 The failure of Brett Ratner’s $75 million Tower Heist last weekend was overshadowed by the director’s bigger failures as a human. Still, it must be asked: What went wrong? Heist had plenty going for it, including a timely premise, a release date light on competition, the usually bankable Ben Stiller, Eddie Murphy in his most promising role in years, and some of the least-awful reviews of Ratner’s career. Predicted to top the box office with at least $35 million, Heist made off with a mere $24 million, landing in second place behind the week-old Puss in Boots. So as Ratner embarks on an apology tour, Murphy sulks back to movie jail, and Stiller calls his agent to see if there are any Fockers we haven’t yet been introduced to, we asked a pair of Hollywood professionals (a prominent agent and producer) for insight into why Tower Heist bombed — and what the fallout might be for its makers.

1. Eddie Murphy: Not a Star.
The prerelease buzz for Tower Heist was the strongest for any Eddie Murphy movie in more than a decade. He told Rolling Stone he was tired of family movies and wanted to return to “edgy stuff.” But after all these years (and fat suits) audiences have earned the right to be skeptical: If you ignore his voice roles in animation, and his anomalous Oscar-nominated one in Dreamgirls, Murphy hasn’t appeared in a non-terrible film since 1999’s Bowfinger. Since then, he’s been collecting paychecks and stinking up theaters (his recent résumé: The Klumps, Dr. Dolittle 2, Showtime, The Adventures of Pluto Nash, Daddy Day Care, The Haunted Mansion, Norbit, Meet Dave, and Imagine That) to diminishing box-office returns (Dave and Imagine both opened to less than $6 million). So even if Murphy is funny again in Heist, do moviegoers still remember when he was funny the first time? “He does still have value, and this is a role closer to the ones in which people want to see him,” says one agent we spoke with. ” But Eddie isn’t anywhere near the star he once was.”

2. Ben Stiller: Only Sort of a Star.
As long as parents or museums are involved, Stiller is a reliable draw. But outside of his franchises, he’s no guarantee (see: 2007’s The Heartbreak Kid, which finished its theatrical run with a measly $36 million). Also, about those franchises — even with help from rising ticket prices, their grosses aren’t what they used to be: 2004’s Meet the Fockers made $279 million; 2010’s Little Fockers earned only $148 million; 2006’s Night at the Museum grossed $250 million; and 2009’s Night at the Museum: Battle of the Smithsonian made $177 million.

3. It Was Marketed as a Star Vehicle.
Despite all of the above, Tower Heist‘s marketing emphasized its lead actors above all else, including the fact that it’s a fun heist movie, a genre for which there seems to be a near-endless appetite. Most of the 2011 movies whose appeal has depended on stars — including Cowboys & Aliens, Larry Crowne, Mr. Popper’s Penguins, and Zookeeper — have tanked. “[Tower Heist‘s] poster was so confusing,” says the producer. “It gave no idea what kind of character Murphy plays. Universal didn’t know whether to market it as a comedy or a heist movie, so of course they did neither.”

4. Everything Brett Ratner Did.
Even before he took a homophobic stand against rehearsal last Friday, Ratner was already playing defense, apologizing for the seizure joke in his movie’s trailer and disputing Olivia Munn’s accusations of shrimp-fueled movie-set masturbation. Ratner’s is a name that carries a stigma, both with moviegoers and around Hollywood. Recalls the producer: “About the time Rush Hour 3 came out, a writer friend of mine got a call to develop the script for Tower Heist. He decided to take a meeting, just to go to the infamous Ratner inner sanctum. After being instructed to remove his shoes, my friend spent an hour trying to make sense of the idea while watching Ratner lift up his shirt and rub his belly like a Buddha. He decided to pass on the project and calls it ‘the best career decision ever.'”

5. It Was Too Expensive.
Heist‘s reported budget was $75 million, which is high for a movie not featuring boxing robots or computer-generated space chickens. “The reason everyone thinks it’s a bomb is that its cost made box-office expectations unrealistic. They needed a $40 million opening to break even,” says the agent. “You can’t make a comedy for $75 million — actually, Heist‘s budget is really closer to $100 million — that isn’t a sequel or a movie based on some well-known intellectual property. Even with Stiller and Murphy’s salaries, it shouldn’t have cost this much. There are no big set pieces in the film.”

6. No Foreign Promo.
Heist didn’t just disappoint domestically — it also flopped overseas (especially in Bulgaria!), bringing in just $9.2 million in foreign gross. Why? In part because neither Stiller nor Murphy left the U.S. to promote it. “Stiller was shooting a movie and couldn’t go, and Eddie never goes internationally to sell his movies,” says the agent. “It’s very hard to open a movie overseas without your stars.”

Who Does Tower Heist Hurt?

Eddie Murphy
Between Heist‘s low numbers and his withdrawal from the Academy Awards, Eddie Murphy’s comeback has been pretty thoroughly derailed. The trailer for his A Thousand Words (a long-shelved comedy whose upcoming release was supposed to capitalize on his Oscars-hosting gig) doesn’t offer much hope for the near future. “Hopefully somewhere Rick Baker is devising another fat suit to launch Eddie’s next comeback,” says the producer. “The shame of it is, he would have killed at the Oscars. I was really looking forward to him as the antidote to Franco. I think he’s an incredibly smart and talented guy who has had so much success and been told how great he is for so long that he has no idea anymore who he really is.”

Ben Stiller
Stiller will take a hit, too: “[Tower Heist] definitely hurts him,” says the agent. “It’s like that Steve Jobs quote about brands — you’re always making a deposit or withdrawal. Stiller made a big withdrawal here and with the last Fockers movie. He did the ‘Stiller thing’ in both, and both movies not only under-performed but weren’t very good either. Fortunately for him, he had another movie lined up before this one came out. He’s shooting a comedy with Vince Vaughn called Neighborhood Watch. That movie has to be a hit or he will be in very tough shape.”

Brett Ratner
Tower Heist‘s low grosses will affect Ratner, but not as much as everything else that happened this week. “His comments will hurt his career,” says the agent. “He isn’t talented enough to deal with the baggage that will linger for some time. This is a guy who started in music videos. Russell Simmons was his mentor. Not Martin Scorsese. He learned how to market and self-promote but not how to direct.”

Universal
This year, Universal brought us hits like Bridesmaids and Fast Five. But, in the immortal words of studio boss Ron Meyer, they also made “a lot of shitty movies.” Tower Heist follows 2011 money-losers like The Dilemma, Your Highness, Cowboys & Aliens, Dream House, and The Thing. “If they’d made Heist responsibly and for less money, an opening weekend of $25 million wouldn’t have been that bad,” says the agent. “The movie still wouldn’t have been a hit because it isn’t a good enough movie, but they wouldn’t have gotten hurt. That’s the key to the studio business — release a portfolio of movies and hope a few hit and no one movie wipes you out. Tower Heist is going to hurt them.”

Lane Brown is an editor at Grantland.