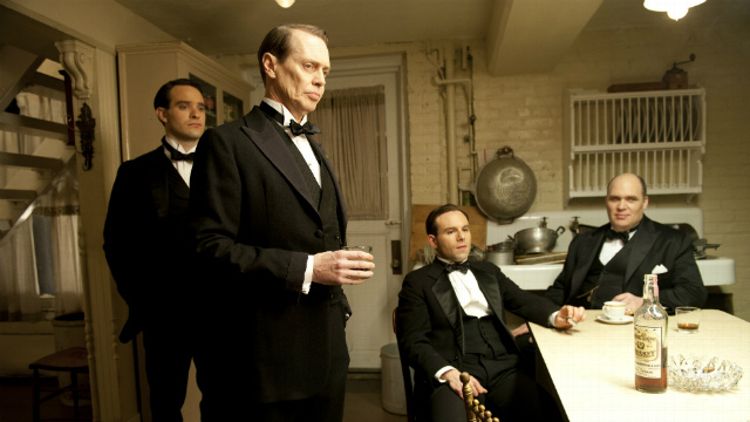 The first moments of the third season of Boardwalk Empire — returning to HBO this Sunday at 9 p.m. EST — introduce a new antagonist, Gyp Rosetti. As played by the criminally underrated Bobby Cannavale, Rosetti is a high-living lowlife, a Sicilian thug wrapped up in bespoke finery. The biggest mistake you can make with Rosetti is dealing with him in the first place. But the second-biggest is making him feel dumb. (This is a slippery business, because Rosetti, while street-smart, is decidedly book-stupid.) He desperately wants to be a gentleman, but he’s never more than a gangster. As an unfortunate Samaritan learns the hard way — like, tire-iron hard — Rosetti has a tendency to explode into shocking violence in order to be taken seriously. In other words, he’s the perfect avatar for Boardwalk Empire, a puffed-up show that drowns its myriad shortcomings in an ocean of booze and blood. It’s the televised equivalent of an empty suit.

To be fair, it’s a very shiny suit! Nothing else on TV is as sumptuous to gaze upon as Boardwalk. It’s richer than Rockefeller with period detail: the gaudy flash of an Atlantic City casino, the bootstrap grime of a Chicago speakeasy, the pewter sadness of the Jersey shore in January. But like the respectable veneer of its milquetoast protagonist, Nucky Thompson, it’s all an elaborately constructed façade. Executive produced by Martin Scorsese and steered by the Sopranos veteran Terence Winter, the Prohibition-era drama has spent two full seasons trying to gin up a story worthy of its scenery. Occasionally something remarkable has bubbled up — Michael Shannon’s loony probie baptizing his partner to death in Season 1, Michael Pitt’s Oedipal wreck imploding in a haze of heroin and self-hatred a year later — but the overall project remains perversely flat, more concerned with connecting the long-distance dots between its far-flung, slavishly accurate sets than with giving us a reason to care about the characters parading in front of them.

Pitt’s Jimmy Darmody came the closest to resonating, a tarnished golden boy and WWI veteran who had no trouble breaking bad because he was already so deeply broken. Through Jimmy, Boardwalk indulged its basest — and thus most successful — instincts. In the run-up to the second season finale, Winter practically gave himself the vapors pushing Jimmy to the edge: discovering the murdered corpse of his wife before flashing back to his incestuous history with his showgirl mother; having him betray Nucky, his surrogate father, while stabbing his real one (the great Dabney Coleman) through the heart. Like frozen custard on a hot day in Seaside Heights, the texture may have seemed artificial, but at least it tasted good. Yet at season’s end, Boardwalk Empire’s most compelling character was sacrificed not as inevitable karmic retribution or to tie a ribbon on a finished story line, but to accomplish the sort of hard work that should have been done in the writers’ room months before: making Nucky Thompson, the putative protagonist, worthy of our attention. It was shocking, but felt cheap; a flawed series trying to save face by putting a bullet in Jimmy’s.

Sunday’s “Resolution,” set on the eve of 1923, aims to wipe the slate clean by making everything a good deal dirtier. Nucky’s business is booming, and he no longer has any illusions about the price he needs to pay. “You can’t be half a gangster” was Jimmy’s prophetic warning to his onetime father figure, and HBO has seized it as a slogan for this third season. Yet it turns out half a gangster is wholly more engrossing than what we’re confronted with on Sunday. Despite the blood on his racing gloves, Nucky has become somehow less interesting. Part of this is the writing — larger-than-life men with big secrets, big bankrolls, and bigger body counts populate pay cable like so many bottles floating in the Atlantic Ocean. Whatever edge the character gains by murder is mitigated by context: Killers are a dime a dozen in this milieu; instead of struggling to rise above Nucky, now he just sinks below. But even so, the deeper problem remains miscasting. Steve Buscemi is and always has been a fine actor, but his strength comes from an overabundance of abrasive, off-kilter energy; binding him up in the stiff formalwear of a leading man robs him of it. It’s like asking a spry point guard to play left tackle. This season, when Nucky is meant to seem put-upon, Buscemi merely appears put out: With his lips pursed tighter than his immaculate cravat, Nucky’s expression suggests someone has swapped his Canadian Club for castor oil.

Poor Kelly Macdonald is in a similar straitjacket as Margaret Thompson, Nucky’s wife of convenience. The spirited Scottish actress does her best playing a moralistic scold, her days full with a busy schedule of strong-arming the church, upbraiding her straying husband, and frittering about with a series of rakish, predominantly chaste potential lovers. (Last year’s charming conquest, Charlie Cox’s Owen Sleater, is still hanging about but, in his new role as Nucky’s no. 2, he’s now free to let himself into the house, if not the lady of it.) One noteworthy wrinkle is Margaret’s burgeoning interest in women’s reproductive health — potentially fertile subject matter for a reliably macho series. (And, in fact, part of Boardwalk’s intermittent, noble feints toward feminism; Margaret was introduced as a spousal-abuse-suffering potential suffragette.) But other than the tart-tongued nun who is offended by the word “pregnant,” none of the new women are fully drawn, but instead merely sketches there to signify how far they’ve yet to go in society — and on prestige dramas, evidently.

But these are failures of execution, not performance. Indeed, no show on television boasts such a deep bench of supporting players and fringey weirdos, from Stephen Graham’s soulful and sadistic Al Capone and Michael Stuhlbarg’s implacable Arnold Rothstein to Paul Sparks’s giggly Mickey Doyle and Stephen DeRosa’s flamboyant Eddie Cantor. Though Pitt, Coleman, and the reliably nude Paz de la Huerta are gone, Stephen Root, James Cromwell, and Meg Steedle (as the flapper Nucky flips for) are able additions to the ensemble. In fact, Winter may have cast too wide a net. With so much ground to cover, intriguing plots are marooned on the margins and the best characters are simply marginalized: Michael Shannon’s tormented Van Alden now suffers anew as a traveling salesman in Ohio Illinois, the tremendous Michael K. Williams’s Chalky White is reduced to dealing with domestic drama in the juke-joints on his side of town, the murderous comedy team of Luciano and Lansky (Vincent Piazza and Anatol Yusef) are cooling their heels in New York. Even Nucky is desperate to be where the action is. Despite Gyp Rosetti’s plot-tipping scheme to control the roads that connect Atlantic City to the rest of the country, Nucky has no trouble zipping back and forth to Manhattan (in Rothstein’s — or are they the network’s? — words, “where things actually matter”) in order to share screen time with someone other than his German butler.

In the end, it may just be that Atlantic City is a vital port but no place to anchor a series. Boardwalk Empire feels more and more like a dozen sideshow diversions than like a single, comprehensive arcade. The strain shows on the screen: It’d be easier to bootleg whiskey than keep all these storytelling plates in the air. And, inevitably, some of them drop: Jack Huston’s scarred-yet-sensitive Richard Harrow, Boardwalk’s most enduring creation, is frustratingly sidelined, still trapped in the creepy spiderweb of Gretchen Mol’s whoremongering Gillian. To my mind the show’s finest hour, the only episode to elevate from prose to poetry, was the Richard-centric “Gimcrack & Bunkem.” Yet there’s little room for his idiosyncratic sadness amid the by-now familiar rhythms of insults and escalation, the increasingly vicious violence lurking around every corner: In the first five episodes alone, men are beaten to death, shot, choked, and incinerated. When a character is offered a cigarette, it’s a sure bet it’ll be his last, and when another promises his wife he’ll be home soon, it’s best to start considering a closed casket. It’s all quite savage and predictable, a series of borrowed Scorsese setups, sliced thinner and thinner like garlic with a prison razor blade.

So why, then, does it remain frustratingly watchable? Credit the crackling cast, the seemingly bottomless coffers of HBO — rich as Carnegie and twice as generous — and the superb direction of Tim Van Patten. But most of all, credit a very 1920s desire on the part of the audience to be dazzled more than enriched. In Sunday’s premiere, partygoers at Chez Nucky go bananas for the contents of a treasure chest, not caring if it’s fool’s gold or the real thing, and, in an upcoming episode, Gillian Darmody muses on her opulent cathouse in a similar fashion: “This place,” she insists, is “meant to be a dream … The light is flattering, the air is perfumed, and nothing ever changes.” It’s more than possible to enjoy Boardwalk in the same dreamy manner: as an idyll between the broadcast wars, a gilded Jazz Age trifle for the end of TV’s Golden Age. Three seasons in, this Empire has plenty of clothes. Just nothing much to hang them on.