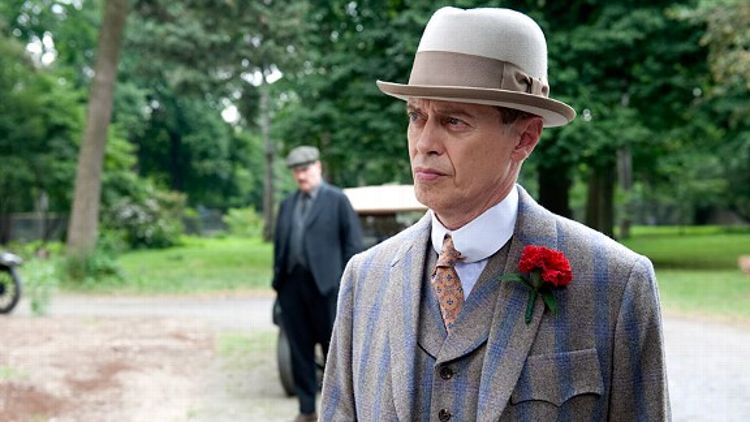 Belfast, Ireland, home of the Belfast boardwalk. Nucky has brought his father’s coffin along with Owen Sleater, crusher of skulls and gee. Margaret is stuck at home. Every time I see Katie the maid now I think she is going to blow someone and turn into Ruth Fisher, but that is American Horror Story‘s Moira. Much like in American Horror Story, Emily Schroeder won’t get out of bed. She can’t move her legs, and is unable to wiggle her toes. Polio?

Jimmy Darmody meets George Remus at the Darmody house and Remus mocks him for holding meetings out of his beach cottage’s storm porch. Remus sells his alcohol for “medical” use and talks in the third person like an asshole. Jimmy has a tendency to say funny, dickish things defensively when challenged. Angela and her Sapphic friend are nowhere to be found, probably off taking mescaline and sketching each other naked while listening to obscure Bessie Smith 10-inch 78s.

Nucky talks about the Dempsey fight with an Irishman. Ah, yes, sports, providing complete strangers with water-cooler chat around the whole wide world. Nucky’s father’s coffin is full of smuggled guns. His brash American charge-through spirit doesn’t fly in “flinty” Ireland, always wary of getting screwed by its biggers. At the actual funeral, Eli is staring at his father’s gravestone. Margaret gets no comfort from the condescending doctor who has just diagnosed her daughter. Chalky White’s jailhouse rival, Dunn Purnsley is back, taking lunch at his hotel basement kitchen job and talking about the shitty food the service workers get. The white bossman comes in and demeans Purnsley politely, the way superiors do.

Margaret’s daughter is getting a spinal tap. Margaret watches through the glass as her daughter screams and cries before face-obscured doctors in an all-white room. Esther Randolph, who is almost definitely based on American “first lady of law” Mabel Walker Willebrandt, is in bed with her assistant, Clifford, pillow-talking about the case against Nucky. In Ireland Nucky is demonstrating a machine gun to the IRA operatives, who ask if he invented it. Nucky credits sheer American innovation. Nucky had to come to Ireland because it’s the only place where they love little caps more than Atlantic City. Richard Harrow wants to settle down with a nice girl (or does he want to settle down with a nice Jimmy Darmody … ).

Jimmy meets up with Waxy Gordon. Manny Horvitz cut them in (butchered joke). Jimmy promises to treat Waxy the way Nucky used to treat him. Michael Pitt is such a Hitchcock blond, all beauty and vesselhood with the occasional seductive quip. Margaret is cleaning up her daughter’s bedroom and bringing out all the velveteen rabbits to be burned in the backyard. Her son asks if his sister is going to die like Daddy did. Just when Margaret had begun to forget about the blood on her hands. One of their maids resigns on account of the viral danger. The pyromaniac son stares on as one of his sister’s expensive dolls burns in the fire.

Nucky finally bonds over a drink with the IRA Irishmen, who are as loose on whiskey as they are Catholic sober. Esther has a weird dialogue with Clifford during an interview with the old sheriff. He patrols the boardwalk and doesn’t question authority too much. Esther asks the tough questions about Hans Peter Schroeder, Margaret’s former husband (emphasis on the “former”). Esther makes him wiggle on the hook until he gives it up, and smiles as he walks out shaken.

Purnsley approaches Chalky White in his garage, where he is working on his model train set like Bobby Bacala. Nucky has dinner with the thin-faced, round-rim-bespectacled McGarrigle, who is loathe to employ the machine guns that will turn the IRA wars into a bloodfest. He inquires after Nucky’s conscience about the inevitable resulting deaths, and Nucky says the machine guns are there for those ready to face reality. McGarrigle implores Owen Sleater to forsake the American cause (money) for the Irish one (God). Owen implies that neither is a fair master. One might best well be one’s own master. McGarrigle gets capped and they drive away from the site to trade the booze for guns.

A Hasid in Philadelphia begs the Butcher to let him in for two chickens, and Manny’s kindness is rewarded with a shot fired at him. Manny wrestles his would-be assailant into the counter and puts a meat cleaver in his brain stem. He fumbles through the man’s jacket and finds a matchbook reading “Atlantic City.” Purnsley tries to stir up the other hotel dishwashers again, talking about the long hours and lack of raises. The manager says they’re all lucky to have jobs and are easily replaced. The white bossman comes back down and fires Purnsley. He calls him “boy.” Purnsley demands a raise and a lunch the white bosses would eat themselves. The dishwashers stand up and throw the dishes on the floor, rioting in the kitchen.

Nucky goes back to America, where everyone’s an optimist but “not the Irish ones.” An IRA driver takes him to a discreet location to trade the guns for booze. Jimmy Darmody is smoking a big ol’ cigar at the fight, just like any classic lion of old-school masculinity. He gets passed a note that says “Jake Ryan is so hot.” JK, it says “watching you closely.” Some sexy flappwhores approach Jimmy and Richard. Hey, Jimmy D., watch out for golddig-lures — I saw this on The Wire once.

Margaret is at the hospital, a stately, creepy place where she seeks out her daughter in the quarantine room. She brushes her daughter’s hair and cries, asking for forgiveness. She believes this is her spiritual punishment for all the sinning she has done in Atlantic City. “Everyone knows who the new king is,” say the drunk club rats. The ginger one sees Richard and chalks up doing him to a fun new notch for her garter belt. Again, is she blind? He has half a face. Some people might even prefer kissing one half Jack Huston face to an entire Steve Buscemi face.

Owen Sleater ingratiates his way back into Nucky’s good graces. Ever-fatherly Nucky accepts, but says he doesn’t like secrets. Owen is a good liar and a charming flirt, like any good Irish sort. Nucky gets the telegram about his daughter’s polio just as they are boarding the beautiful, gigantic, matte-painted ship back home. A cracking episode, if a little slow. The whole “going to Ireland” thing smacks of pulling out all the stops building up to the season finale, like sending the Sex and the City girls to L.A. (or Donald “I Left My Dick in San Pedro” Draper, for that matter).

Having a billion plotlines that meander like hilly dirt roads and threaten to go nowhere — exploding sometimes into violence, sex, drink, music, and afterwards guilt, shame, sadness, and more violence — is terribly Irish. And the truth is that for lower classes of all colors, doing dishes, washing laundry, and mopping up after an unfeeling and undeserving upper class feels a bit humiliating. There are three episodes left in Boardwalk Empire‘s second season, and it feels like the whole world might explode.