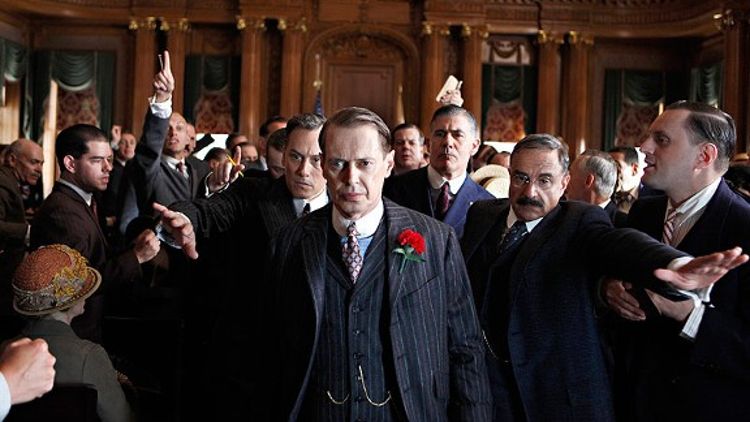 A jalopy pulls up at a Klan meeting with two masked men. Richard and Jimmy, recognizable by Jimmy’s distinctive teen-dream bang-tendrils and Richard’s hat, hop out and start firing. They take prisoners for crimes committed against Chalky White’s gang. In Philadelphia, Manny The Butcher is hiding in a synagogue, laying forth on crime and punishment. “Everyone’s a crook.” I bet you say that to all the crooks. Manny also has a bang tendrils situation (this hairstyle is called “The Nazi Youth”). Perhaps he, too, was once a heartthrob. Manny says he wakes up sometimes feeling like he’s still a 12-year-old kid with all the important life decisions still yet to be made. Don’t we all? Manny’s biggest problem is named Waxy Gordon. All this Waxy buildup is trifling (sorry), but Nucky is willing to consider it for a fee, burning off hostility about his trial. The guards watching Chalky’s headquarters open the gates for Jimmy and Richard, each driving one jalopy. Jimmy gives Chalky the package, money from the Klan for the victims, plus the three racist gunmen. Dunn Purnsley smiles thinking about torturing them. Jimmy asks Chalky to broker a meet with Nucky.

Richard and Jimmy share a milkshake through two straws. No they don’t, but they look like they want to. Emily Schroeder practices walking on her crutches while the maids supervise. Owen Sleater once again politely (i.e., crushingly) ignores Katy. Esther Randolph demands a shaved cherry ice in the heat. Career womyn, always wanting cold slushies. Margaret Schroeder is there to see Esther, along with her creepy priest buddy. She dismisses the creepy priest for some one-on-one lady time with Esther. Margaret tells her how Hans Schroeder was a drunkard and cheat who beat her and their children. Esther asks whether Margaret would rather be portrayed as “helpless” or a “gold digger” during the trial. Esther presses Margaret to corroborate the case against Nucky in order to leaven the guilt of her blood debt. Margaret doesn’t like Esther’s bloodthirst for her common-law boyfriend.

Nucky is also feeling the heat, drinking liquor, and demanding colder ice. His lawyer, Fallon, wants to talk about Margaret’s testimony. The background chaos noise of the fan and a ringing telephone adds to Nuck’s edginess. Chalky White calls him up. Poor lonely Jimmy, left alone with the beach and some wind chimes and hopeless thoughts of getting raped by his mom in flashback last week. Jimmy cocks his glock and lurks down through the stairwell, awaiting Nucky, who arrives with Owen Sleater. Way to bring your new trophy boyfriend around your old one, Nucky (smart move). Owen backs off, hopelessly intimidated by Jimmy’s pouty blondness and DGAF demeanor. He tells Nucky about Angela’s murder matter-of-factly and Nucky plays dumb about Manny. They’re both coy, but you can tell they wanna HUG SOOOO BAD. Especially after Jimmy talks about killing his father, and Nucky reveals how directly he sympathizes. (“He was your father, nothing looms larger.”) Jimmy sure is talkative this episode for a guy whose entire life has consisted of emotional numbness and violence used to blunt out accumulated traumas. Nucky asks why Jimmy is clamming up about the arranged assassination attempt, and Jimmy rats out Eli. Nucky seems comforted that it was his slimeball brother rather than faux-son Jimmy.

Nucky confronts Margaret across the kitchen table and attempts using a little light humor to talk about their differing versions of Catholicism. Nucky tries to explain that he adheres to a moral code wherein everything he wants to do is sanctioned by his God as long as it feels beneficial to his family’s welfare. Margaret, knitting, does not seem wholly impressed. He proposes that she marry him to save his life. She expected something more romantic, perhaps. The tea kettle whistles over Nucky’s phony apology for his sins, which sounds about as convincing as Don Draper’s lies to Betty Draper or Walter White’s insistence that he is just providing for his family.

Uncle O’Junior cuts up The Commodore’s will with Jimmy and his Hell-MILF (trend piece title: “Gretchen MOLF”), and it appears that his would-be arsenic-cookie killer former maid LuAnne gets all the loot. Gillian tries to give Jimmy some bargaining advice which he shrugs off in the manner of Eric Cartman (“Moooooooom”).

Margaret looks out the window to see Nucky playing dad to Emily, helping her walk across the lawn on her braces. Margaret puts on a white lace dress and tells Nucky they’ll be heading to church for her to make a full confession and then get married. Esther Randolph practices her opening statement in front of the mirror as she fastens up her blouse and puts her stockings on. Margaret and Nucky take their vows before some traditionalist nonsense about obeying your husband like a god. Richard and Jimmy pace the hallway as Boss Neary rails a chick against a desk. They tell the girl to get out. Esther asserts that “Enoch Thompson is a man loyal only to himself.”

They really threw the “Gangster Movie Cross-Cut Montage” filter on this sequence. Richard shoots Neary in the mouth. Esther finishes her speech and her secretary/slam-piece applauds her from the bed. Esther greets the realization that her star witness to be has dropped out with an accusation of blatant witness tampering. A mistrial is declared as Nucky escapes charges and is free while Deputy Halloran gets screwed yet again. At the beach Jimmy puts his son on a pony and tells him a story about when nickels had bumblebees on them. Jimmy’s son is all “cool story, Dad” and then peaces out on a horse down the shore while Gillian chills menacingly in the background.

Nucky announces to Margaret that he is drunk, possibly by way of a come-on. He claims that Neary’s suicide and the mistrial were just happy accidents. Having opened up just long enough to believe that Nucky might not be a compulsive liar or at least is capable of positive growth or change, Margaret has come back down to earth and the unfortunate truth. Nuck asks if he’s allowed back in the bedroom and Margaret says, “We are married.” She realizes she should’ve seen the good-dad act for what it was, a campaign stunt mean to get him elected husband. And it worked!

Eli Thompson is sitting on his shade porch dressed like Lennie in Of Mice and Men as cicadas hum loudly. “How about those Phillies and my brother trying to have me killed?” says Nucky to break the ice. Nucky is at his best as a hokey stand-up comedian and Eli is supreme as a dumb lox for his brother to play against. Nucky demands honesty, a tall order from a man who can’t stop lying for even the shortest time. Nucky tells his brother that he is to plead guilty and serve a two-year sentence in the clink. Eli shakes his head and exhales as he accepts his fate. There’s no such thing as a free lunch. Lucky Luciano is shilling Chinatown heroin to Arnold Rothstein in a briefcase. They are going to dominate the New York gangster street-art world soon (honestly, a Boardwalk Empire/How To Make It In America crossover makes a lot of idiotic sense. Paz De La Huerta could fall in a time-warp hole connecting the two fictional universes). Nucky asks Rothstein for help with Manny Horvitz. They all agree that they wouldn’t mind if the Butcher ended up as a dead side of beef soon.

Michael Shannon and his baby-nanny are putting a down payment on a little dream cottage in Cicero (Illinois). It’s nothing but rainbows and happy endings for Van Alden. Richard Harrow and Jimmy are getting loaded in Jimmy’s dad’s dark-wood paneled rec room. Richard tells another meandering bittersweet anecdote. Man, that guy sure has a lot of those. Jimmy gets all stern father figure for a second on Richard, which gives Richard a raging half-boner he has to cover up with a half-textbook. Jimmy answers a bat-signal from Nucky to take care of Manny Horvitz. Richard offers to do it, but Jimmy says it’s “something I gotta do myself” which are such famous last words they are a stock inscription for gravestones. Gillian is playing with Tommy (hopefully not doctor). She strokes the insides of his downy little thighs and says, “This is where Grandma lives.” No-just-kidding-she-didn’t-but-I-wouldn’t-put-it-past-her!

On a rainy, overdressed set, Jimmy gets patted down by Owen and is shown to be unarmed. He tells Nucky he “died in the trenches, years back.” Michael Pitt is really earning his Emmy nomination in these past two episodes. Nucky holds a gun up to shoot Jimmy. Jimmy forewarns Nucky that he will eventually “run out of booze and run out of company” and be left alone to judge himself for his crimes. Nucky plugs Jimmy in the head and says “I am not seeking forgiveness.” Too bad I kinda wish Jimmy had murdered Nucky instead of the reverse. Oh well. Goodnight Jimmy Darmody, my sweetest shell-shocked soft-lipped sad-eyed laddie of the HBOlands.

A flashback to the trenches where Jimmy “died” and no flashbacks to the bed in which he “died” the biggest little death with Gillian last week. Over the table Margaret asks Nucky where he’s been in the rain. Nucky lies (as easily as breathing) that he made up with Jimmy, and that Jimmy plans to reenlist. Nucky thinks he is doing everyone a favor by telling them lies that will make them feel better, but nobody feels better about anything when somebody they want to trust is lying to them. Margaret fondles a map like she might make a rash decision, having shaken off the doldrums she was forced into the past few episodes. Nucky meets his comrades to pop bottles in a future freeway field while Margaret signs the deed to the road repairs away to the church in revenge (and sports a cool new low-braid crown thing while doing so).

I am obviously crushed Jimmy is dead, but I can’t say I didn’t see it coming. All the father-son wrap-this-plotline-up-once-and-for-all talks didn’t quite have the gravitas they seemed like they were supposed to. Last week’s episode was much heavier all in all, and I find that I often remember penultimate episodes the most fondly, as they bear none of the burden of tying things up. That said, I look forward to seeing what kind of a “reboot” effect this has on Season 3, and fictional worlds where sympathetic main characters can die are the only kind worth watching. Most important, where the hell was Lucy Danziger? I fully expected to see her taking the stage in the Gershwin musical she skipped town to try out for. Nuckyyyyyyyyyyyy,