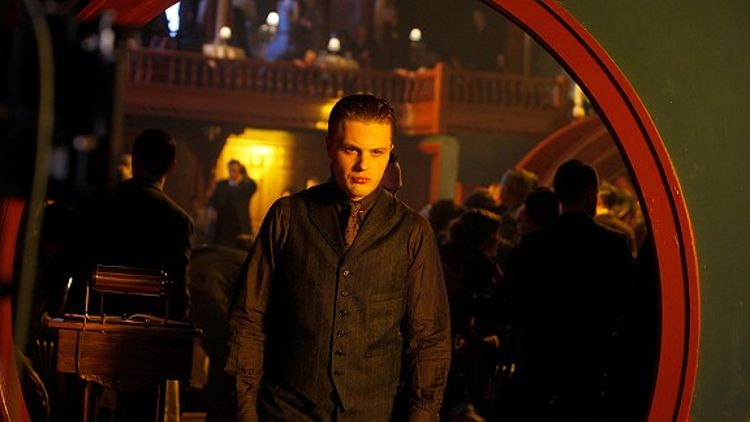 Snorewalk. This episode made the How To Make It In America that followed it seem positively action-packed in comparison. Not that plenty didn’t happen, it just happened mostly in discussion. Show don’t tell. First rule of Canadian Club! Jack Dempsey brings a little person dressed as a Frenchman into the ring as a gag. Somewhere in King’s Landing, Tyrion Lannister shakes his head in disgust. Dempsey does the walk ‘n’ talk outside the tent with Nucky. Nucky is broadcasting the fight over old tymey HBO. A nosy reporter asks Nucky about his election-rigging case and Nucky sics Jack Dempsey on him. Van Alden returns home to his love nest, where Lucy reminds him of his insane plan to pay her for giving him a child. Van Alden shrugs in admission that he doesn’t have the $3,000 he promised her. Van Alden storms out on Lucy and his still nameless child like a deadbeat.

The Fellowship Of The Commodore meets in his stuffed-bear-adorned and much-filigreed hall. Jimmy is talking more than ever, taking command and taking up the commodore’s fine leather chair. Eli Thompson appears and suggests they kill Nucky. Jimmy doesn’t want to sign off on this; he would rather send pseudo father figure Nuck to jail, but he can’t look weak. Van Alden shows up to his office to find a woman at his desk on the phone with the attorney general. She is Esther Randolph, assistant to the attorney general prosecuting Nucky, and she comes with a chief investigator and two clerks. She also comes with a sassy-ass attitude, which both rankles and arouses the more-easily-aroused-than-he-looks Van Alden. Van Alden tries to assert his authority, but she effortlessly shuts him down with sarcasm and tidiness.

A B-plot grows in Brooklyn, where Margaret has come to visit the rest of her clan. They recreated the street set in intense period detail to look exactly like Brooklyn in 2011, down to the open-air Laundromat, artisanal pickle markets, and children with silly names playing with handcrafted jump ropes. Margaret is faced with a gaggle of Irish moppets, the sisters she never really knew. Her brother walks in and gives her the long side-eye. He calls her Peg and agrees to let her into the house, giving her a cold hug and offering her dinner (potatoes, of course). Nucky gets the brief on Esther Randolph, USC graduate and defender of prostitutes. Speaking of loose women, Lucy shows up at Nucky’s office with her bassinet and same old pilled out lilt. She is here not just to play everyone’s least/most favorite game (“Remember when?”) but to ask Nucky for some cash before she skips town.

Esther Randolph is taping interviews with Nucky’s associates in an office. Van Alden, displaced and unhinged, heads out early. Margaret eats dinner with her relatives and is made to feel less than comfortable by her angry brother. He shames her for having traded up into wealth while his family eats potatoes for dinner and he works his fingers to the bone. Jimmy’s mom changes in front of him for the billionth time as she fishes for compliments about how young she looks. Jimmy pouts and smokes. He asks for counsel about stopping Nucky’s assassination and Gillian suggests they face that the order’s already in motion. She whispers “make me proud of you” in his ear and he tries to calm his Oedipal boner. Van Alden storms into Nucky’s office to see Lucy waiting there. She picks up her baby and saunters away. Nucky, especially smug, offers Van Alden a drink. Nucky offers Van Alden an extra living wage in exchange for all the information on Esther Randolph he can find. Margaret turns down her brother’s offer of a cigarette. He tells her that their mother is dead and appears hurt that she found out from somebody else. He guilts her by saying he told mom she’d be coming home and says, “Will you weep, Peg, now that it doesn’t matter?” Oh, Irish people. She says running away from home was better than being broken in the workhouse or the Magdalene asylum. She ran away because she got pregnant out of wedlock (she had claimed she was forced), and then miscarried on the way over. She tries to give her brother money, but money can’t buy you the family you left behind. He takes it anyway. Gillian and Lucky Luciano are getting it in because cougar-boy love is the subtheme of tonight’s HBO Sunday.

Van Alden returns to an empty apartment. Lucy has run off with the money and left the baby behind with a strange neighbor lady with a diaper on the phonograph (and the overly pat “why would she leave it there?” smoking gun, the script for A Dangerous Maid). One of Margaret’s li’l sisters reads Nucky like a book about horses. The bookish sister follows Margaret out into the hall, as Eamon heads out for the night shift. Margaret promises to send her horse books. Van Alden reads the bible (as always) and sorts through potential baby names. He comes in the next day and tells Esther Randolph straightaway about the new addition to his family. She ices him with the choicest neg and then rolls her eyes. He shows and proves with his enormous file on Nucky Thompson. Esther’s eyes widen. Suddenly interested again, she starts paging through and dismisses Van Alden. Margaret leaves her sister with a book called A Girl, A Horse, And A Dog, which sounds fucking filthy. JK it’s by Francis Lynde, but when you Google it one of the first five things you get is the Wikipedia page for “human-animal marriage” (not recognized by law in any country).

Margaret’s sister asks about what their dear mother was like and shows some of the passionate headstrong (Irish) qualities of her elder sister. Eamon says he doesn’t feel anything about her and gives her back the money she offered. He says she is not to visit the sisters again, nor give them gifts to ease her conscience. She climbs into her fancy taxi and cries. Nucky hasn’t heard from Owen Sleater, who is drinking in a dark cellar. Owen strikes up a conversation with a fellow from Ireland about home. He follows him into the bathroom and strangles him with a wire, some kind of IRA business, as passersby walk above on the grate. Sleater spits on the “traitorous fuck” as he leaves him bloody in the urinal. Somebody tells a terrible dirty joke. Between Boardwalk Empire and Mad Men, I wonder who the terrible dirty-joke tellers were in the Sopranos writers’ room. It comes up so often.

Jack Dempsey makes a speech, showboating all the way. Nucky takes notice of a girl with a Louise Brooks bob. Is she a rival’s plant to catch Nucky’s attention? Is it just to make us feel less guilty about rooting for Margaret to sex Owen Sleater? Jimmy approaches from behind with his hands out. He gives Nucky slight warning and somehow Nucky ducks the shot from the assassin, getting hit in the hand. A federal agent watching the whole scene shoots Nucky’s would-be killer and flashes his badge. Margaret returns home with her head hung low. Opportunistically enough, nobody is home except for Owen Sleater. She checks him out from the crotch up. He makes polite small talk and she curtly wonders aloud what he ought to be doing and where instead. He brings up their shared Irishness, no doubt preparing to strangle her. Assimilating into Americanism has its costs in additions to benefits. She brushes him off again, which he luvs, and then tells him he can bring the bag up. He comments on her coolness, which she explains is a front that has little to do with her real self. She takes her hair down and undoes her wrist-buttons as she succinctly explains the terms of their intercourse, which involves not talking about it ever again (honestly still pretty cool, Marg-dog). Sleater is all “You had me hard at hello.” That’s terrible. So was this episode(ish).