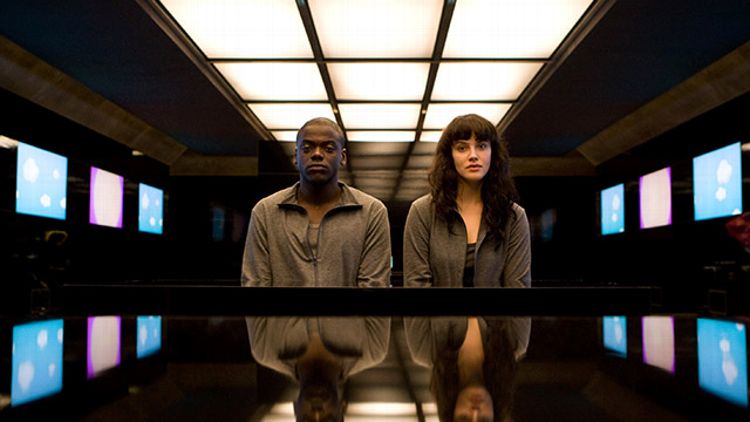 For six weeks, I will be responding to the British sci-fi series Black Mirror, which originally premiered on Channel 4 in 2012 and is currently making its debut on North American television via DirecTV. These are not meant to be strict recaps, but there will be plenty of spoilers, which, trust me, if you plan on watching the show, you do not want.

The most brutal blow of “Fifteen Million Merits” doesn’t come until the end, and it’s brutal precisely because you did not expect it to strike where it does. For the majority of the hour, you have your hands up, guarding the familiar targets of reality TV, pop-up ads, the joylessness of virtual culture and hive mentality. “Fifteen Million Merits,” probably the most far-future installment of Black Mirror, plays like a tragic version of Mike Judge’s Idiocracy, except without the benefit of a smarter outsider to give us those reassuring “what’s up with that” reaction shots to the cartoonishly crude hit TV shows of the future (I’ve already got my season pass for Botherguts). It puts our own present-day culture into an accelerator and pulls out a thoroughly warped version that is all the more eerie for how recognizable it is. That’s just good solid sci-fi, and who doesn’t like to talk trash about garbage? It feels good to tell ourselves that we’re smarter than the pablum the lamestream media tries to sate us with. But in its final minutes, “Fifteen Million Merits” completes the circle and punches us in our soft, sentimental underbellies, reminding us that even our supposedly clear-eyed dissent to such things can be packaged and sold.

“Fifteen Million Merits” ultimately isn’t about shitty reality TV and the cost of fame, though it comments nicely on both those topics, along with a host of others. It’s about punk rock. It’s about how the search for the “genuine” and “noncommercial” and “alt” leads you right back into the trading floor. From the start of the episode, our protagonist, Bing (the wonderful Daniel Kaluuya), longs for what he calls “something real” and finds it where he can in his sunless life in a bike-powered energy plant. For his midday snack he opts for apples over processed foods. His entertainment of choice is a simple CGI rendering of a rolling, toy-like landscape, which looks like Dogme 95 next to the noisy, senseless programming his coworkers opt for. He’s as much of a hippie as one can be in this particular dystopia. When he first hears Abi (Jessica Brown Findlay, “Way Hot” from Downton Abbey) singing in the bathroom, it’s implied that he’s drawn to her not for her virtuosity, but for her unpolished expression. The episode glides along for a while, following these two supposed beacons of hope as they climb the mountain that will hopefully lead to a better life. But this is Black Mirror — not The Hunger Games, that other dystopian tale of televised rebellion — and as we’ll come to realize over the next few weeks, things rarely work out very well for anybody.

I’ve been watching a fair amount of creator/producer Charlie Brooker’s pre–Black Mirror work this week, particularly clips of the Wipe series and 10 O’Clock Live, so I had somewhat fresh eyes when revisiting this week’s episode. It’s a much more personal story than I originally noticed, because Brooker more or less plays a Bing-like role in the U.K. media, minus the shard of glass to the neck. Part of Brooker’s appeal, if you’re a fan, is his endless reserve of bile; there isn’t much that he gives a pass to, be it sensationalist news coverage or the iPad 2. He makes those of us who claim to have clarity about how our culture sausage is made but still indulge in some Real Housewives now and then look lazy by comparison. But he is also obviously smart enough to have recognized the irony in his being given a podium by the same corporations whose programming he reads to filth week after week. So the question, I suppose, is whether it’s worth it to work yourself up this much — assuming that we’re all going to die anyway and there is no afterlife where we are rewarded for how valiantly we resisted and spoke out against consumerism/the patriarchy/animal byproducts.

I guess the point is that the “system,” whatever that entails, accounts for our basic human need to rail against this stuff now and again and feel as though we are rebelling or being iconoclasts or speaking truth to power before we get complacent again and eat a bag of Cheetos. That could be a literal bag of Cheetos, or it could be figurative, like recapping and therefore promoting American Idol or letting your band’s song get licensed for a car commercial. You know, “selling out,” an arbitrary idea that doesn’t stay fixed for long even in one individual’s mind, much less a society. The point, more or less, is to not contribute to intellectual pollution, like Bing spending precious merits to wave away commercials in an endless struggle to maintain some kind of neurological purity. But where do you draw the line? You can’t just stop watching Teen Mom because it’s exploitative, you have to unsubscribe from cable and stop buying products that sponsor Viacom programming and maybe just gouge out your eyes and never look at another image again so as not to look at it the wrong way. And anyone who claims they have never “sold out” in any capacity is probably kind of a jerk, so they’re still kind of contributing to the overall negativity of the world. Etcetera, etcetera. It’s bikes all the way down. Have a nice day!

No, seriously, as dark as its final implications are, this is my favorite episode of Black Mirror, not only because it speaks to the paradox run into by anyone who wants to communicate for a living and also has a conscience. It’s also chock-full of bleakly funny sci-fi ideas straight out of our societal nightmares, like advertisements that scream at you if you close your eyes or look away, or buying suicide weapons for your online avatar. I like how Brooker doesn’t attempt to paint our two albeit very likable protagonists as particularly smarter than their peers. Even as they’re kindling the beginning of a romance, they speak to each other in dull mumbles, trading observations about vending machines and fashioning paper trinkets for each other like children. This makes Bing’s climactic speech all the more heartbreaking, because he’s speaking clearly and loudly and from the heart for the first time, and it isn’t going to get him anything but a permanent position as the guy who speaks clearly and loudly and from the heart. Hmm. Has Kanye seen Black Mirror?