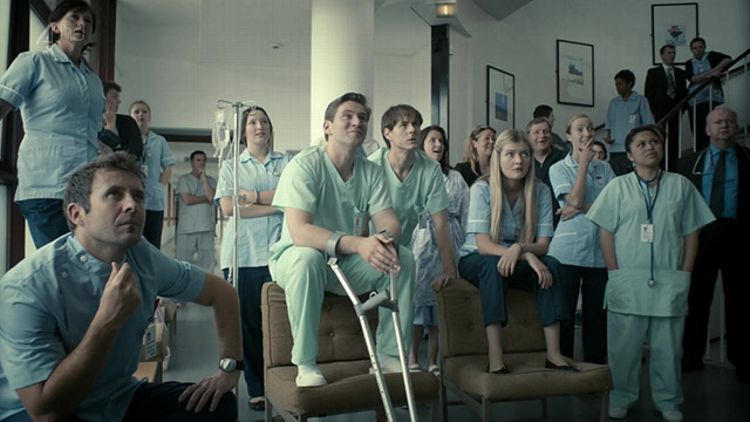 For six weeks, I will be responding to the British sci-fi series Black Mirror, which originally premiered on Channel 4 in 2012 and is currently making its debut on North American television via DirecTV. The entire series is currently available on demand for subscribers, but I will be writing about each episode as it airs on the Audience Network. These are not meant to be strict recaps, but there will be plenty of spoilers, which, trust me, if you plan on watching the show, you do not want.

For a while now, one of my perennial Internet rabbit holes has been North Korea’s Internet presence, particularly news footage from North Korea. I do not want to minimize the real, tragic, horrifying human rights violations that happen there on a daily basis, but in a way that’s what makes the surreality of DPRK propaganda even creepier. There is a real-life dystopian horror movie happening on our Earth right now, and for the most part, we are not allowed to go anywhere near it. The government is attempting to keep an entire society in a box, with only a few airholes poked through in what it believes to be flattering places. But even in a country whose entire perimeter is guarded by snipers, a few escapees will slip through and live to tell of the unimaginable conditions inside that box. People, and information, can never completely be held against their will, if WikiLeaks has taught us anything.

But we have to tell ourselves that some of our secrets will be kept safe, that nobody will find our angsty college LiveJournals or our post log from a role-playing BBS on the Wayback machine. If you imagine everything you have ever typed or uploaded to the Internet suddenly being emailed to all your friends, you’d never take another selfie again. In the wise words of Daisy Buchanan, “I like large parties. They’re so intimate. At small parties there isn’t any privacy.” The Internet is so big and full of distractions that its easy to imagine that the likelihood of anyone actually paying any attention to what you’re doing is small.

And for most people it is pretty small, but most people aren’t running a dictatorship or being forced to fornicate with a pig on live television. After my first go-through of Black Mirror I had remembered “The National Anthem” as one of the weaker entries of the six episodes, but on second viewing it’s actually a perfect amuse-bouche for the more elaborate, stranger courses to come. Like those early episodes of Breaking Bad, “The National Anthem” clearly states this is a show that will have an airtight internal logic. It introduces a crazy scenario into what is more or less our present and lets it play out exactly the way it would, heavily accounting for how the ravenous information buffet of the Internet would shape events. When the hostage tape of Princess Susannah is first brought to the prime minister’s attention, the cabinet foolishly thinks it can keep a lid on the situation and its demands. But because the video is on YouTube, for all to see, the pressure on Michael Callow to go through with the act isn’t just coming from the assailant, but from anyone who watches the video and forms an opinion of what the best course of action is. Efforts to keep the video from the public are futile; “We take down one, immediately six clones pop up elsewhere,” an adviser tells him with resignation (hi, Maester Luwin!). It doesn’t take long before Callow’s initial declaration — “This only exists in this room!” — seems utterly laughable.

This basic modern-day truth would be compelling enough to hang an hour of story on, but in a great flourish, writer and series producer Charlie Brooker shows us scenes of several groups of civilians around the U.K. watching the events play out on television. Attitudes vary, but even the most squeamish can’t contain an underlying fascination with the possibility that they may be seeing a political leader commit bestiality on television. That’s the perhaps deceptive part of the assertion that “information wants to be free” — it puts the onus on the information, not on we the people who will eat up any sentence, sound, and image we can get our hands on, especially that which seems forbidden. If the world is a mystery novel, we’re living in a society that increasingly wants to skip to the end, even if that’s not always the most enjoyable way to live. When Callow finally appears on the broadcast, we see a pub full of onlookers cheering anarchically, thrilled by the WTF-ness of the situation and the anticipation of seeing something unprecedented, no matter how gross.

But sometimes our eyes are bigger than our information stomachs, and we end up seeing something that we didn’t want to see, information we immediately know is not making us better or smarter or happier. That, to me, is the real kicker of “The National Anthem” — once the pig-fucking commences, the entire momentum of the episode changes, and we see the viewers’ faces slowly morph from excitement to disbelief to horror to sadness. The crowd-fueled euphoria breaks, and suddenly everyone is alone, watching a man degrade himself on television, feeling dirty and ashamed and sad about the entire situation. It’s like a wild night out on the town, saying yes to every drink and hit and shot and location change in the name of experience, only to wind up puking in an alley while your friends ditch you. Was it worth it to blow up the fun bubble until it burst, just to see how big it could get? Does doing something “for the story” mean anything if the story is just kind of boring and sad?

I don’t imagine that it really matters. For better or worse, it’s human nature to test the boundaries of how much data (or alcohol) we can handle until we decide we need to quit Facebook or go to AA. It’s incredibly naive to think we’re anywhere near kicking the habit as a society. Even when I beseeched you to watch Black Mirror the other day, I had to force a facetious kind of naivete about its availability (re: flying to England), as if international licensing has any real power over anybody. Content licensing and unlisted profiles and privacy settings are like putting a sieve in a waterfall, because our computers and smartphones are essentially anti-privacy devices. Even in the opening moments of the episode when the midnight call first comes to Callow’s cell phone, he instinctively silences it, only to hear his landline ring. Information will always find its way to us, not because it “wants” to, but because we signed up for it.