Beavis and Butt-Head Recap: Back on the Couch 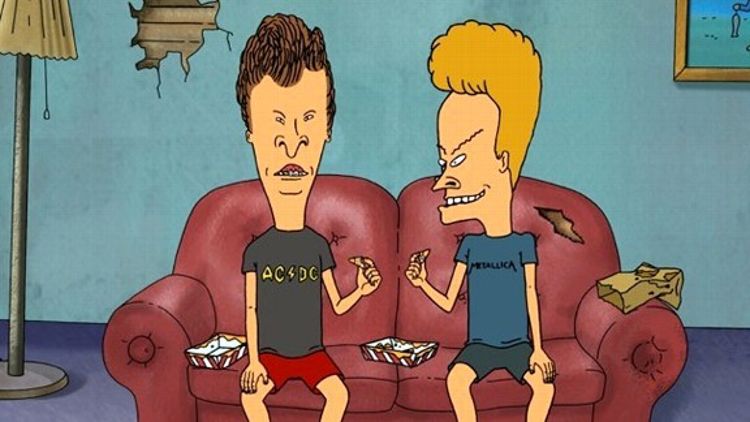 Ya know, I gotta say — and I don’t want to sound petty here at all — but it’s really nice to see how some people can keep up their looks after all these years. With these ’90s nostalgia reunion things you usually take what you can get: The guys are balding or they’re trying to cover up their guts, or they want to rock but they really just suck. It’s depressing. But Beavis and Butt-Head, man, they don’t seem to have aged a second since 1997 — same skin, same socks, same couch, same everything (I thought they’d auctioned off the couch at Sotheby’s, but guess not). Anyway, whatever you’re doing, boys, bottle it. And pass a swig over my way; I’m looking a little Chandler Bing circa 2022 these days.

Beavis and Butt-Head are back on MTV in 2011? Why? Who gives a shit. Anything that can occupy space that might’ve otherwise been subsumed by Teen Mom can only be a good thing. Bring back Remote Control while you’re at it. Pull Downtown Julie Brown out of the supply closet and give her a shake. It’s all good. In the show’s first episode since going off the air fourteen years ago, our old buddies go see Twilight and try to become werewolves so they can get chicks (which they do, of course, sort of). In my imperfect memory of the ’90s, they were always far too enwrapped in their bubble world of licking toads and rocking out to “Rusty Cage” and trying to be as cool as Todd to get ensnared by a pop culture trend like undeadness chic. But it’s a pretty clever way for Mike Judge to underscore his decision to leave them agelessly crystallized in postpubescent amber (which was no decision at all). By the end of the episode, he’ll reverse the gag, speed-aging them to a self-pooping ninetysomething, where Butt-Head will breathe his last chili-dog-smeared breath while making fun of Beavis for that time he cried back when they were (eternally) 14. It’s like the laziest remake of Primer ever. But the point is well taken: You can speed time up, or slow it to a crawl, or step outside it altogether, a good joke remains ageless — like have you heard the one about the two junior-high doofuses who are actually the greatest pop critics of their age?

As ’90s reunions go, the return of B&B was great-to-excellent — certainly up there with Superchunk, though maybe not quite as fine as Pavement. Now, they watch reality TV along with their video intake, and since videos aren’t actually on MTV anymore they have much weirder, Internet-geared video fare to spit vivisecting aphorisms at (just describing Skrillex’s “First of the Year (Equinox)” is comedy gold). But if the old joke proves ageless, history itself keeps on moving, and keeps on sucking. When the dastardly duo arrived in 1993 they sent PMRC-type scolds into a tizzy by being the reductio ad absurdum of post-Axl Rose metal-boy id. Now, they return as avenging angels of morality: Unlike the dreamless, humorless, chinless human-shaped Jell-O blobs that ooze their way across an episode of 16 and Pregnant or Addicted to Porn, Beavis and Butt-Head always understood how miserable they are (“How come we were born as us? It’s not fair,” Beavis asks while watching a partied-up LMFAO video). But they never stopped scouring the swamp lives they’ve been dealt for ripples of trickle-down awesomeness — who else but these guys could have the unsinkable optimism to still be looking for something cool on MTV in 2011. Hail to thee, blithe spirits.

Last night, they were downright cranky in dispensing their swift-sword dispatches — cutting into the crassness of a parent who would put a toddler in MGMT’s “Kids” video (“You’re one, it’s time you started pulling your weight around here”), and calling out JWOWW on her foul mouth (“She’s gonna call her grandkids bitch?”). At some points, they were almost too engaged, descending from their divine state of truth-saying dumbness into the merely mortal realm of knowing MST3K-like smart-ass irony: Watching LMFAO, the Beav notes that “the economy sucks, nobody has a job. These guys are just spraying cheap champagne.” Of course, he thinks it’s cool, but we know: Income inequality sucks.

Hearing the Great Cornholio deploy the word “economy” was jarring. He shouldn’t know there is such a thing, much less that it’s bad and that the badness he’d perceived could be contrasted with the decadence of a cultural product he was consuming. Or maybe the ’90s just didn’t serve up ironies this urgent for him to spit back at us. Well, I guess he’s figured out that the holiday from history is over. Eternally ageless or not, we’re all prisoners of our moment.

Previously: Thanks, R.E.M.
Unkool Thing: Notes on the Split of Sonic Youth’s Kim Gordon and Thurston Moore
Beavis, Butt-Head, and Me