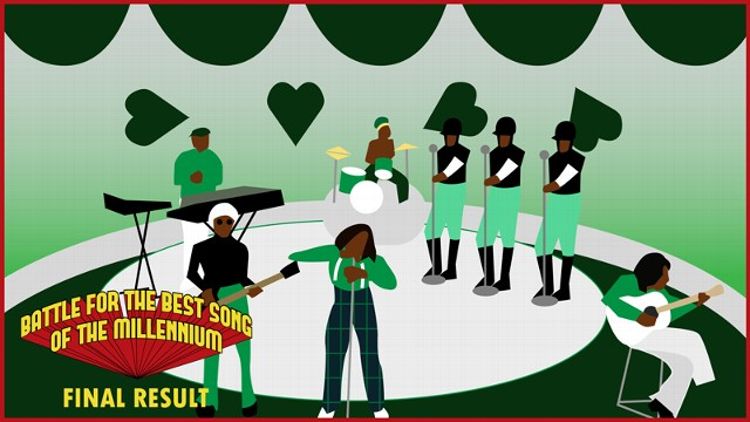 When you get to be Steven Spielberg at the end of the Academy Awards with the Best Picture envelope in your hand, you don’t waste the public’s time with a long-winded preamble. You stare into the teleprompter and dutifully read off the mass-appeal entertainment product that garnered the most votes. So, here we go: 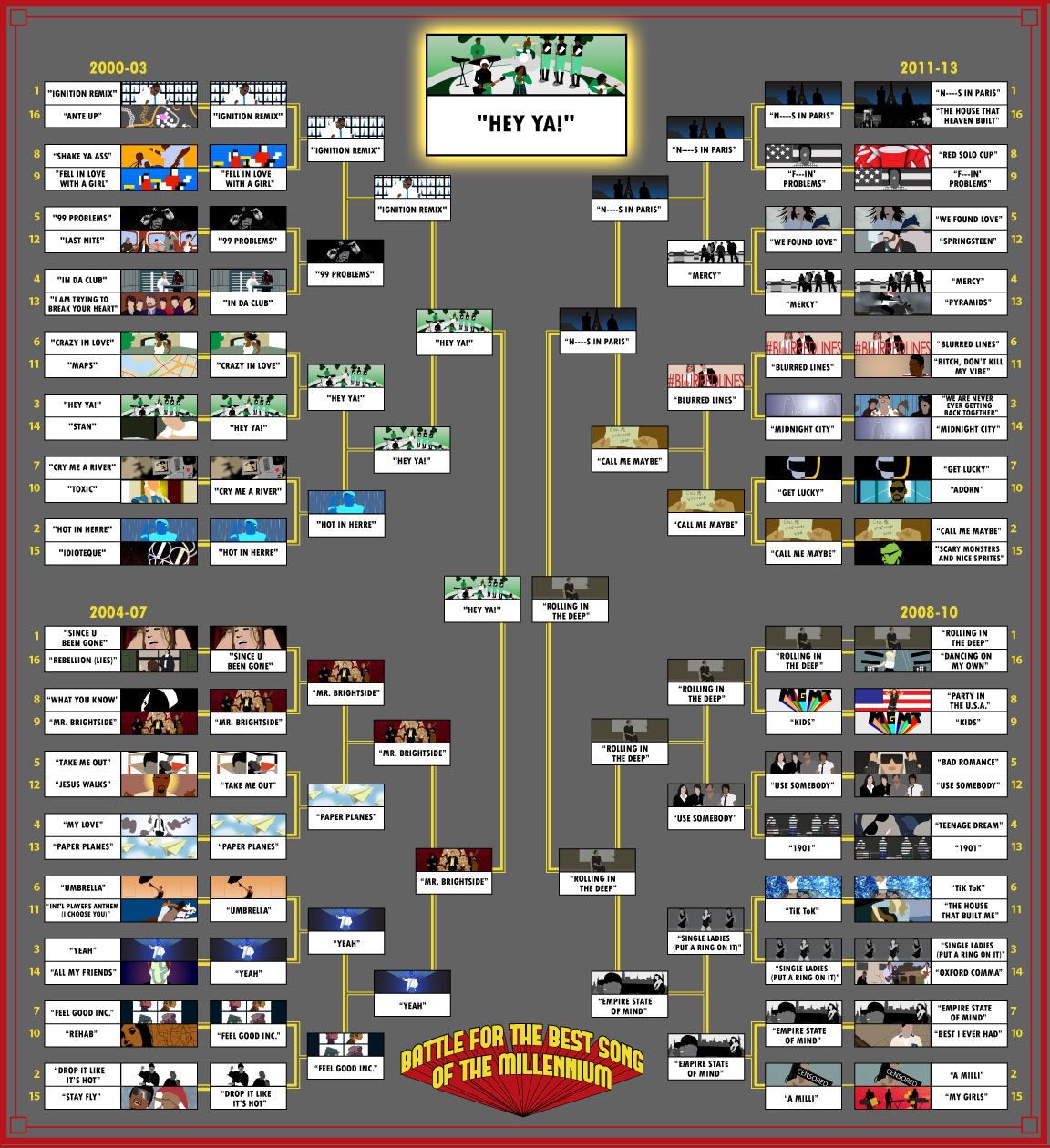 If you’ve been reading these daily bracket recaps — since you’re reading this one, I’ll assume you have — you probably picked up on a recurring formula. Typically, the author compliments the voters when their votes correspond with the author’s personal taste, and admonishes them when they don’t. As we’ve gotten closer to the end, the admonishing has gotten louder and more forceful. Well, now that we have a winner, I won’t be wagging any fingers at the electorate. Because I’ve been tasked with attending to the healing process, and also because I think you guys got this one absolutely right. “Rolling in the Deep” and “Hey Ya!” absolutely deserved to be the last ones standing, and “Hey Ya!” deserved to win. This is true because this is what ended up happening. This bracket was set up to determine the people’s choice, and the people have spoken, and the people cannot be wrong.

Much of the conversation about this bracket — and there was a lot of conversation, thank you very much for that — seemed to be rooted in a fundamental misunderstanding of what the word “best” is supposed to mean in this context. “Best” was commonly misconstrued to be synonymous with “favorite” or most personally relevant, as in “‘Sk8er Boi’ is obviously the best song of the millennium because it instantly reminds me of what it felt like to be in the eighth grade.” This definition of “best” inherently resists consensus, because it exists in a vacuum. You can’t “prove” it, because it’s based solely on your own experience. It’s like arguing over whose mother makes the best meatloaf.

Now, I can only speculate on what the intentions of the bracket-makers were, since as a non-Angeleno Grantland person I had zero access to the back room where this thing was hacked out. For all I know, it was Olivia Pope, Hollis Doyle, Cyrus Beene, and the First Lady of the United States who conspired to drive our readers bonkers for a week. (I’m loading up on “jokey Scandal references” stock early.) But from what I can tell, “best” was really supposed to mean “most significant,” as in these are the songs that meant the most to the most number of people. This version of “best” actually can be proven, even if the “right” answer often doesn’t seem satisfactory. It reminds me of a conversation I had once with this dude sitting next to me at a Dirty Projectors concert. He asserted that the Beatles were overrated, because he personally found the group’s output to be underwhelming. “You have every right to not like the Beatles,” I countered. “But you personally not liking the Beatles does not negate the impact they had on the culture. The Beatles are not overrated. You just happen to hold an unpopular opinion.”

Of course, even the bracket-makers occasionally confused “favorite” for “significant.” There have been lots of complaints about great, transcendent songs that weren’t even put up for a public vote: “Crazy,” “Lose Yourself,” and “Seven Nation Army” are so ingrained in the culture that I don’t have to tell you who performs them. (Apologies to Chris Ryan and M.O.P., but perhaps “Ante Up” could’ve been saved for a follow-up NIT-style song tournament.) Given how much weight the song pickers gave to pop music, I’m also mildly surprised that Christina Aguilera’s “Beautiful” didn’t make the cut. There was a period in the early ’00s when it was considered the pinnacle of contemporary pop songwriting. (Even Axl Rose covered it during Guns N’ Roses concerts at that time.) And while I’m not personally a fan, Mumford & Sons are as big as any act of the last three years, and “I Will Wait” likely would’ve lasted at least a round or two. I also suspect that if Grantland were based in, say, Tulsa, instead of L.A., one of the multiple Rihanna or Beyoncé songs chosen for the bracket would’ve been swapped out for the inescapable 2013 summer song of small-town America, Florida Georgia Line’s “Cruise.”

But all of that barely matters now. We got the right result. If you had asked me last week which two songs in the bracket had the broadest base of support, I would’ve said “Rolling in the Deep” and “Hey Ya!” It hardly takes a genius to make this observation. “Rolling in the Deep” is the most popular song from the biggest-selling album of the last several years. “Hey Ya!” is the most popular song from the most universally liked and respected rap group of the last two decades. It seems thunderously obvious that this is where we’d end up, almost to the point of rendering all the voting that got us here moot.

Still, this is the Internet, and we’re not exactly accustomed to thinking about music in this way anymore. It has been argued, on social media and elsewhere, that “Rolling in the Deep” and “Hey Ya!” aren’t even the best songs recorded by their respective artists. I’m sure there are Adele fans who feel a much deeper personal connection with “Someone Like You,” which was famous enough to inspire its own Saturday Night Live sketch. (Did I mention that Adele’s 21 is freaking huge?) And practically every OutKast partisan I know hates “Hey Ya!” and seemed personally offended that “B.O.B.” wasn’t in the bracket instead. (I might be mis-remembering this, but I recall “Ms. Jackson” being the big OutKast song in the culture during Stankonia’s album cycle. It was even briefly fashionable for fly-by-night rock bands like the Vines to play it live. Remember the Vines and the Strokes-alike wave of the early ’00s? Neither did this bracket.)

These arguments are interesting and have more than a little truth to them. They’re also irrelevant. “Rolling in the Deep” and “Hey Ya!” were the right songs precisely because they don’t appeal just to the fans. They appeal to everybody. You might think you hate one or both of these songs, but you probably had to decide to hate them, and it likely had something to do with the fact that everybody else thinks they’re awesome. That’s on you, not Adele or OutKast.

Around the time that the bracket was whittled down to the final four, someone on Twitter predicted that the final matchup would be between “Rolling in the Deep” and “Hey Ya!,” and that it would be the “battle of white people wedding songs.” This is the sort of (dumb) reductionist statement that people frequently make on the Internet, because the Internet is the place where (dumb) people who are overly concerned with appearing cool or smart go to construct a false perception of themselves. Describing a piece of music as a “wedding song” (or a “white people wedding song,” which I guess is intended to be another layer of margarine on a dork sandwich) is meant to be a put-down when in fact it’s the highest compliment there is. Who attends weddings? A cross-section of every age, religion, socioeconomic background and, yes, race. (Every wedding I’ve ever attended has strictly been a “people wedding.”) And what gets played at weddings? Only the songs that all the individuals in attendance can agree on. That means ’60s Motown, ’70s funk, ’80s one-hit wonders, and late ’80s/early ’90s rap. (If we ever do a best songs of the ’90s bracket, I’m calling “Regulate” in a surprise victory over “Smells Like Teen Spirit,” based solely on my personal wedding-reception experience.)

When I got married five years ago, my wedding reception felt like one of those surreal dreams where your best friend from grade school is suddenly your boss at your first job out of college. People from every section of your life are assembled in one place and now they’re drinking and laughing together. It’s an occasion that calls on the ability of pop music to unite people, and no songs have united more people this century than “Rolling in the Deep” and “Hey Ya!” You don’t have to make a case for those songs being as good as “I Heard It Through the Grapevine” or “Stayin’ Alive” or “Bust a Move” — it’s a fact that they all wind up on the same playlists tens of thousands of times around the world every year. I know this is true because you said so with your votes. Frankly, as a person who writes about music for a living and sometimes wonders whether pop’s “mass appeal” period is long gone, I’m happy that songs still have that power.

So, no, I won’t scold you. I only have praises. You took what we gave you, warts and all, and did a great job. Even when we said you got it wrong, you were right all along. This, by the way, is my shout-out to “Mr. Brightside” backers: Don’t listen to my grumpy colleagues, pals. That song is awesome. If you put a gun to my head, I’d probably say “Since U Been Gone” is better. But it’s not that much better. Besides, aren’t we talking about two songs that derive from very similar sources? If “Mr. Brightside” is warmed-over Duran Duran, “Since U Been Gone” is warmed-over Patty Smyth. And they both taste delicious! So let’s just put our guns down, grab some champagne, do the funky chicken, and get over ourselves already. For once on the Internet, it wasn’t about me and it wasn’t about you. It was about us.

Filed Under: Best Song of the Millennium, Adele, Music, Outkast