B.J. Novak to Save Print Media 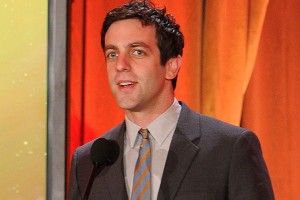 Or, in less histrionic terms, B.J. Novak got a book deal.

As the New York Times reports, Novak has signed a two-book deal with Knopf worth seven figures, with the first book — a collection of stories — due in 2014. NBD, though, cause it’s already been written. Says Novak’s agent Richard Abate, “The closest analogy for me is Woody Allen. Underneath these stories is a real intellectual curiosity. I think their appeal is that they’re incredibly accessible and comic, but at the same time they’re exploring the modern condition.” And if you’ve caught Novak live, you may have gotten yourself a sneak preview. THR says the stories will be adapted from “a series of live shows he performed at Upright Citizens Brigade.” They also point out that Novak’s deal gives a masculine spin to the recent trend of high-profile book projects from funny people, which includes Abate’s clients Mindy Kaling and Tina Fey, plus upcoming joints from Amy Poehler and Lena “The $3.5 Million Woman” Dunham.

Anyway, if you needed a good reason to learn/not forget how to read this morning, here you go.