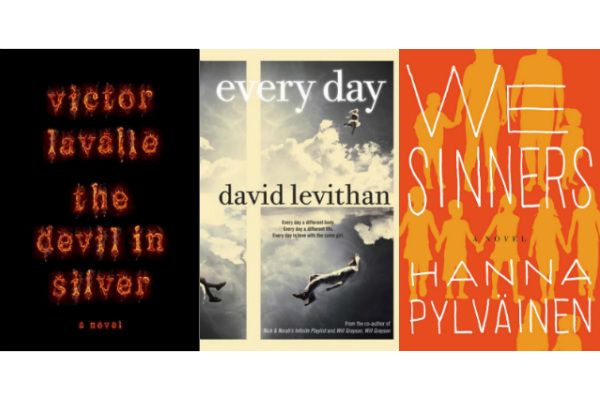 The Devil in Silver by Victor LaValle

For Pepper, what should be a 72-hour stay at the New Hyde Hospital’s psych ward turns into a prolonged, drug-induced incarceration. But as a troublemaker with a cynical edge, the mental institution gives Pepper the chance to confront his personal demons. And also a real demon. New Hyde, it turns out, is haunted by the devil.

The premise is silly, but The Devil in Silver is a smart, savvy piece of literary horror. It’s ambitious without being self-serious, and it’s also appropriately spooky when it wants to be. Victor LaValle became a critical darling with his last novel, Big Machine, which dealt with themes of race and class. The Devil in Silver follows suit, its characters the victims of a cruel and unsympathetic system.

LaValle isn’t subtle in his parallel between New Hyde and the forces of capitalism. This sort of impassioned criticism of America’s socioeconomic disparity might seem heavy-handed in a more “serious” piece of fiction, but LaValle’s monsters keep things from getting too didactic. For all the thematic lifting LaValle does, Silver is a lot of fun, comically violent, and plenty self-aware (“WELL, FUCK. The black guy did die first after all.”). The book is full of very crazy, surprisingly likable characters: a bipolar teen, a schizophrenic eightysomething, and an OCD paranoiac. (By design, the cast also shows a diversity of ethnicity and class.) The central hero, Pepper, is the most interesting of them, as both a hapless victim of bad luck and his own naiveté.

LaValle reveals the meaning of the title mid-way through the novel with an anecdote about the history of silver mining in the U.S. In the 1850s, the high mortality rate of miners led people to believe that there was “a devil in the silver.” One character explains, “it wasn’t a monster that was killing them. It was the mine.”

LaValle has crafted a clever lesson on what’s scary. We demonize individuals when it’s the system that we should be terrified of. Fear not the killer, but the environment that bred him.

TLDR: A literary monster romp that occasionally considers what it means to have a black president.

Every Day by David Levithan

The smartest thing I’ve ever heard about adolescence came from young adult novelist John Green, who explained that “teenagers are selfish because they are so busy trying to figure out who they are, they don’t have time to think about the people around them.” It’s why all great young adult literature — whether it’s set in a world that’s real, dystopian, or fantastical — deals with identity and responsibility.

Every Day takes those themes head-on by changing its narrator’s identity with each chapter. Every morning, “A” wakes up in a different body. He doesn’t know why, but he’s always someone new. He also feels an obligation to live the lives of others as selflessly as possible, even if that means ignoring the things that he wants. Surprisingly, it’s a more of a freeing experience than it is a constricting one. “I am a drifter, and as lonely as that can be, it is also a remarkable feeling,” A says. “I will never define myself in terms of anyone else. I will never feel the pressure of peers or the burden of parental expectations.”

Author David Levithan (who, among other credentials, co-wrote Will Grayson, Will Grayson with John Green) grounds the outlandishness of the book’s concept with believable details. (For example, A organizes his life by email, since it’s something he can access regardless of the body he’s in.) But this is a young adult novel, so naturally things are complicated when A falls in love. The object of his affection is a sweet, sorta-alt girl named Rhiannon. They meet when A inhabits the body of her shitty boyfriend. Suddenly, his detachment from his own desires are compromised by an unconditional love for Rhiannon. Then there’s the tricky process of convincing Rhiannon that, despite his ever-changing appearance, A is the same person day after day.

At first, I thought the love story felt a bit shoehorned. There’s not much in the way of convincing the reader why A is so smitten with Rhiannon, but it all ties together in the book’s heartbreaking conclusion — one of the most satisfying endings I’ve read all year. I won’t give it away, but the lesson is a slight but important tweak on what Green said: teenagers aren’t necessarily selfish; they just haven’t yet learned what it means to care for someone else.

We Sinners by Hanna Pylväinen

In contrast to Every Day, We Sinners has an extremely divisive ending. But let’s talk about the good stuff in Hanna Pylväinen’s debut first.

In rural Michigan, the Rovaniemi family belongs to a harshly conservative Finnish sect called Laestadianism, “a kind of Lutheranism where everyone is much more hung up on being Lutheran than all the other normal Lutherans.” Each chapter follows a different Rovaniemi (there are a lot of them — two parents and nine kids) and what unfolds over a slim 189 pages is an elegant, affecting story about temptation, forgiveness, and family.

We Sinners is dense, but Pylväinen moves swiftly, weaving together a lot of clever, tricky things. Most impressive is how well the multiple perspectives become a portrait of the family’s matriarch, Prijo, who embodies the books central dilemma: how faith can bring her children together and drive them apart at the same time. The boyfriend of the Rovaniemi daughters sums it up best: “You know the best thing about the church is your family, and the worst thing about your family is the church.”

I can’t in good conscience recommend We Sinners without giving a brief warning about the ending. The last chapter is really strange, shifting from realism to what resembles a tripped-out dream sequence. If you’re the kind of reader who prefers their endings messy and ambiguous to “happily ever after,” you’ll find a lot to like. What We Sinners lacks in resolution, it makes up for in resonance. I can’t say I understood the ending entirely, but it certainly stayed with me.

As soon as I finished We Sinners, I texted my friend Caley, who had also read an advanced copy.

KEVIN: Ok. The ending of We Sinners. Like. Ok.

CALEY: Can you explain it to me

KEVIN: It’s weird. It jumps to an allegorical story about that weird religion, and suddenly Brita is there.

CALEY: Yes. I don’t get its purpose

CALEY: I love the rest of the book and that structure. Which makes the ending so frustrating

KEVIN: It’s interesting. I haven’t made up my mind about the ending yet

CALEY: I want to know what her intention was

KEVIN: I feel like I need to read it again

CALEY: I agree. I’ve been thinking about it a lot since I finished. My head was full.

TLDR: Jon & Kate Plus 9 Plus Thoughtful Meditation on Faith and Family

How Did Peter Jackson's Third Hobbit Movie Come Together So Quickly?