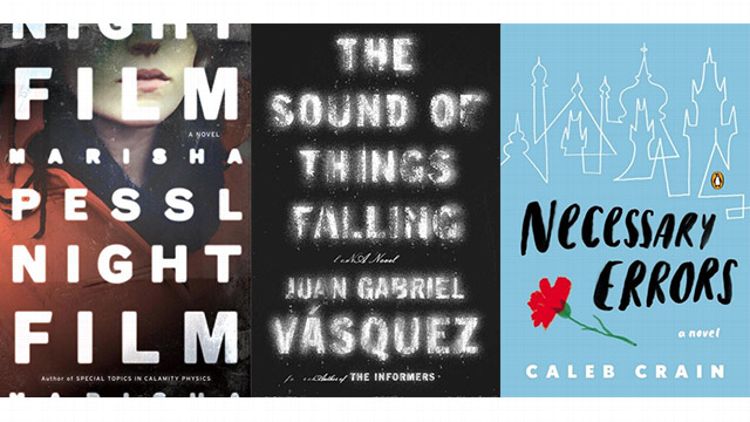 Ashley, the 24-year-old daughter of cult horror director Stanislas Cordova, is found dead in a warehouse in Manhattan. (I don’t know my cult horror directors very well, but I kept imagining Dario and Asia Argento.) When the police rule the death a suicide, investigative journalist Scott McGrath takes it upon himself to prove that there were sinister forces surrounding Ashley’s passing. The catch is that McGrath was famously disgraced after losing a million-dollar slander lawsuit against the Cordova family. McGrath has a chip on his shoulder, and a mystery to solve.

What follows is a twisty literary thriller that sinks into the underworld of obsessive Cordova fans. The director has always been a recluse (albeit for one Rolling Stone interview), and most of his films are impossible to track down. Even the actors in Cordova’s disturbing pictures are unwilling to talk about the director. As McGrath discovers, many of Cordova’s secrets can be uncovered on the Blackboards, a hyper-secret message board for Cordova fanatics, which touts “that to be terrified, to be scared out of your skin, was the beginning of freedom, of opening your eyes to what was graphic and dark and gorgeous about life, thereby conquering the monsters of your mind.”

For a book about terror, Night Film never seems to take itself too seriously. Most thrillers feature a protagonist who has an uncanny knack for solving crime. McGrath is actually kind of clumsy — supposedly he is rusty since the lawsuit — but this gives the novel a bit of levity. There’s nothing hard-boiled here. McGrath bumbles through a lot of the investigation with two amateur partners, a coat-check girl and a wannabe punk, as they circle closer and closer to understanding Ashley’s death. It may seem inconsistent, the way Night Film bounces back and forth from dark places to moments of such lightness, but it speaks to Marisha Pessl’s careful ear for language and meticulous plotting that this never feels like a tonal disparity.

I could have done without the Goon Squad–style mixed media (in places Pessl has inserted fake website screenshots, newspaper clippings, photographs, etc.), which are more distracting than interesting, but the clues are finely placed and Pessl’s hints at curses and black magic give the mystery a haunted ambience. Night Film is a creepy genre-bender with a satisfying, tidy ending.

The Sound of Things Falling by Juan Gabriel Vasquez

Post-traumatic stress is often triggered by the senses. The Sound of Things Falling is a novel about those triggers and the painful memories they conjure. As the title suggests, many of the things that set off the novel’s protagonist, Antonio Yammara, a young law professor in Bogota, are evoked by sounds: bullet fire, the sound of his pregnant wife crying, and, most hauntingly, the sound of an airplane black box, its pilots screaming “Up, up, up!” before a horrific crash. (“It’s the sound of things falling from on high, an interrupted and somehow also eternal sound, a sound that didn’t ever end, that kept ringing in my head from that very afternoon and still shows no sign of wanting to leave, that is forever suspended in my memory, hanging in it like a towel on a hook.”)

In ’90s Colombia, the U.S.’s hunger for cocaine fueled a drug economy that would allow drug lords and cartels to assume power of the country. The beginning of the novel deals with Antonio’s friendship with a shady pilot he meets at a billiards hall named Laverde, whose presence is suspicious; his death is even more so. In his search to discover the truth about Laverde’s past, Antonio struggles to cope with the pervasive violence in Colombia — both commonplace and yet deeply disturbing.

Antonio is reflecting on these events years later, but as he comes to realize, the human mind has a way of distorting or misunderstanding the past. Sometimes it’s because the truth was withheld (Laverde’s daughter Maya never learned the true circumstances around her father’s death) while other times it’s simply because those memories are too painful (Antonio laments, “Disillusion comes sooner or later but it always comes, it doesn’t miss an appointment, it never has.”).

It’s not a long novel, but The Sound of Things Falling manages to unpack so much in so few pages. It’s a rich and sympathetic history of Colombia’s darkest era, a critical look at the U.S.’s hegemonic relationship to peripheral countries, but most of all, a beautifully crafted meditation on the meaning of friendship, family, and love.

In 2007, I was studying abroad in Prague. Traveling while in school is its own insular, somewhat disingenuous experience (rightly parodied by this Onion piece), but it can still have a profound effect on a person. To be away from home — far away, for longer than you’ve ever been away — is liberating.

Reading Caleb Crain’s debut, Necessary Errors, made me nostalgic for my time in Prague, even though it’s set in the Czech capital 17 years before I was there. Czechoslovakia has just been democratized the previous year, and its citizens are still discovering what their new freedoms mean. Jacob, an American expat and aspiring writer, is experiencing a similar newfound freedom after having recently come out. It’s an obvious but effective parallel, as both Jacob and his expat friends struggle to understand how all of these changes — sudden and not-so-sudden — will affect their lives.

Crain eschews a narrative arc for a meandering tale of self-discovery and a lovely sense of time and place. I recognized the language, literature, and locations — from the tram stops to the ’80s dance club Lucerna (fun fact: It was designed and owned by Vaclav Havel’s family). That sense of nostalgia pulled me through the first 100 pages of this book, which moves at a snail’s pace. But this debut is the sort of book that demands to be settled into. (Or, more accurately, asks you politely to be patient with.) And it makes sense that a novel about self-discovery takes the winding road.

In a lot of ways, Jacob is constantly afraid that he might be doing the wrong thing. At one point, he struggles with whether even exploring his newly recognized sexuality is actually what should be important to him: “The possibility of sex was still so new in [Jacob’s] life that it seemed plausible he could simply set it aside — not hide his nature from himself but refrain from doing anything about it, much as he was planning to refrain, for as long as he remained abroad, from any serious professional ambition.” But as one character says later in the book, “It’s regret that ties up the loose ends, that makes it a story.” (This is in response to a piece of fiction Jacob has written, but everything in this novel has a parallel meaning.)

In some ways, I’m recommending this book based on a sentimental attachment I have to its setting. Necessary Errors suffers from a lot of debut novel trappings — it’s perhaps stronger at a line level than a whole, maybe overly earnest — but in spite of its flaws, I found myself getting a little too close to it. There’s so much to like here that you’ll want to take it slow.

TL;DR: Henry James, but gay and in ’90s Czechoslovakia.