Attention: Fiona Apple’s The Idler Wheel Exists in the World, Like, Right Now 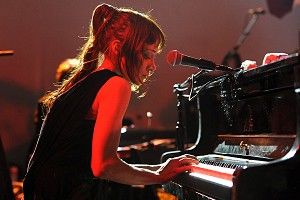 It’s not officially out until June 19, but Fiona Apple’s The Idler Wheel Is Wiser Than the Driver of the Screw and Whipping Cords Will Serve You More Than Ropes Will Ever Do is available for you, to listen to in full, right now, via NPR. It’s her first album since 2005’s repeatedly delayed, label-plagued Extraordinary Machine, and in that seven years the legend of Fiona has only propagated, thanks in part to another major label hubbub: As Apple explained from the stage of L.A.’s Largo in November, “I can’t remember [how to play] any of my new songs because they’ve been done for a fucking year.”

The New York Times reported in May that Apple “was delaying it until her label, Epic Records, found a new president. She … didn’t want her work to be mishandled amid corporate disarray. And she was in deep personal turmoil. ‘I just spiraled downward, and everything looked bad,’ she said.” And while all the label delay chatter is behind us now, Apple doesn’t sound like she’s quite free of turmoil. In this candid, hilarious Pitchfork interview, Fiona shares all kind of personal details about her state of mind:

“I’d say that I’ve been reclusive the last 34 years … to this day, if I go to Largo — which is a very comfortable place for me — I tell my brother, ‘I have show stomach,’ which feels like the flu. Anytime I go out, it is just something to deal with, even walking to the grocery store. If I’m supposed to go from one place to another place that isn’t that comfortable, I usually don’t go … I still don’t know how to drive. I don’t go anywhere, really, except for Largo. My brother drives me. I walk around my neighborhood but I don’t go anywhere, nor do I want to.”

FA: I’m very happy that I don’t get embarrassed onstage as much anymore. But I do in real life, a lot.

Pitchfork: What do you get embarrassed about?

FA: Oh, everything I do and say, really.

And one last one, which really is crucial just because it provides a nice visual image of Fiona Apple accosting street drunkards:

Pitchfork: What about the sound of children screaming on “Werewolf” — it seems to come out of nowhere.

FA: I wrote that song while staying at my mother’s apartment up in Harlem. Whenever there’s a TV, I put on [Turner Classic Movies] — I always have it on, while I sleep, whatever. I was recording myself doing the song for the first time, and a battle broke out in the movie that was playing. People were shooting and screaming. I liked it, but I couldn’t use it from the movie, so I spent literally the next year trying to recreate that sound. I went to San Francisco for Halloween and I was hanging out in trollies recording people screaming. I would walk past a bunch of drunk people and be like: ‘Hey, scream!’ But it would always sound wrong and stupid.”

Anyway, back to the point. The album is done, and it’s out. Seriously, check it out.