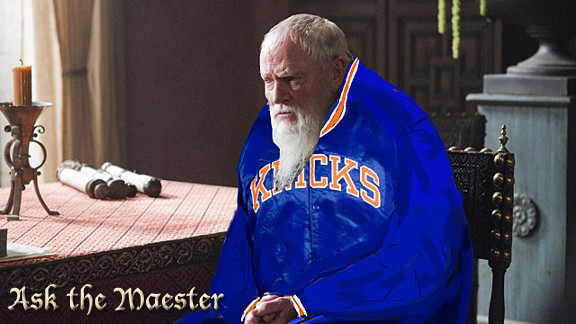 If you’re like us, each Game of Thrones episode will generate nearly as many questions as answers, especially of the “Who is that guy again?” or “Wait, what just happened right there?” variety. So the Grantland staff compiled a list of such lingering queries and posed them to Maester netw3rk, our in-house Throne whisperer, to get some closure along with the season finale. And just in case you’re worried, they’re not future spoilers. We’d never do that to you. Here, have this bowl of bread and salt.

Oh, seven hells, yes. With the Starks either dead (Ned, Robb, Cat), presumed dead (Bran, Rickon, Arya), or not true-born/bound by oath not to procreate (Jon), Sansa’s children would have a legitimate claim to the North. See, the Starks are as OG as it gets in Westeros; they’re the descendants of the First Men — the first human inhabitants of the continent of Westeros — and have ruled the North since the time of the building of the Wall. In fact, a Stark, Bran the Builder, built the Wall. That’s something like 8,000 years. So, basically, for all of history, the people of the North have been ruled by Starks. By comparison, House Lannister is between 4,000 and 6,000 years old (descended from the Andals, the second wave of human invaders of Westeros), while House Tyrell is in its infancy, owing its position to the largesse of Aegon the Conqueror, a span of just under 300 years. Seeing as how the North is (1) huge, (2) unassailable from the south by land, and (3) impossible to hold because of the years-long winters, Sansa offers the best route for a non-Stark entity to pacify the North.

Yeah, how does the Red Wedding affect her marriage to Tyrion?

It gives Tyrion and Sansa’s (potential) children legitimate claim to the North (remember, Arya, Bran, and Rickon are thought dead). How Machiavellian is Tywin Lannister? In one fell swoop, he eliminated a dangerous battlefield opponent while putting Winterfell and the North in play for his house. All that AND Walder Frey takes the public relations fallout for violating the guest right. That’s a chess move, kids.

There may be an obvious answer to this, but where exactly did Daenerys’s dinosaur eggs actually come from; in other words, a dragon laid them?

So I was just perusing the “Known Bastards” section for Robert Baratheon on A Wiki of Ice and Fire when it hit me that the whole basis for Gendry’s importance as a character is suspect. I mean, whatever age you assume Robert was when he died, there’s no way Gendry was born before he was 22 or 23, right? And come on. Robert was DEFINITELY getting his Belching Sex King on with the serving girls before then, even if he wasn’t technically king yet. So I guess what I’m asking is, why should we believe that Gendry is the oldest male Baratheon bastard? Couldn’t he have like 12 older brothers herding goats in the Vale/tearing up pubs in Gulltown?

Answers to your burning Game of Thrones questions.
Of course, Robert could have been siring bastards for a while before Gendry. The importance of Gendry is that he is a KNOWN bastard of Robert Baratheon in a world where there are no driver’s licenses or DNA tests. All you would have to go on to find those other Baratheon bastards is “brown hair and blue eyes.” Good luck with that. Gendry’s importance as a character is twofold and admittedly a little opaque. If we’re talking about his importance in regard to the Lannisters and their bastard purge, Gendry is important because he’s Robert’s oldest known male bastard progeny. If Joffrey’s incestuous parentage ever came to light, Gendry would have a decent claim to the throne. Not Stannis good, but good enough to cause trouble. So, obviously, from Joffrey’s perspective, dude has to go. If we’re talking about why Melisandre considers Gendry important, it’s because some of the spells she uses are dependent on blood from a king, which he has. Imagine how else Melisandre might obtain the blood of a king. Kings and their official offspring are hard targets, living in castles, surrounded by knights and assorted guards. Your best shot for obtaining king’s blood is unrecognized bastards, which brings us back to the problem of identification. Westeros is full of assorted orphans and waifs of unknown lineage. Finding Gendry is like finding a bastard in a haystack of bastards.

I could really do with just a comprehensive capsule Theon review. Where in the hell is he? Who’s got him? What do they even want from him? How are his female torturers getting wax jobs?

I don’t know how much of this question I can answer without spoiling some aspects of the story. That being said, in regard to Westerosi grooming habits, one thing Westeros is not in short supply of is razor-sharp cutting implements.

WHAT did Varys do with that Sorcerer in a Box???

I assume he’s returning the blood-magic-junk amputation favor, with much relish and as painfully as possible.

Are the Dothraki Asian?

Interesting question. Martin describes them in the books as having “almond-shaped eyes” and “copper skin.” Plus the parallels to real-life historical eastern-steppe horse warriors like the Huns and Mongols are pretty obvious. So, I would say yes.

I know they’ve kind of parted ways with them, but who exactly are/were the wildling lady with a heart of gold and Hodor? I don’t really remember how or why they became the official protectors of Bran and The Other Son That Wasn’t In The Show Until He Was.

Osha is a wildling who was fleeing south from the inevitable rise of the Others. The Starks showed her kindness and she took something of a motherly shine to Bran. Hodor was a Winterfell stable boy and great-grandson of Winterfell fixture Old Nan, a.k.a. the old lady from Season 1 who told Bran that scary story about the Others. I guess you could say Osha and Hodor are kind of protectors of convenience.

I’ve heard some ugly fucking rumors about Book 4. How worried should we be for next season?

Unworried. Season 3 covers roughly the first half of book three, while Season 4 will cover the second half. This means that, in terms of source material, Season 4 should be positively crackerjack. I have my problems with Book 4, but, considering the way the showrunners have, in my opinion, focused the core narrative, I suspect the show will improve on the book. But that’s a ways off and a discussion for another day.

Dear Maester,
Was there some kind of contingency plan if Robb Stark had refused to marry Edmure off to a Frey girl? Like, did the Freys and Lannisters have a fallback if the wedding hadn’t gone off?

The plan was always to lure Robb and his men to the Twins. The wedding was just the means. Seeing as how this is Tywin Lannister we’re talking about, we can assume there were contingencies in place. Robb’s plan, such that it was, for ending the war was to go a-pillaging into the western Lannister heartland and lay siege to the Lannister seat of Casterly Rock. But when Robb spurned the Freys’ marriage offer, Walder Frey pulled his men out of Robb’s army. This is on top of the men Robb lost when he lopped off Lord Rickard Karstark’s head. Robb needs troops if he wants to take Casterly Rock, making a reconciliation with the Freys of paramount importance. Walder Frey had the leverage; Robb was always going to the Twins.

Shouldn’t Jon Snow be King in the North now? Or are bastard bloodlines diluted? And if that’s the case, why is Melisandre so hot for Gendry? Does King go straight to Brann?

Succession is a legal question and children born in official marriages to two people of royal blood carry the most weight when it comes to hereditary claims. This is to ensure stability throughout the realm. Bastards cannot inherit lands and titles unless officially recognized as being part of a particular house by either the current lord of that house or the king. Thing is, the legitimizing of bastards in Westerosian history often has unintended and violent consequences. Back in the Targaryen days, a whole slew of Targaryen bastards were legitimized by the king, creating a succession crisis that exploded into a full-blown civil war called The Blackfyre Rebellion.

As things stand currently, with Robb and his unborn child dead, Bran/Rickon considered dead, and Jon unrecognized as an official Stark (plus bound by oath to never inherit lands and titles), the position of king in the North no longer exists. Jon could still be legitimized by royal decree, i.e., King Joffrey declaring that Jon is an official Stark, and therefore heir to Winterfell. But Joffrey isn’t going to be legitimizing Jon because Tywin is not about to give up the very real possibility of Lannister rule over the North via the Tyrion-Sansa union. So, yes, Bran is, legally speaking, the current king in the North and lord of Winterfell, with Rickon as his heir. This makes Bran and Rickon very, very marked boys should their state of not being dead become common knowledge.

Melisandre is after Gendry for the blood flowing through his veins, not the legality of his claim to the iron throne.

What’s the status of the Night’s Watch now? Did the dudes who mutinied against Mormont break their Watch vows altogether, or just ditch him and decide to cover up the murder and go back to their lives as watchmen like nothing ever happened? How is Sam still able to go back to Castle Black? Is the Night’s Watch still even a thing?

The Watch is still a thing, though — especially in the case of Castle Black — a decidedly weakened thing. Commander Mormont went North with the best fighters at his disposal, but someone had to stay behind and tend the ravens, keep the smithy running, and make the food for everyone. So, while we may be talking about glorified janitors and cafeteria workers in some cases, those guys take their vows just like everyone else. And that’s just Castle Black; remember, Jon told the Wall-climbing Wildling raiders he was undercover with that three of the 19 castles along the wall were manned. So there are two castles of Night’s Watch bros out there who we haven’t seen yet.

The men of the Watch who went all Lord of the Flies in Craster’s dining room didn’t really do too much thinking it through aside from “Yo, where’s the food at?” Laws don’t really exist up in Wildling country — it’s basically The Purge 24/7 style up there — no need to cover up the slaughter. I don’t think they’ll be coming south of the Wall, where they might have to answer for their crimes, unless it’s as refugees from the Others. If they survive, that is.

Sam should have no problem getting back to Castle Black. The hard part was really getting on the right side of the wall. As a student of the Watch’s history, he’d know exactly which castle’s well he just came out of, and where on the Wall it was located. After that, it’s just a simple matter of keeping the Wall on your left and walking until you get to Castle Black.

How awesome are direwolves?

Pretty fucking awesome. In the books, they cause entire armies to wet their pants and, in general, go about disemboweling anyone who messes with their owners. They also have a good sense of when shit is about to hit the fan. Pro tip: If your direwolf seems agitated, pay attention; THAT’S A BIG DEAL.