Down Goes Chu! Arthur Chu, the ‘Jeopardy!’ Champion Crafty Enough to Be Reviled, Has Finally Lost 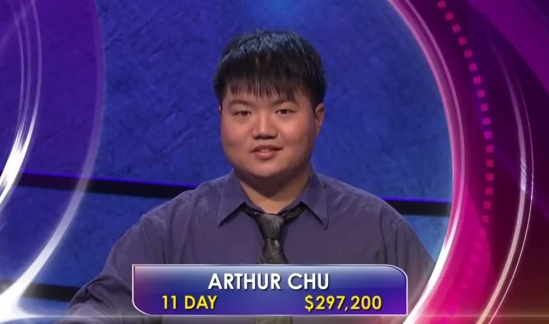 Wednesday night’s episode of Jeopardy! was Arthur Chu’s chance to tack one more win on to his 11-game streak. The champion started out shaky, newcomers Julie and Diana disrupting his commanding, buzzer-mashing style. Things continued falling apart in Double Jeopardy, and suddenly Arthur, the show’s self-described Richard Hatch, was finished. (And Diana’s win was really sweet!)

Chu — a 30-year-old Ohio native whose nontraditional category-hopping, Daily Double–hunting strategy for some reason prompted viewers to skewer him as a game-show villain — left with $297,200 and a $1,000 third-place prize, the third-highest winner’s total in Jeopardy! history. He doesn’t have concrete plans for the money, although on the list of ideas are a charitable donation (something fibromyalgia-oriented) and a trip to see relatives in China. In the near-decade since Ken Jennings’s record-setting $2.52 million haul, Chu is the second winner to hit double digits in terms of consecutive games won. (Dave Madden won 19 consecutive games in 2005, to Jennings’s 74 in 2004, and took home $430,400.) “I don’t know how Ken Jennings was so consistent,” Chu told the Cleveland Plain Dealer. “I think he’s just a mutant.” (Now’s as good a time as any to note that Jeopardy! tapes multiple consecutive episodes each day; Chu’s entire streak was filmed over the course of three days back in November.)

Chu will do a Reddit AMA on Thursday night, calling it “the 1st time I get to talk about ‪[Jeopardy!] completely freely with no gag order.” Till then, relive the magic in 30 seconds, courtesy of his YouTube channel, which features all his episodes in full: