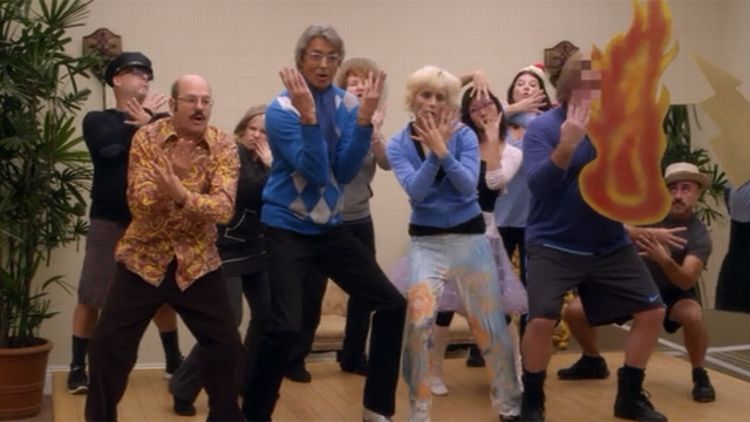 I think before this whole experiment in synchronized storytelling started, I would have said that Tobias was an ancillary character, that he was the source of the series’ least-subtle jokes, and the most thinly sketched. But as Season 4 has twisted around and into itself, piling on story lines and coincidences, the Tobias episodes are the lightest in tone (despite the darkness of some of the subject matter), the least freighted with backstory — and the ones I find myself invested in. I want Tobias to succeed! I want him to get the girl, pull off the musical production, and not go back to prison!

My sympathies have to find somewhere to land, what with most of the Bluth family careering about the limited frame, propelled mostly by greed and always cushioned by overweening self-regard. Even Michael, the series’ longtime straight man and moral center, has drifted id-ward.

But by the end of “Smashed,” Tobias also performs (hammily) out of pure self-interest; much like Lindsay, he comes to be a Bluth because he acts like one, not because he was born one.

Two technical-ish notes before we dive in. First of all, you guys who suggested watching with subtitles, you are the best! I finally did that and found at least one Easter Ann — I mean Egg. Second: I’m hoping that as we hit the downward stretch of the season, the episodes will get less convoluted, time-jump-wise. “Smashed” was fairly linear. I’m guessing that as the backstories get told, the show can focus on the present. Staying in the Cinqo is less taxing on my deteriorating short-term memory … but I think drawing all the plot threads together in real time is more of a burden on the show’s creative team. “Smashed” is the second episode in a row where the denouement arrives like a clown car, overstuffed with both characters and jokes, tooting its own horn.

But before that happens …

Tobias arrives at Austerity, the aptly named rehab center founded by Lucille Two. Having been arrested and apparently convicted for his foray into jail-baiting, he will serve as a staff therapist for his work-release program. (Had he taken the job Lucille Two originally offered him, he’d simply be working there, not releasing there.) He is giddy to find baby-faced pop star Mark Cherry there. Cherry, of course, hit his bottom back in the last Gob episode, or, as he recounts it: “There were bees — and drinking.” And there’s another would-be familiar face in treatment: Andy Richter’s quintuplet, Emmitt.

The narrator notes that Emmitt “wouldn’t allow us to show his face on camera,” so it’s blurred out, which is hilarious — we know what he looks like, he’s Andy Richter! — but also probably helpful to the series in that they probably didn’t have to have Andy Richter present for these scenes.

But these aren’t the only stars to have fallen into Tobias’s path. DeBrie also shows up; she and Mark C. checked in together: “She reminds me of my grandma, a real sick version.” Tobias swoons, but the romance between the two benighted souls is barely rekindled before Argyle Austero (Lucille’s brother, played by Tommy Tune) puts it out with a non-alcoholic beverage: “Sobriety is too important” to have their previous relationship interfere with treatment. Tobias can’t be her therapist. But when Argyle allows that he is sober only because of musical theater, Tobias becomes wistful and has a montage flashback of his previous work, set to the “Hot Cops” theme (“Just give us a squeeze/You know we’ll get down on our knees”). Not one to censor his thoughts, Tobias blurts out, “We could put on a musical!” Tobias will direct! Cherry will do the music! Patients will perform! The narrator explains that it’s a way for Tobias to stay close to DeBrie, though from the beginning Tobias seems to be reaching for the stars. As he said later: “This could be good for you. And this could be a huge hit.”

Obviously, first Tobias must return to Sudden Valley to pick up his car keys. There he has a not-at-all-contrived run-in with Gob. Over a breakfast of Parmesan and mustard, they discover they are both dating celebrities and that the lack of schools, libraries, Internet, or playgrounds in Sudden Valley makes the model homes a great, parole-compliant crash pad for Tobias.

Tobias then dives into the musical, which he promises will debut at Cinco de Quatro, on a boat. Argyle attempts to take on the choreography, but DeBrie is “brittle” and dances like a spastic goat. Her singing is no better. Tobias tries to protect her, asking Argyle to choreograph “baby steps” and lashing out at Mark Cherry, telling him he keeps writing the same “infantile, ridiculous melody over and over again … and I say that as your director. As your therapist, I’m happy you’re expressing yourself.”

DeBrie progresses, or rather doesn’t, as the musical kind of builds up around her, literally. “And with the evidence tag off the rock monster suit, the project was coming halfway to life.”

Tobias, in love with his fantasy and maybe his girl, asks Argyle “the question no one was asking”: Could they really do this? Like, really put on a show? “To do a Broadway-level production of the eight minutes we have now? $700,000.” Tobias lets out a low whistle in appreciation — of the amount and also of the fact that he can, in fact, whistle. “Oh, we have to put that in the show!” (A flash of the earnest wonderment that is the core of Tobias’s character and comedy.)

Argyle thinks that his sister could put up the money, but she’ll want to know they have the rights. They do not have the rights. Tobias swears he will get the rights, currently held by “Imagine Generic, a division set up to extend the rights to films studios weren’t prepared to make yet.” For his part, Argyle will set up a dinner with Lucille Two at the Balboa Club.

The Austero dinner coincides with the Bluth/Alley/Funke/Love affair of the previous Michael and Lindsay episodes. Michael tries to salvage the evening by getting together with George Michael, but his son has more pressing matters to attend to, telling his dad over the phone: “It’s like you always say, family first, unless it’s a work thing.” (Fakeblock is an app now, by the way, though I wonder if it’s also a scheme for getting out of unpleasant appointments.)

Michael runs into the Austeros as he leaves. They remind him that he owes Lucille, conveniently enough, $700,000 and they need it before Cinco de Quatro: “If you don’t pay up by the fourth, you’re going to be washing up with the rest of the broken piñatas on the fifth.”

Tobias has his own hell to pay: As long as he doesn’t have the musical rights, they can’t practice. So he can’t see DeBrie and must return to analraping. And as a therapist, he’s been assigned a new patient, “the C-word from the B ward,” none other than Lucille Bluth.

Despondent, he returns to Sudden Valley (like the swallows to Capistrano, really). He runs into Michael! Hey, you know what, Michael is dating a celebrity, much like Tobias! Michael confides his worries about the relationship to Tobias, after his slight hesitation provokes a pitiful aside — “it’s only what I do for a living, Michael.” Michael thinks he can’t do the Bluth movie and get the girl (remember, he thinks she’s Ron Howard’s mistress), even though he started the movie to get the girl.

Tobias is sanguine; he’s in a similar situation, after all: “We’re fucked.” Unless, of course, “some sort of miracle coincidence happens.” He advises that they walk away and “lick each other’s wounds.” Though when Michael says he has an actual meeting with Ron Howard, Tobias takes it back (“reverse psychology!”) and asks to come to the meeting. “Maybe I’ll do my gay character, I don’t think you’ve seen that one.” “Oh, I think I have.”

They meet with Howard for a “haircut meeting,” where Michael admits he doesn’t have the rights and awkwardly broaches the Rebel issue. There is some well-broadcast-ahead-of-time confusion when Ron starts talking about her in fatherly ways that could, if you didn’t know he was her father, take to be creepy ways. Michael is forced to admit he was confused on that very issue and Howard dismisses him: “You should know she’s dating someone else” — !!! — “and I’ll do everything in my power that she never dates you again.” He also dismisses Tobias’s plea for Fantastic Four rights: “I can’t do it, but … also I don’t want to.”

Tobias returns to the rehab center and decides to do the right thing and lie about the rights. The play has a new backer, too! Lucille One, whose presence is as undermining to DeBrie as it is undergirding to the show. She hovers and mocks DeBrie, whose costume now includes an ill-fitting blonde wig, much like Portia de Rossi wore in the early episodes.

At a low point but apparently high tide, DeBrie finds the pharmaceuticals that we saw Dr. Norman discarding in the last George Sr. episode: She “had been in the safe harbor of a drug-free zone,” only to find “herself a free-drug zone of an unsafe harbor.”

Meanwhile, Tobias passes off his Thing part to Buster — the narrator notes that “fate dealt Tobias a new hand” — and finds DeBrie wrecked on pills. Lucille Two sees this and fires Tobias, which he optimistically interprets as “having until Monday to fix this.” He goes off to find a way to keep the show alive, “looking for any Sue Storm in the port.”

He winds up taking on the role and blueing himself. Almost invisible in the darkness, he gets on the wrong boat “not for the first time,” and instead of heading out to join the rest of the cast in blue, he finds himself with Marky Bark, who is about to cast a blow. Marky thinks Tobias is Lindsay (the blonde wig probably helps), but of course Lindsay is on the Herbert Love ship that Marky has vowed to sink. Tobias gamely offers, “I think this is going to make a big splash.”

Past-seasons stuff (I read the comments — please add your finds there!)

Present season (to the comments, nitpickers!):

Tommy Tune, Ron Howard, 30 Rock‘s Lonny Ross as an emissary from the Feinberg 4, brief shots of John Slattery and Richter (I think?).

Meta shit (that wasn’t mentioned above):

In Retrospect, Jim Carrey Isn't So Sure Starring in Kick-Ass 2 Was Such a Good Idea

The Kardashiad, Part 15: The Beverly Hills of Cancer