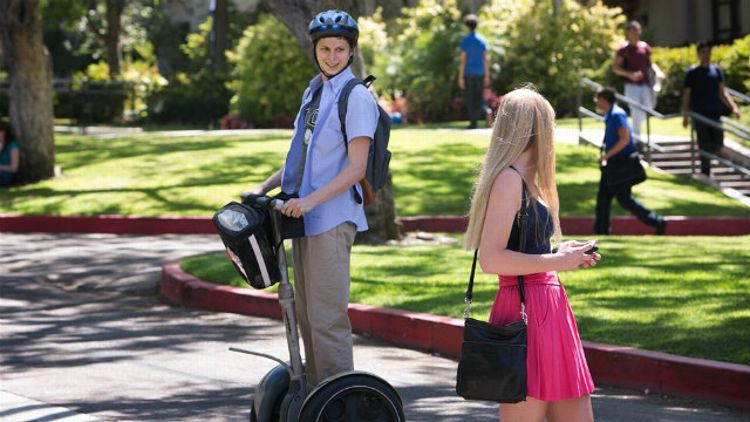 It’s all finally coming together, fellow slow-bingers, the pieces (Fakeblock, George Maharis, Maeby’s career) fall into place in George Michael’s “It Gets Better” episode. The Rube Goldbergian plot of Season 4 gains the sleek chassis it needs to glide smoothly over the finish line. “Sleek” and “smooth” are not, of course, adjectives one would normally associate with George Michael Bluth. And one still would not associate them with him, though by the end of the episode, he has gotten much better at lying.

Michael Cera continues to play George Michael with endearing and familiar awkwardness — an adolescent since the crib, really, and probably forever one. There’s a lot of talk in the entertainment world about Cera growing into other parts beyond Seth Rogen’s geekier shadow (even as played in the show, Rogen is somehow more believable as George Michael’s grandfather than Michael’s father); apparently, he’s going to be a bad guy. “It Gets Better” picks up the Opies plot thread, and there’s a weird meta-echo to the Cera hype in the multiple references to child actors struggling to remain relevant/attractive/believable as they age. (Steve Holt, anyone?) But George Michael’s development is just as arrested as any other Bluth, and thank god for that. The producers seem to recognize this; much of the George Michael humor still derives from seeing baby-faced Cera struggle to cope with inappropriately adult situations — or a porn star mustache.

George Michael will never be a bad guy … even though, of all the Bluth family members, it’s probably George Michael that pulls off the biggest fraud and has the most cringe-inducing motives: He’s the man behind a billion-dollar fake company invented because he wanted to get into his cousin’s pants.

Which brings us to our recapping.

We open with a scene familiar to anyone who lived through the ’90s on the West Coast: a pointless party to celebrate a company that may or may not exist. There is a lot of sucking up to George Michael, but when Rebel — last seen as the love interest of “George Maharis” — shows up, she wants to talk.

How did he get to this exalted position with this gorgeous girlfriend? To the series of nested flashbacks! First, to six months earlier, in which we see a relatively confident George Michael working out his woodblock chops with a band at UC Irvine. (His “amazing internal clock” is explained in another flashback.) The woodblock jam is for his Juilliard audition tape, though he acknowledges they would have to start a whole woodblock department if they did accept him — like I said, confident! How did he become this way, well, it started about five years ago …

George Michael is being feted by the family on the eve of his heading off to Irvine. Well, more like a “meeting” than a “fete.” As soon as his grandparents hand him a check, however, Michael shows up in the fit of pique seen in the “Flight of the Phoenix.” He has George Michael rip up the check and sends him off to college penniless and with a good explanation for us not seeing any supporting Bluth cast for the rest of the episode.

There is an interlude helpfully delineated by college years. Freshman: George Michael experiments with rebellion, sometimes having Pepsi in the morning and eggs at night. Sophomore: He dates, breaks up, gets a little better at foosball. Junior: Has the traumatic experience during a lab experiment that explains what an awful kisser he is.

It’s during his time abroad in Spain that things change: He has transgressive break-up (hers) sex with the mother of the family he’s nannying for (she asks him to “make me cry”; he tells her “you’re a terrible mother”).

Now “overtly sexual” and feeling his oats, George Michael returns to Irvine determined to really find himself, and where else would he look but in a block of wood?

When the band-assisted block-rocking doesn’t pan out, George Michael and P-Hound ponder the mysteries of solo woodblocking. Wouldn’t it be great if there were an electric woodblock? Maybe a woodblock app? George Michael grasps the potential immediately: “It’s basically like you would always have a woodblock with you.”

You can see where we’re going with this, down the Fakeblock way, but it’s an enjoyable ride, full of George Michael’s guileless enthusiasms and more guile-filled experiments in his Bluth-given facility for fabrication. Regarding the former, he bemoans the current woodblock apps: “Where are the mallet options? There’s no choice of wood weight or grain type!” As for the latter, well, it gets complicated.

First, when faced with the chance to meet up with Maeby (for whom he is still carrying a torch, and perhaps some wood), he slips into Bluthian subterfuge. He arranges to be assigned as her alegbra tutor, faking surprise when she shows up at his door. (The narrator praises the effort: “But for the phrase, ‘As I live and breathe,’ he nailed it.”)

Maeby is hopeless at math but blasé about it, as she plans to fall back on being, you know, “a harris.” George Michael wants to seduce her but his intractable nerdiness gets in the way: “I wouldn’t put all my Anns in that basket,” he advises her, before fumbling through some sexy math metaphors that he has to stop seducing to explain. (Maeby: “Let’s get wasted. Let’s drink that formula.” George Michael: “No, I’ll show you what a formula is, because that’s very important.”)

His ego flagging, and with no woodblock in sight, George Michael gets a chance to capitalize on the confusion his father has already sowed about the “Fakeblock software.” It would impress Maeby! To lie or not to lie? He goes for it, figuring, “Wouldn’t that be the course of action taken by an overtly sexual man, a man who owns a pair of matador pants?”

George Michael takes to falsehoods like a seal to water: “suddenly and effortlessly tapping into a long-inbred instinct for lying. A Bluth taking his first steps in deceit.” He’s actually been lying for a while now, but, OK, this is a HUGE lie — one that will only get bigger.

The world is hungry for the kind of software that George Michael says he’s invented, after all. P-Hound deadpans: “You mean something that keeps everything on the Internet private and protects everyone’s digital rights?” Can he make that? “No.”

As George Michael soon finds out, first you make up the lie, but then the lie makes up you. He is drawn along by the force of the fantasy into, among other things, the Opies gala — which is taking place at the same time and in the same venue as the Herbert Love fundraiser and the launch party for Mort Meyers’s “Schnoodle” software.

It is at the Opies that he meets Rebel, and photographs “Gibby from iCarly,” two events of equal significance, because Rebel will become his girlfriend almost solely because George Michael punches his iPhone for the snapshot exactly as the hotel fuses are blown and the “Schnoodle” debut fizzles. Having cheekily introduced himself to Rebel as “George Maharis,” that’s the name people peg to the Schnoodle sabotage.

The town buzzes about Maharis’s genius (Maeby is sweetening the buzz behind the scenes), and Maeby is anxious to get the software out the door: “How finished are you? 200 percent? 500 percent?” Replies George Michael: “I also feel I’m not 100 percent finished with your math tutoring.”

He’s about to give up the charade when Maeby puts the idea of revealing that this is all about wood to bed, telling him he can have his way with her “when you become an internet billionaire.”

Gob shows up in the story to set the gears in motion to get George Michael to pose as his boyfriend beard for gay magic night at the Gothic Castle, which leads to George Michael trying to meet his dad at the Ealing Club. He dodges his dad (there’s a tangle of overlapping traffic jam lies), but runs into Rebel, who is as charmed by George Michael’s goofy sense of humor as the rest of us. It helps, probably, that she thinks he’s an internet genius.

We close with Michael boring Ron Howard with the details of how his relationship with his son has gone south. Meanwhile, Barry Zuckerkorn advises George Michael on the intellectual property lawsuit brought against him by P-Hound: “Take to the sea!”

You guys, take to the comments!

David Henrie as himself (Wizards of Waverly Place is on a lot in Spain), Seth Rogen, Kristen Wiig, Andy Richter.