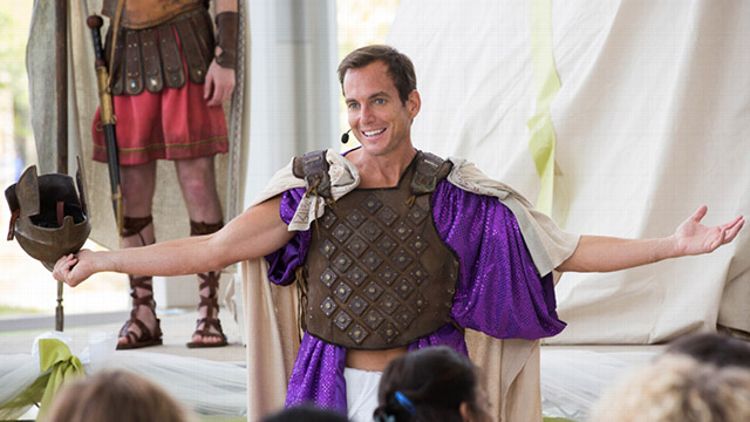 This Gob-centered episode takes places almost entirely outside the established, already loopy story lines of Season 4. Though it briefly swerves into Michael’s mission, and gives some context for what we’ll eventually discover about George Michael’s situation, Gob is — as usual — operating at the fringe.

In high school, apparently, Gob was the cock of the walk, but as an adult he’s a Segway-riding, garishly dressed, part-time illusionist whose primary skill appears to be seducing women who are very old or very ugly. Naturally, he still thinks he’s better than everyone: He’s the guy in the $6,000 pants, but metaphorically he’s garbed in whatever you’d call the opposite of the emperor’s new clothes. He thinks he’s dressed to kill; everyone else can see right through him.

Gob is charming in part because he doesn’t realize he’s so strange: just as much of a man-child as Buster, captivated not just by magic but — in this episode especially — fairy tales.

This is the episode when Gob discovers that he’s not the only man he wants to have sex with: In the ultimate meet cute, by which I mean to say, a “ludicrously contrived romantic encounter,” he falls for rival Tony Wonder (Ben Stiller). As Tobias might say: poof!

We open with Gob having just been asked to help Michael at Sudden Valley. We relive their one-upmanship conversation, right through to its drunken resolution, in which Gob takes over selling Sudden Valley houses and tells Michael that he’ll smooth things over with George Michael. All Michael needs to do is be his beard at the Gothic Castle’s gay magic night.

Gob wants to sabotage rival Tony Wonder’s act because he believes that it was Wonder who sabotaged his Jesus Christ bit. Michael reminds him that he doesn’t know for sure that Tony was the one who jammed his secret compartment (ahem). Counters Gob: “He got the last laugh, which turned out to be the first laugh. I don’t know why you can’t follow me on this.” (As someone who has to take notes to follow AD’s twisted chronology, I sympathize with Michael here.)

Michael declines the invitation, but Gob gets George Michael to meet him there: “I need a believable arm candy bean,” he explains. George Michael is uncomfortable being photographed by magic-camp (campy magic?) paparazzi, but Gob assures him that if any photos should get online, “that Fakeblock thing will scrub it away.” George Michael brightens up briefly before making his exit: “That’s my software!”

Gob gets to his real gay agenda: sneaking into Tony’s dressing room and “[locking] everything [he can] find,” so as to spoil Tony’s signature “into-the-closet, pop-out-of-a-box” trick. Yet Tony’s illusion succeeds: He was in a beanbag in the audience all along.

A chastened Gob winds up bonding with Wonder over drinks after the show. Sensing that Tony is flirting with him, Gob contrives a new method of revenge: He will make Tony fall in love with him, and then break Tony’s heart. He doesn’t realize that Tony is running a scheme of his own: He wants to steal the Fakeblock software that “Gob’s boyfriend” (George Michael) developed. It turns out that not only is Tony straight — his girlfriend is Sally Sitwell of the Bluth rival Sitwell family — but he needs the “Internet money” to pay back the $100,000 Sitwell stole from Lucille Two. The hundred grand went into branding Tony as the gay magician, though it’s weird that he needed the help. As he says, “The only thing I’m better at than [bleep]ing women is pretending I’m gay.”

Gob briefly detours into Bluth family business: Lucille tells him to get the wall built, or part built. He has trouble hiring day laborers to build a wall to “keep Mexicans out,” but when he visits the border to do the work himself, he runs into George Sr. compatriot China Garden, who says she’ll get some Chinese to build it. “They build great walls.”

Gob’s on a hot streak, in fact, because in addition to solving the wall problem, he’s also sold all the houses in Sudden Valley to the surprisingly solvent sex-offender community. Tobias gave him “a list of men who could fill every opening you have.” Gob’s ad: “Tired of explaining? S.O. What are you waiting for?”

Gob heads off to meet Tony at the Little Ballroom, and is followed there by Michael and Gene Parmesan. They are under the impression that Gob is going to meet Rebel Alley there, which according to Siri was the “gayest” of three listed. It’s a children’s indoor amusement park — Gob, nonplussed, marvels, “I do not get this lifestyle.” Michael confronts Gob about Rebel, and does not believe his protestations — but Gob at least thinks he’s telling the truth that he doesn’t know Rebel. In reality — as we know — he met her in her partying days. He put a dove in her purse while they goofed with Marc Cherry — the very “Dove (Bar)” in her freezer that led Michael to believe Gob was dating her.

Michael, furious, takes Gob out of the movie. (This will become a trend.)

Gob, meanwhile, goes to try to patch things up with Tony Wonder. He’s still thinking of breaking Tony’s heart but he also realizes that to get his revenge, he’ll have to destroy Tony’s life — “our life.” He and Tony have really bonded, emotionally if not literally. They can complete each other’s sentences, they have the same tastes, they’re both equally self-involved, and they’re both not really gay. Still, as the narrator says, “Perhaps it was pretending to be gay that allowed them to speak honestly.”

They each get a chance to take their revenge. Gob leaves Tony alone with his cell phone; Tony doesn’t realize that Gob has a chance to grab his Tony mask (the one that makes his illusions possible). Tony refrains from picking up the phone; Gob does stuff the Tony mask down his pants.

They discover they have feelings for each other: “The feeling was friendship,” says the narrator, “but neither of them had ever experienced that before.” They are flush with emotion but hesitant to act on them: “I would totally have gay sex,” says Tony, “but I just drank a lot of water.”

They agree to have “normal sex” (for gay people, gay sex is normal, they both reason) at Cinco de Quatro, for some reason.

The big day arrives and Gob wanders the pier for Wonder but finds Egg, I mean Ann. She has a 5-year-old she’s taking to see Fantastic Four. Gob balks at the 5-year-old. Is it his? No, explains Ann, it’s Tony’s — he took advantage of her at a weak moment, after Gob disappeared.

Gob grabs at a fresh revenge for a fresh hurt and asks Ann if she’d like to spend the evening making “revenge love” back at Sudden Valley. She eagerly accepts, only to discover that he wants Ann to wear his Gob mask (all the best magicians have masks) so that Tony will have sex with her — only to reveal on camera that he is a she. (The place is wired for video back from the “To Entrap a Local Predator” shoot.) Outing Tony as straight will ruin his career!

Tony arrives and Ann, frustrated and still angry with Gob’s bait-and-straight-bait switcheroo, asks Tony to help her out Gob as gay to ruin his Christian magic career. He will wear the Gob mask, and she’ll wear the Tony mask — when he asks why he doesn’t just be himself, she reasons that the only man he’d really want to make love to was himself. He agrees.

And so Tony and Gob wind up in a dark room, wearing each other’s faces, and doing what comes naturally (to them) in such a situation.

In the “On the next Arrested Development” segment, we see that Rebel’s paramour is none other than George Michael. Yeah, him?

Jokes that link up to seasons past:

Jokes that link up to the current season: