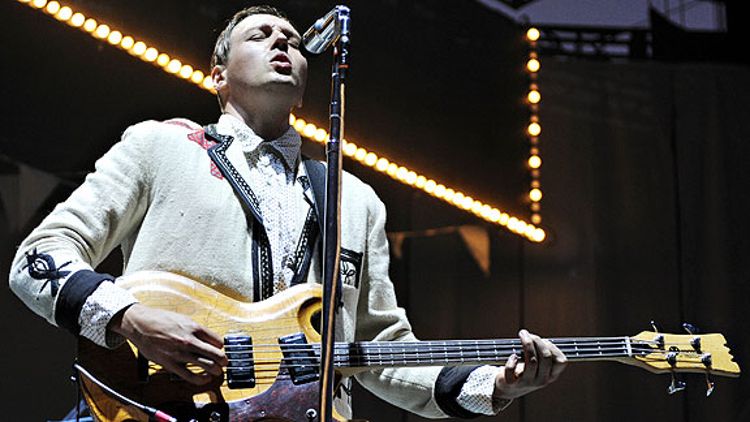 Great news, everyone: on September 10 in Toronto, the charity event Rock the Court will offer you — you! — the chance to play basketball with multiple Grammy Award winner Win Butler. The Arcade Fire front man, a noted basketball aficionado, will be lacing up his sneakers alongside City and Colour singer Dallas Green, plus the Spurs’ Matt Bonner and the 76ers’ Spencer Hawes, to raise money for Athletes for Africa and St. Alban’s Boys & Girls Club. To enter, you must get together a team, plop down $500, and travel to Toronto. But what if you can’t get to Toronto, or don’t have $500 or friends, but still want to see Win Butler dunking on fools? It’s cool; we just had an idea. This is only the latest development in the love affair between indie rock and basketball. Well, now — with an NBA lockout looming and everyone in the music business looking to “monetize alternative consumer channels” or whatever — why not an indie-rock replacement league?

The talent pool is filled high. To name just a few: There’s Bon Iver’s Justin Vernon, who’s ran ball with the indefatigable Kanye West (Says Vernon of recording sessions in Hawaii: “I first got there a little jet-lagged from Minneapolis. Before I went to the studio, he picked me up and we went to play hoops”) and been scouted by Dirty Projectors bassist Nate Baldwin as a “really good” “post player” who’s “like 6’5” or something” and has a “good jumpshot.” And Baldwin — who once released a solo album featuring a photograph of himself shirtless, holding a basketball — can play too: “I haven’t come across any [indie-rock] guards that would be able to handle me,” he’s boldly declared. Battles’ Dave Konopka, who’s
said, “I’m 35 years old; I can’t jump the way I used to jump when I was 17,” can play the part of the cagey veteran. And Blazers-obsessed Pavement front man Stephen Malkmus (from Chuck Klosterman’s 2010 Malkmus profile in GQ: “I cannot exaggerate the degree to which Malkmus enjoys fantasy sports; he almost seems to like them more than music”) can coach. Win Butler would probably lead the league in steals.

Please, somebody, make this happen.