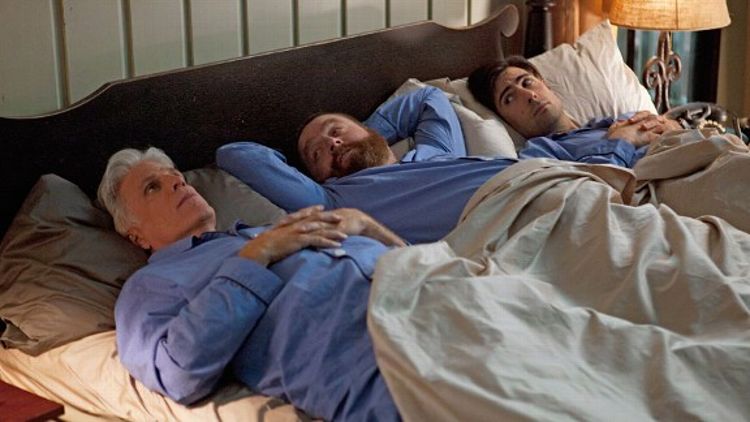 According to people better informed than myself, last night’s episode of Bored to Death — the finale of its third season — could be the show’s last! episode! ever! (Ratings are not spectacular). That would be a bummer: Jonathan Ames’ detective comedy has provided an abundance of joy and wonderment over over its 24 episodes, and there’s certainly more fodder to churn out from the show’s oddball aesthetics. However, let us not make this a time of preemptive mourning. Let us make it a time of preemptive tribute. With Bored to Death gone for the airwaves for a while (and hopefully not forever!), we present a short list of what makes the show great.

1. The Cast.
If Bored to Death does indeed get canned, its stars won’t need to worry about finding new work. In fact, Ted Danson and Zach Galifianakis were already double-booking it, with gigs on CSI and every freaking big-budget comedy ever, respectively. But this is the show that brings out the best in these guys. Jason Schwartzman has been hangdog-charming elsewhere, but as Jonathan Ames’ accidentally effective, semi-heroic private eye alter-ego he’s hit the slouched-shoulders bulls-eye. Galifianakis’s Ray Hueston is his trademark man-child thing, but here it’s much more layered than it is on the big screen: not only do his philandering, layabout ways make him nearly unredeemable, but he’s also actually conflicted about his stunted growth. Here’s a nice bit of quibbling from earlier this season, which comes after Ray, a professional cartoonist, gets upset when George pins one of his drawings on the refrigerator.

Goerge: “But I tuck you in every night, I bring you food from the restaurant. I thought you like being infantalized?”
Ray: “Yeah! At my bedtime and at my mealtime.”

Meanwhile, Ted Danson has straight-up hijacked the show. His character George — a high-powered magazine editor turned pothead restaurateur who is touchy, rich-person delusional, and totally likeable — is a tricky act to pull off. But Danson nails it, turning in an easy, honest, irrepressibly optimistic vibe. Over on CSI, where you might catch him collecting fly-droppings from the scooped out eye-sockets of an assassinated deer, it’s just not quite the same.

2. Surreal Touches
The basic premise of the show — that Jonathan Ames finds himself in scintillating old-timey adventures via a Craigslist ad for his detective services — is ridiculous. But this season, the outlandishness has gone up a notch. Throughout the season, Jonathan has hung off the hands of a giant clock, Harold Lloyd style; survived a shootout by zig-zagging through a carousel; and, just last night, saved the day by shooting guns out of a pair of goons’ hands after sliding into home plate. When combined with the BTD’s crew general bumbling, this kind of thing might come off as maddeningly inconsistent. For those with joy in their hearts, though, it’s great: in between the persistent, realistic screw-ups and disappointments, the show embeds these little bits of perfection. The fuzzy reality of the series also means Bored to Death can even pull off something like last night’s quasi-technical-incest plot line.

3. Nerds Getting Chicks
The list of ladies bedded by Ray and Jonathan over the course of the series includes, but is not limited to: Olivia Thirlby, Kristen Wiig, Jenny Slate, Heather Burns, Zoe Kazan, Isla Fisher, that one girl with elf fears and, watch out now, Olympia Dukakis. Not bad for some emotionally under-developed sadsacks! (George, who is at least outwardly suave, is an exception, as you’d expect him to be running around). Like the weirdly successful shootouts, it’s more of the show’s aspirational wish-fulfillment. But it’s equally as nice to see all three of our heroes agonizing over nearly every one of their sexual encounters. In the case of Jonathan and his, ergh, half-sister Isla Fisher, the agonizing is particularly justified.

4. Weed on Screen
If you happened to catch A Very Harold & Kumar Christmas, you know that even that most venerable of weed-smoking franchises has greatly turned down the drug usage in its latest go-around. This kind of thing tends to happen the longer pot-smoking characters exist. It’s understandable: the more popular something gets, the less marginalized its creators want to make it by associating with illegality; also, it probably gets boring writing “CUT TO: A smoky car” over and over. Still, though, it’s a drag: I, personally, am of the opinion that a weed comedy should involve a ton of weed smoking. And Bored to Death, bless its heart, has kept right on puffing. Throughout its three seasons, Ray, George, and Jonathan continue to get high on the regs, then make major plot-impacting decisions while under the influence.

5. Best Pals Forever
According to New Girl creator Liz Meriwether, her show is about “friendship… It’s about [Zooey Deschanel’s character] Jess learning how to be friends with those guys and those guys accepting Jess into their world and becoming friends with her as well.” She gave that answer, though, to a question about the seemingly inevitable coupling of Jess of and another character. But unlike New Girl and other Friends-y sitcoms that juggle the buddy stuff with the love stuff, the romance always takes second place on Bored to Death. It’s the rare show that really is about best pals. And in its own way, it sort of functions as the anti-Entourage; the trio have adventures, they look out for each other, they listen attentively to each other’s problems. At one point during last night’s episode, Ray introduced Jonathan to Mary Steenburgen’s character by saying, “This is George’s only other friend.” And that’s perfect.