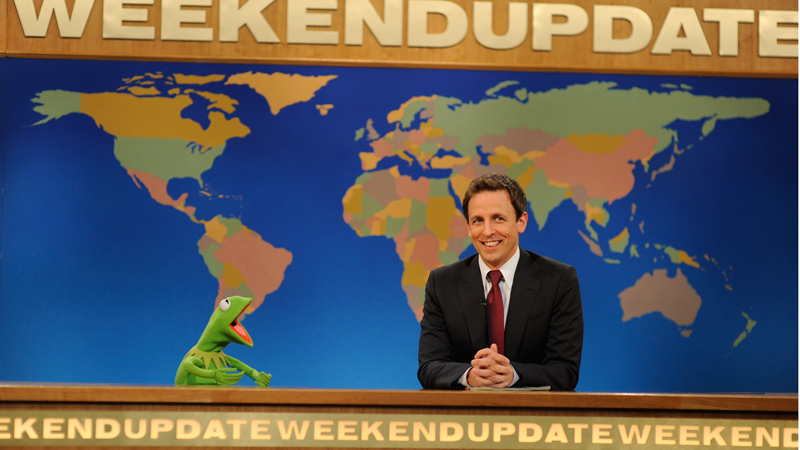 Seth Meyers’s first appearance on Saturday Night Live was on September 29, 2001, less than three weeks after 9/11. The only sketch that featured him that night cast him as a floating fish head. Meyers shared his inaugural season, the show’s 27th, with newcomer Amy Poehler, who was quickly promoted from featured player to full cast member; in 2004, she beat him to the “Weekend Update” co-anchor chair alongside Tina Fey after both of them auditioned for the spot. (When Fey departed two years later, Meyers took her place.) And now, Poehler will be Meyers’s first guest on Late Night With Seth Meyers on February 24. It’s neat and tidy — on-brand, perhaps — but also speaks to the fact that Meyers is the kind of person who performs generously and respectfully. He’s best as a straight man (which may be why his impressions have been overshadowed by his anchorship), but not the kind of straight man who throws up his hands and furrows his brows at the insanity of his company. He’s welcoming and seems perennially amused by the world and its characters, which may be why Sarah Palin submitted to an “Update” appearance with Poehler and Meyers, though she’d be sitting beside the man who had written the sketches that had skewered her. He skewers gently, as if with a spork.

Meyers’s impressions (John Kerry, Anderson Cooper, Ryan Seacrest, among others) and sketch characters (for example: half of the bickersome Needlemans, physicist Dave Zinger) were fine, but as Meyers told NPR in 2008, that wasn’t really his niche: “Around my third season, I sort of had this like terrifying observation that I was a very — I thought I was a good sketch performer at a place where you had to be great […] there’s just that haunting thing of just not feeling like you deserve to be there. And I feel — I feel I’m much more like I’m earning my keep as head writer than I did as a sketch performer.” Soon after that interview, Poehler left and Meyers anchored solo for five years, until Cecily Strong joined him in 2013.

Meyers joined the cast just as the show was becoming more female-friendly, and as head writer he seemed to maintain a commitment to providing SNL’s women with material that emphasized their talents (though it’s probably hard to go wrong with the female sector of the current group, including standouts Kate McKinnon and Strong). Maybe it’s because he inherited the head writer role from Fey, or learned the ropes at the “Update” desk from Poehler (can’t beat those senseis); maybe he’s just a nice, smart, fair gentleman — the kind of guy who’d make hot cross buns with his buddy Martha Stewart. Either way, his “Update” replacement, Colin Jost, has his work cut out for him. Meyers won’t be far away (it’s still late! It’s still NBC!), and yet … doesn’t anybody stay at one desk anymore? Meyers’s last show will be this Saturday, and while it’s hard to compile a best-of clip list for someone who did so much of his work behind the scenes, here are a few segments to treat yo Seth.

Meyers was the lead writer in every Palin sketch but one. This is Palin’s (Fey) debut, when she informed us that global warming “is just God, huggin’ us closer.” 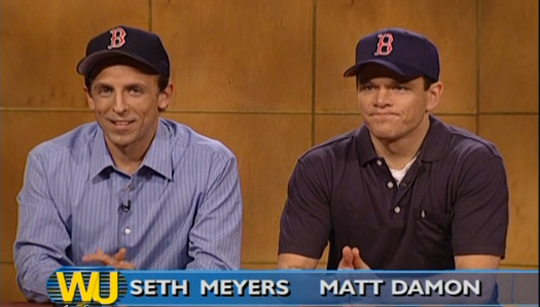 I always felt Meyers had an extra layer of humanity to him. I think this comes from being a Sox fan living in New York.

Stefon (Bill Hader) and Meyers had such incredible chemistry, you almost had to wonder if Stefon would have been able to shine like the brilliant diamond he was without his trusty foil (the nightlife correspondent respected Meyers so much, he didn’t even slip him the tongue during their endless smooch — so chaste, so pure). Stefon’s final episode unites them in holy matrimony, and features Meyers punching Anderson Cooper in the face. Every great love affair must sustain some casualties, and no silver fox can stand in its way. 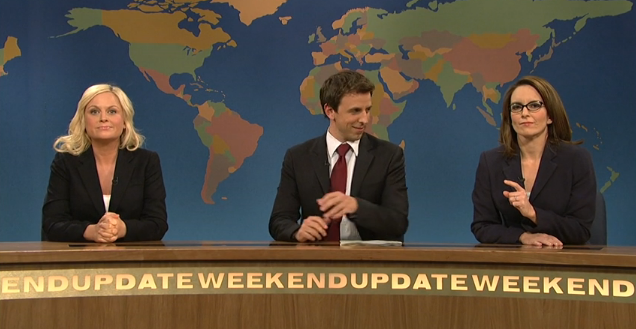 “Really?!?” was another great pairing — and played to Meyers’s endless shippability, with Stefon, Poehler, whomever — but this is a farewell party, so we may as well invite Fey along too. Too crowded for you? Take it up with the IRS. 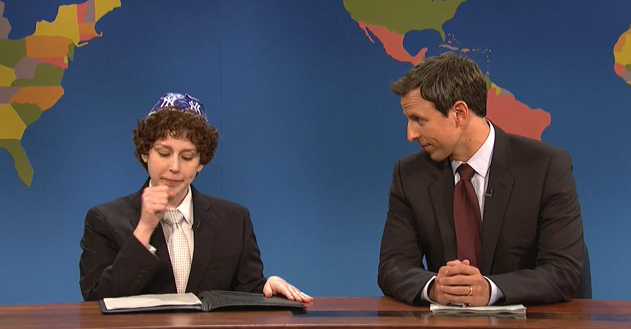 Jacob is too young to understand the harsh realities of career transitions. This is going to be really rough for him. Whatever: It’s a mitzvah. Best of luck to you, Meyers (and I’m not just saying that because we’ve shared space on the same podcast network). Anchor, aweigh.

Dumpuary Movie Report: The Naked Awfulness of ‘That Awkward Moment,’ ‘Ride Along,’ and ‘Labor Day’