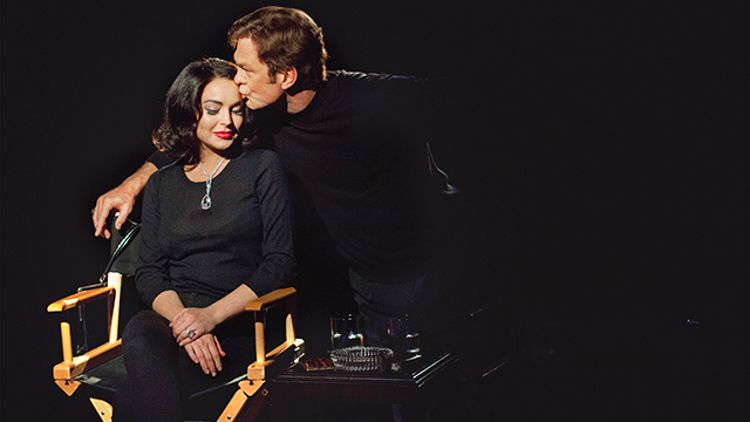 Like everyone else with an Internet connection and a soft spot for Lindsay Lohan, Grantland staffers Molly Lambert and Emily Yoshida watched the Lifetime Original Movie Liz & Dick this weekend. Like everyone else, they were left alternately baffled and annoyed, and definitely with more questions than answers.

Molly Lambert: Where to begin? There’s so much to unpack from this crate of first editions on the deck of a yacht. I can’t think of another TV movie in recent memory that’s captured the public imagination like Liz & Dick. In a lot of ways it totally delivered. Lindsay was better than I expected, but that’s the upside of low expectations and good retro styling. It’s a thin line between camp and contempt for the conventions of realism posing as camp (cough, Ryan Murphy), but I felt oddly moved by the end. I got sucked into wondering how factual it was. The Taylor-Burton relationship felt overall more toxic than passionate. Burton was a master of the Welsh neg.

Emily Yoshida: You’re not alone in having your curiosity piqued despite the horrific trappings. As one of my fellow viewers said after the credits had rolled, “Well, I’ll definitely have to Wikipedia their relationship now.” We learn basically nothing.

Lifetime has been pretty self-aware about its movie productions in the last few years; the launch of the Lifetime Movie Network is definitely an acknowledgement of their camp appeal. But I guess some part of me still thinks that someone at the helm of this thing genuinely wanted to bring Taylor and Burton’s relationship to the screen — not a ridiculous idea at all; if you do indeed go and do some Wikipedia-ing you’ll find a pretty fascinating, emotionally bonkers saga that just couldn’t quit itself. If that’s the case, though, then I don’t know who this movie is for. Burton-Taylor ‘shippers would do better to just Google it again — the whole movie is just Lindsay Lohan and Grant Bowler shouting plot points at each other. I guess Liz & Dick is for blind people still waiting for the Braille edition of Furious Love.

Lambert: I feel like it’s hard to make a tempestuous relationship translate well onscreen without it just playing like emotional abuse. I got a few notes of Twilight here and there.

This movie is for people like me who love Valley of the Dolls and are still curious about Lindsay Lohan (against all odds). Lindsay has always been into Old Hollywood cosplay, having dressed up like Marilyn Monroe and Liz Taylor before, as if she could will herself into icon status. The parallels between Taylor and Lohan are numerous, if not necessarily flattering. Taylor was a worldwide star at the age of 12 after National Velvet, goaded into acting by a stage mother who made her practice crying on cue. Lohan has the world’s most embarrassing set of stage parents, whose greatest talent is that they sometimes make Lindsay seem sympathetic in comparison and put her public sociopathy into forced perspective. I felt bad for both Lindsay and Liz during the later portions, when Liz Taylor turns 40 and complains about the lack of roles for women her age. We were left to meta-contemplate how Lindsay Lohan went from “It” girl to has-been between the ages of 11 and 26. Watching her don the Linda Richman wig and pearls of White Diamonds–era Liz felt like watching a porn star in her waning years prepare to show off her latest set of surgeries. 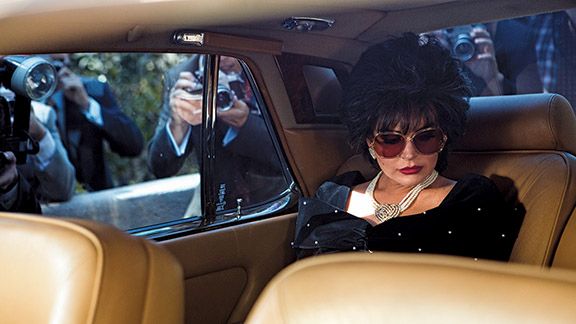 Yoshida: There were a few specific ways in which Lohan’s casting was perfect, namely how she has to play a woman from her early 20s to her 50s, and Lohan both acts like a perpetual teenager and looks to be approaching middle age (sorry). But obviously, at this point it’s impossible to watch her onscreen without having her public troubles in the back of your mind, if not the forefront. There were just too many moments in Liz & Dick that felt devastatingly on the nose: Liz clawing her way to a role in The V.I.P.s by telling the producer “You’ll save money, and I’m a huge hit”; drinking and weeping “I’m a joke” on her 40th birthday; all the paparazzi scenes.

Oh right, yeah, the paparazzi scenes. Has there ever been a successful example of a tabloid-fodder celebrity addressing their struggles with the press in a creative work? It always comes off as boringly literal, self-absorbed, and/or oblivious (the lesser hits of Britney Spears, Lohan’s own “Rumors”). You know that during those paparazzi scenes Lohan felt she was part of some grand statement on the nature of fame and overexposure with which she is all too familiar, but it’s a reenactment, a statement of fact, nothing more. Which I guess is basically the Lifetime formula.

I think engaging with the tabloids was the old-school version of falling for Twitter-bait. Lohan is this weird Norma Desmond figure that we pity for being self-aggrandizing and so off the mark. Everyone remembers her promise in Mean Girls, and the million chances she blew. We want her to be a better actress than she is because we feel responsible somehow for turning her into a commodity as a kid. Everyone seems hard-pressed to really slam her in reviews because there’s so much general sadness about her career arc. It’s like no one wants to tell her she’s been entirely replaced by Emma Stone and Jennifer Lawrence. There were flickers of decent acting in her performance, but all in all she was stiff.

Yoshida: She keeps affecting Grant Bowler’s accent, and oh Lord, it’s so distracting. This film is an exercise in waste, which makes it too depressing for me to really be able to watch “ironically.” It’s a not-so-veiled acknowledgement of the waste of Lindsay Lohan’s once-promising career, and a waste of a good story that could actually be interesting and weird and sad in the hands of a weird or sad director.

The reviews may have minced words, but on Twitter, the eagerness to trash Lohan was the kind that only comes up when everyone is certain that the person in question is too removed from reality to realize what’s happening. Which I guess is a fair assumption? I don’t know, in all of Lohan’s junketing in the last couple of weeks I couldn’t help but wonder if the Lifetime flacks were telling her to talk about the film like it was a serious endeavor of filmmaking/acting so as to keep the campy disbelief suspended, or if she didn’t need any direction because she genuinely thinks everyone else is on the same page as she is.

Lambert: Lindsay Lohan makes her own reality. I mean, at least it was better than the one where Jennifer Love Hewitt played Audrey Hepburn. But yeah, there was definitely a depressing snuff-movie feel to the whole deal. Like the objective was clearly to gawk at someone who doesn’t realize that you’re laughing at her. She’s been socialized since childhood to regard any type of attention as positive. It’s hard watching a person with no self-awareness attempt to seem self-aware. Remember those horrible Funny or Die dating videos she made? Lindsay may have Liz Taylor’s same mix of feverish insecurities, big ego, and great rack, but it doesn’t make her believable in the role. I don’t know if there’s a director that could pry a revelatory performance out of her, but I’ll probably always keep a candle lit for Lohan. Maybe she should call David Lynch?

Yoshida: I had the same thought about Lynch after watching this mess, both for Lohan and for the Taylor-Burton story. Both are so thoroughly stuck in dreamland that there are very few directors who could find any genuine, personal affinity for them. If Lindsay stands a chance artistically at all anymore, it has to be with a project that’s not mocking her behind her back. (Looking at you, Bret.) Now that I’ve watched Liz & Dick twice (where is my medal?), my only lasting impression is that I’ve been trolled for three hours. Knowing that all the laughs are probably intentional kind of takes the fun out of the bitingly witty live-tweets, doesn’t it?

Lambert: Unfortunately, I think Lindsay as Liz summed it up best when she yelled lifelessly, “I’m bored! I’m so bored!”

The Walking Dead Season 3, Episode 7: 'When the Dead Come Knocking'