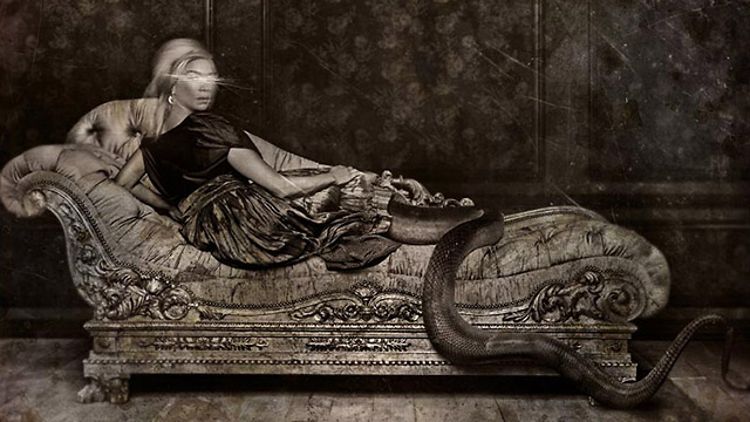 During American Horror Story: Asylum, the second season of Ryan Murphy and Brad Falchuk’s epic and award-winning horror saga — I personally would give it all the Emmys, because it’s daddy’s favorite show — there were moments when we viewers were so assaulted by the over-the-top violence and totally bizarre twists that we simply had to laugh. Between the Nazis, evil breast-feeding fetishists, nun-rapists, and aliens, we had to figure the co-creators were kind of testing our mettle while having a bit of a laugh over their shared sadism. Unbelievably, it all worked.

The show’s third season, American Horror Story: Coven, which premieres tonight on FX, already seems like a tropical vacation by comparison. The jokes — which include hat tips to Hogwarts, Sabrina, the Teenage Witch, and Shirley MacLaine (Jessica Lange’s supreme witch briefly reports on a spiritual retreat taken with MacLaine in Sedona) — are more plentiful than in seasons past, though there’s no shortage of scenes that require trigger warnings for the tenderhearted. Coven also can’t help but play with self-referential dynamics, because so much of the cast has appeared in one or both of the prior seasons. (Plus there’s the fact that real-life couple Emma Roberts and Evan Peters, who divide their time together between fang-baring fights and sharing “a pot of ice cream,” co-star.)

In Asylum, Lange played Sarah Paulson’s personal terrorist turned ally, but in Coven the two are mother and daughter. Taissa Farmiga and Peters now share what initially appears (ah, romantic gazes through a frat house ice luge) to be a more wholesome teenage romance than they did in Season One, titled American Horror Story: Murder House, during which [PAST SEASON SPOILERS!] Farmiga’s goth girl was wooed by Peters’s malevolent Rubber Man, who liked to rape and sodomize people when he was in ghost-y BDSM mode. Jamie Brewer, Murder House’s Adelaide, is now Lange’s student instead of her daughter. Frances Conroy’s and Lily Rabe’s new characters are primed for camp after playing the Angel of Death and the devil, respectively, last season. (Rabe is a “poor Cajun girl,” a swoony and drawling necromancer in a nightie.)

If the first season dealt with family and domestic horrors, and the second with church, state, and institutionalization (which is open to interpretation), Coven establishes itself early, and unshockingly, as being about women. Set at a witchy finishing school for “exceptional young ladies,” the first episode (titled “Bitchcraft” for your enjoyment) introduces us to the small group of pupils through the eyes of Zoe (Farmiga), a witch who has just discovered she possesses the most bummer of special powers: Everyone she has sex with dies, and not eventually like all of us, but rather immediately and mid-coitus. I don’t know what this symbolizes, but I’m sure it’s awful.

Also attending Miss Robichaux’s: Madison Montgomery (Roberts), a bitchy starlet with telekinesis; Queenie (Gabourey Sidibe), a living voodoo doll; and Nan (Brewer), a psychic. Then there are the adults past and present. Kathy Bates’s Madame LaLaurie (a 19th century torturer of slaves) and Lange’s modern super-witch Fiona Goode are both shown fussing with their faces in the mirror, freaking out so much that LaLaurie, “infamous for her vanity,” is driven to the habit of painting her face with human pancreas cream to keep her neck waddle at bay.

While the girls are struggling with the decision of how and when to use their burgeoning powers — witchiness and adolescence share so much overlap! — the women are desperate to regain something lost, or at least look as vital as they feel. Fiona is on a mission to restore the “dying breed” of witches unless they start wielding their powers, so she wrestles for control of Miss Robichaux’s with her daughter, insisting that the new generation of witches will be victimized by viral media and turned into “a dog who says I love you.” During one of the more hard-core scenes, social media comes up again, this time referencing the horrific, and real, ways in which the Internet can be used to its own violent effects, with women making up a large percentage of the victims.

Yet there’s a real effort made at levity, because it wouldn’t be a season of American Horror Story without a Lange dance number, and this year’s is my favorite: It felt like Stevie Nicks and Patrick Bateman had a mature love child living in a penthouse, and she was wearing black chiffon (like a gold dust woman) while swaying to “In-A-Gadda-Da-Vida.” And though the circumstances are dire, when Angela Bassett bellows, “Mon chere, WHAT HAVE THEY DONE TO YOOOOU?” the viewer has no choice but to succumb to giggle heaven despite him or herself.

And dear lord, did they have to bring Hurricane Katrina into this? (“When the levees broke, the people of New Orleans were tested” because, you know, that’s when “all of the bullshit falls away.”) Well, yes, because the only rule of AHS Club is that they stuff it like a 500-pound calzone made for elite stoners: Everything goes in. It doesn’t just apply to the plot, either: Recurring AHS director Alfonso Gomez-Rejon plays around so much in this premiere that it alternates between looking like an 1890s live-action Looney Tunes and a fish-eye acid trip, which may actually be perfectly appropriate, because cartoons and body dysmorphia work so well in this context.

AHS has always had a knack for establishing a huge world immediately, and Coven doesn’t seem to be an exception. Each season exists in multiple and overlapping time periods, and brings the dead back to life in a way that defies logic in the most believable-unbelievable way. It never feels cheap, and though it’s essentially a horror soap opera, there’s something about it that’s way more like a truffle than a candy bar.

Maybe that’s because the actors, both new and returning, always seem down to roll with the risk-taking formula. It’s palpable, and it telegraphs “trust us, it’s good.” And so we do, again, because even though we may have doubted how an extra 25 percent of humor would alter the chemistry of the program that gave us brains on a plate and made steam come out of the PTC’s ears every time it aired, it looks like we might have been wrong. Put aside your culturally induced witch fatigue and try not to think about True Blood. These aren’t just witches, they’re diva witches. It’s bitchcraft, bitch.

Kanye's Beef With Jimmy Kimmel Ends Tonight, on Your Television