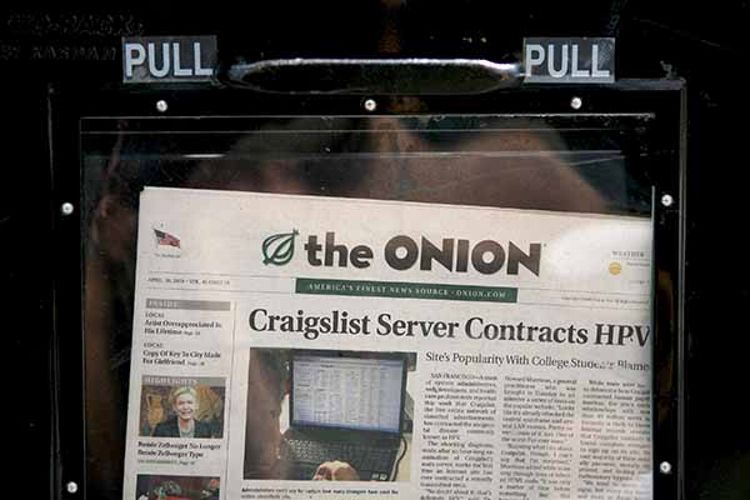 December 12 is the Onionpocalypse, friends: the date when the funniest newsweekly in the known universe will cease physical publication in the face of sagging ad revenues. The Onion was founded 25 years ago in Madison, Wisconsin; its website shall stand strong. “It’s sad to see a print edition no longer exist, but it’s important to see The Onion succeed,” says Onion Inc. president Mike McAvoy. As long as we’ve got this Tumblr where Facebook clowns believe Onion articles to be true, we should be all right.

Lionsgate has “been approached about Hunger Games theme parks.” And is considering them. Great place to threaten to send the kids.

Ridley Scott’s next project is a movie about concussions in football.

Angela Bassett and Kathy Bates have been approached for another round of American Horror Story.

Urgent Slow TV follow-up: You can watch an eight-hour train trip from Bergen to Oslo in real time; here’s Part 1.

Someone baked a life-size Captain Jack Sparrow cake. It stands on its feet. I miss when cakes were for eating.

Beyoncé FaceTimed with a fan during a show. Wonder which emoji Beyoncé uses the most.

Our generation’s “everyone sitting in front of the TV watching the moon landing” moment: Everyone watching a three-hour NBC special about Richard Branson flying his Virgin spaceship into space.