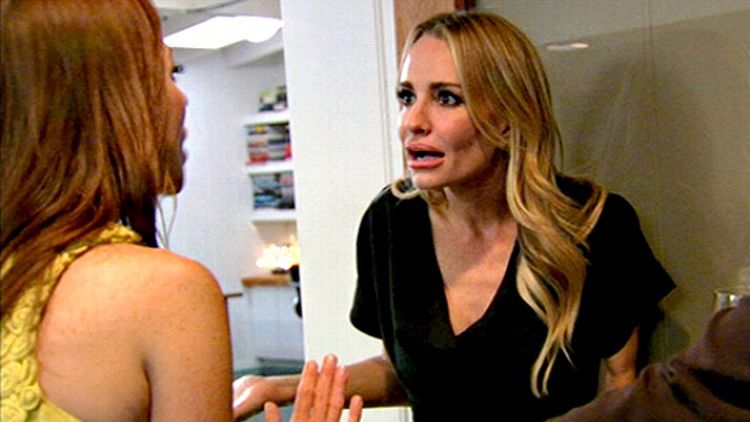 It’s hard to be a person who enjoys reality television. Not only do you have to struggle with the stigma of being the kind of piggy media-vacuum that sucks up big tumbleweeds of TV-watching every day, but you must at some point acknowledge your involvement in creating celebrities out of people who are (or — more likely perhaps — presented as) often scuzzy, vapid, or just downright horrible. You may worry, during some idle hour after watching what you swear will be your last episode of Jersey Shore, if you are responsible for making Snooki (and I should make the distinction between Snooki and Nicole Polizzi, the character on Jersey Shore versus the person none of us know: As with all reality show cast members, there exists the possibility that, like Jessica Rabbit, they aren’t bad, but just drawn that way). You may feel, down to the dark and most honest root of your confused soul, as though you never really cared about Snooki, but in fact you cared enough to train your eyes on her for several seasons. You familiarized yourself with her vernacular and recognized her unflattering likeness on South Park. You had a tent and occupied Jersey Shore in an accidental cultural movement; if you had been alone in your passive interest, it wouldn’t have mattered, but you were one of so many people that, for about a year, you could see the footprint of the show from space, and its halo of hair gel, and its Obey T-shirt.

But there is a show that causes an even bigger self-hate reaction. That show is The Real Housewives of Beverly Hills.

Ask anyone who watches this season of The Real Housewives of Beverly Hills how it feels to be part of the show’s viewership, particularly after the suicide of cast member Russell Armstrong, and prepare for an answer in metaphor form. My personal impressions as a viewer: The show is like being addicted to a no-fun brand of integrity-destroying methamphetamine, like watching a bus crash into a crew of kindergartners, like eating a bowl of paradoxically satisfyingly crunchy and salty exploded light bulbs.

Though I have tried, I never was as gripped by any of the other Real Housewives subspecies as I was by the crew from Beverly Hills — women with frozen faces who roam The 90210 all day like fluffy-haired bison are emblematic of Los Angeles, and the implicit strangeness of their plastic surgery hints at a secret sadness that can be gripping to wonder about, especially if you have a good view at the Polo Lounge. Whereas people pay three dollars to flip to the section of the tabloid that humanizes celebrities by picturing them struggling with broken umbrellas and getting salad dressing on their chins (oh, stars: They’re just like “us,” such messy eaters), we also spend hours watching a show that is based on the premise that we are making stars out of people who are nothing like us. They live fifteen minutes away from most L.A. residents, the vast majority of whom have never heard of any of the boutiques they frequent or seen anything like the cakes they order for tea parties. And especially not tea parties like these, where dogs in pink sweaters lap at camellia blossoms in a fountain and someone has hired a camel to greet you at the door.

It would not feel so humanity-soiling to watch The Real Housewives if a person could watch it off the grid, or if there were a one-season cap on anything that exploited its cast members (or allowed its cast to exploit themselves). The problem is that, naturally, the more things fall apart onscreen and off (but never out of view, thanks to TMZ), the more we invest in these shows until we are left horrified by what we’ve seen, and even after that.

Every reality show has its puppeteer, whether it’s Kris Jenner or a production team that arranges a champagne brunch consisting of six people who hate each other — and are encouraged to hate each other using their outdoor voices so that we’re tricked into thinking something is actually happening. As much as we dislike the idea of being duped into believing these plot points are naturally unfolding, we’re much more squirmy when confronted with unscripted chaos: When RHOBH housewife Taylor Armstrong’s husband committed suicide last August, it seemed to push the show down into the sewage water where Celebrity Rehab with Dr. Drew dwells. It seemed hard to believe it would continue, especially since showing post-Russell footage of people hawking shoe lines seems vaguely sacrilegious. To continue to support the viewership of this show became morally difficult to embrace, and yet its ratings suffered little, probably due in part to morbid curiosity: Would footage of Russell appear? (Yes.) Would any efforts be made to divert attention from this too-real event, to draw the focus back to planning Pandora’s bedazzled wedding? (Of course not; the suicide had already become the central focus of the season, like the gun in Act 1 that you know will go off by Act 3.) On a recent installment, the topic of Russell’s physical abuse of his waifish wife Taylor was introduced, and the housewives hinted at the fact that it had lurked behind the scenes of many episodes before. Perhaps “hinted” is the wrong word, since Camille Grammer exclaimed, from a shabby-chic sofa, “We don’t say that he hit you, or that he broke your jaw, or he beat you up. We don’t say that, but now we’ve said it.” Yes, you have! If Russell were still alive when this episode aired, what would have happened to him? How would he have continued to sip drinks on rooftops with the women who have become privy to his darkest, least TV-friendly Mr. Hyde side? Would the social Jenga tower have imploded? And because he is not alive, what are we supposed to do with the information that he allegedly beat his wife? What punishment could we wish on him, after he’d delivered himself the ultimate punishment? There is no appropriate response.

In Season 1, Russell Armstrong the character was not likable; he was stiff and socially tone-deaf, edited to repel us (or perhaps that’s just how he was) and to extract our sympathies for Taylor; though he was also struggling with debt and deeper troubles in his marriage than those that were presented as plot points, it’s hard not to wonder if watching himself through the eyes of Bravo contributed to Russell’s decision to hang himself. After his suicide, Season 2 was introduced with a recently shot insert during which the housewives, minus Taylor, sat on sofas and uncomfortably discussed his death, frowning or affecting frowns without creasing any newly pressed derma.

I don’t know what would have been an appropriate bridge between a news item about a suicide and an episode of television about Camille Grammer’s guest spot on $#*! My Dad Says — maybe that’s just too tall an order — but this scene seemed insufficient. To react to this event and the show in its aftermath is a conundrum: You have to separate the real people from the producer- and editor-honed avatars, and the floating inflated balloons of fake dramas from the stuff that’s not supposed to be your business (of course, there’s the feeling that everything these people do becomes your business after they invite a camera crew into their homes; whether or not this should be true, it’s the implications of celebrity). There seems no way to reclaim your investment unless you gather all of the information and differentiate between what was real and what never was. Before you quit, before you cancel your season pass, you want to distill it down to something you could maybe have passed off as an art semiotics paper: Our modern means of self-promotion makes it easy to story-edit ourselves, to present our dramas meted out for effect and to conceal the real dirt until it’s safely in the rearview. Maybe we relate to the often-misguided ambition of the participants of these shows because we recognize it in ourselves. But this is a show about excess, strangeness, and the difference between the haves and the have-nots, and so one of the layers of our emotional napoleon is frosted with disgust.

To be disgusted at someone who only exists in last year’s archival footage and last week’s tabloids, someone manipulated into entertainment and — well, deceased — is unsettling, so we’re left numbly wondering how we got into this position in the first place. We’re stuck waiting for the big reveal, as we did when the contestants on The Swan removed their facial gauze and stuffed themselves into evening gowns post-surgery. It’s only when we see what we’ve waited for that we realize: We never wanted to know.