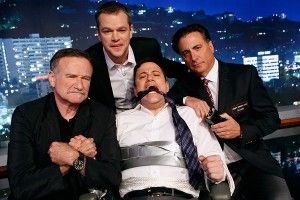 For 10 years now, Jimmy Kimmel (a Friend of Grantland) has been signing off with a dismissive nod to a certain A-lister: “Our apologies to Matt Damon, we ran out of time.” This endless, ruthless bumping of Mr. Jason Bourne has led the two down some peculiar roads over the years: There was Kimmel’s ex Sarah Silverman shtupping Damon, and admitting as much in a gorgeous musical medley; there was Kimmel shtupping Ben Affleck right back. And, despite all that pain and damage the rivalry had wrought, on it went: Matt Damon, an American treasure if ever there was one, bumped from the show, over and over again. Last night, after all those years of mental anguish and scorn, Damon sought his revenge. Sensibly, he duct-taped Kimmel to a chair, stuffed a tie in his mouth, then did Kimmel’s show instead. Oh, what a sight it was! Filled with celebrity friends — from Robin Williams to Andy Garcia, Sheryl Crow to Benny Affleck — and secret audition footage and jokes about Siri and the joyous glee of a man enjoying a whole elaborate Count of Monte Cristo thing. Now this is how you exact years-in-the-making revenge. Matt Damon, you’re an inspiration to us all.

Rembert Explains the '80s: David Bowie and Mick Jagger, 'Dancing in the Street'