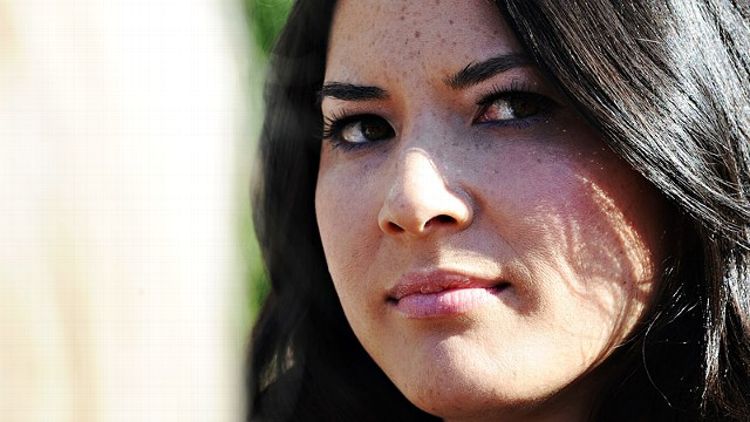 When Christina Hendricks’s and Olivia Munn’s phones were hacked and their private nude photos released online earlier this week, they both denied that the photos were real. (Go ahead and “do a Google” if you need to find them; they’re not hard to track down.) In Hendricks’s case, she did admit that her phone was hacked, and I know it’s possible they are not her boobs in the photograph … but girl? They sure look like your boobs. It’s unfortunate that so much of the discussion about Hendricks is focused on her (awesome) boobs, because she is really an amazing actress. The undeniably gross ethics of this kind of hacking aside, these are not the worst nude photographs ever taken. They are flattering enough, and mostly in corsets? There are topless shots, but nothing like full spread or anything. The self-objectifying isn’t that weird since these are actresses we’re talking about. Munn has a couple of full body shots in lingerie, which would be no more risqué than publicity shoots she’s already done if not for the obvious “intrusion of privacy” feel of the cam-phone shots and the extremely NSFW captions addressed to “Chris,” presumably Chris Pine, with whom she was linked in 2009.

The overall effect of Munn’s photographs is actually pathos. It’s utterly humanizing. You feel embarrassed for her — and because of that, this is good for her notoriously not-so-great reputation with women. Even though the captions on the photographs detail the various ways in which Munn wants Pine to violate her, her alleged taste for vanilla rough sex seems oddly sweet, and feels kind of cruel to have dug up and put on display now. The captions never say anything like “I love you”; the closest is “I <3 when you kiss me," which comes right after a bunch of other things she "<3"s when he does that are unprintable on Grantland. (<3 u, Mickey!) And yet the overwhelming impression is that she is trying to convey her real affection for "Chris," but expressing it as intense sexual desire. Leaked nudes are more sensual than the bulk of pornographic nudes because they are absurdly intimate. The Munn photos titillate because they were clearly not meant to be seen.

Of course, we have no idea whether there are other, more chaste letters, or what went down in private between two human beings we don’t actually know. Shooting hours are long and people get in relationships and then go away on location. Munn probably took the pictures and added the captions to amuse/turn herself on as much as anything else. The bare sexual desperation of her requests and the silliness of editing your own sexy photos on a computer makes her seem very vulnerable, which unfortunately is often the key to getting women to sympathize with really hot chicks (and rule number one of formulaic rom-commery). It also exposes the dark secret about a lot of sex goddesses: Despite being really hot, she’s probably really insecure. So we will root for Munn to be great on Aaron Sorkin’s upcoming HBO show and accept that there will just eventually be a “nudes” section on Facebook. At least this should put to rest all the criticism that Munn isn’t a real technology geek. She clearly has excellent photo-editing skills.