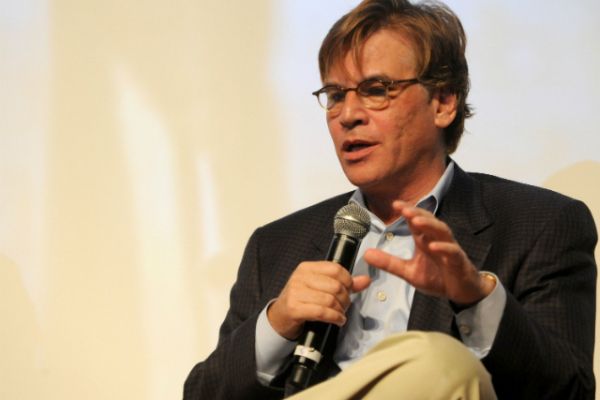 Since Aaron Sorkin signed on to adapt Walter Isaacson’s Steve Jobs biography, he’s spoken a bit in general about the project, explaining his intentions with grand but vague statements like, “Anytime you see the words ‘based on a true story,’ you should think about it as a painting, not a photograph,” and, “You want to write the character like they are making their case to God.” But on Thursday, while at Newsweek and The Daily Beast’s Hero Summit, Sorkin really opened up. During his interview with Tina Brown (video below), our dude let some structure secrets out:

I hope I don’t get killed by the studio for giving too much away, but this entire movie is going to be three scenes, and three scenes only, that all take place in real time … There will be no time cuts. And these three scenes are going to take place backstage before a product launch. The first one being the Mac, and the second one being NeXT, after he had left Apple, and the third one being the iPod. Basically my goal is, I don’t know if you remember the ad campaign he did, it was the Think Differently campaign … “Here’s to the crazy ones,” that’s how it began? If I can end the movie with that text, with that voice-over, if I can earn that ending, then I’ll have written the movie that I want to write.

Bold move, Aaron, spilling the details on your ambitiously stripped down structure. Could this possibly have been a calculated move? Is there any way Sorkin’s already getting push-back from Sony about not doing a traditional biopic, and so is ensuring that his original vision sees the light of day? If the movie ends up a standard biopic and it’s bad, everyone can go “Well, this isn’t the movie Sorkin wanted”; if it ends up a standard biopic and it’s good, everyone can go “Wow, he compromised with the studio and still made a banger.” And meanwhile, Ashton Kutcher’s indie Steve Jobs project is waving its arms and jumping up and down in the corner of the room going “Hey, everyone, you craving a totally normal Steve Jobs movie?! We’re right here!”

Another good thing about this reveal, if it works out how he wants: Usually you have to wait until at least the trailer, and most times the first reviews, to figure out which parts you can space out on. But thanks to Sorkin, we already know exactly when we’re getting up to get that giant popcorn bucket refill.