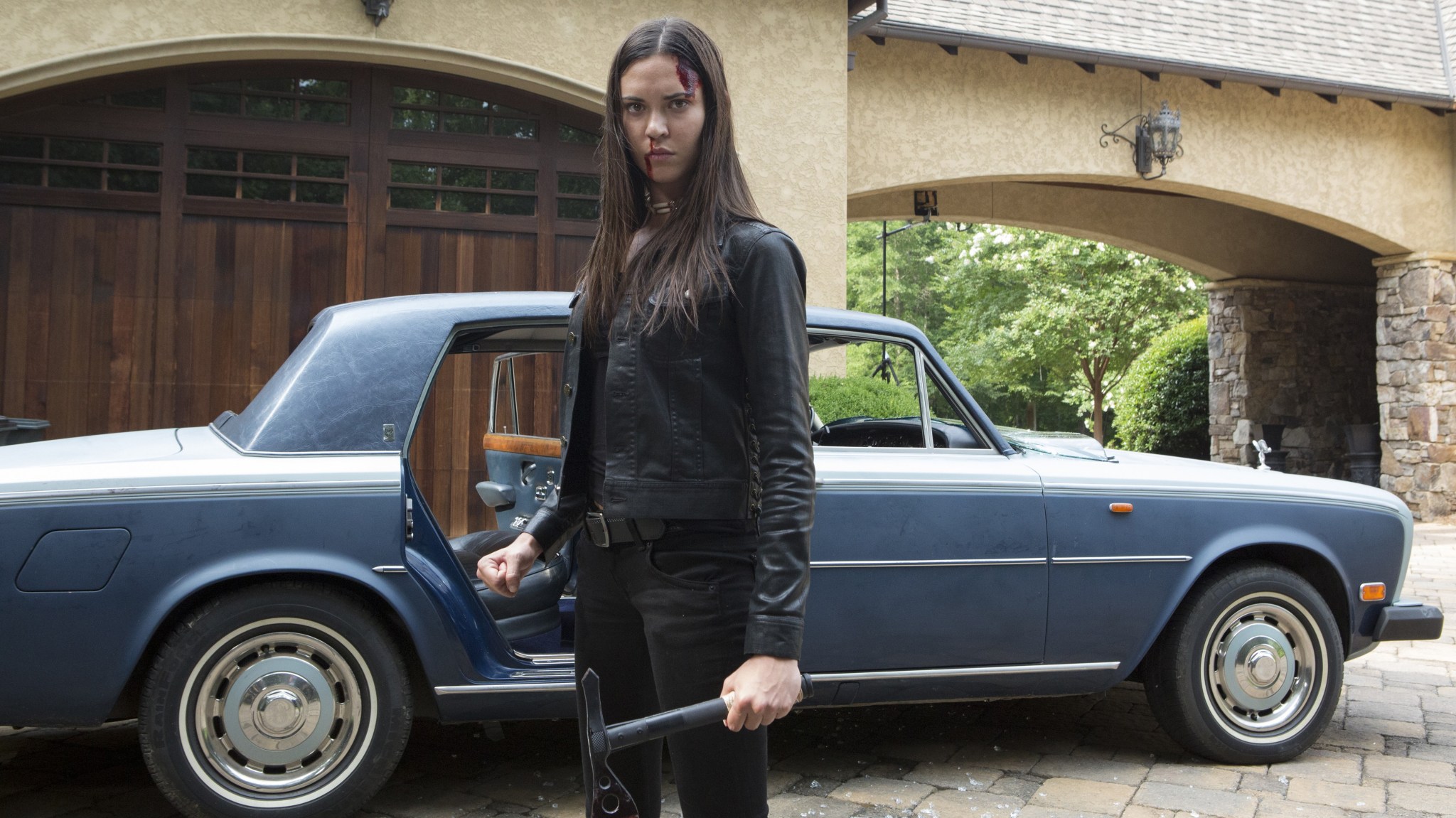 I wasn’t able to write about the third-season premiere of Banshee the other week because I was sick. I almost wasn’t able to write about the third episode of the third season of Banshee because it made me sick. The fight between Burton and Nola Longshadow — dropped in almost casually at the nine-minute mark – was unsettling when it began, nauseating when it crescendoed, and existentially horrific by its last, hemorrhaging seconds. There was a violence here that was literally breathtaking — though now that I know how it is literally possible for one human to reach in and take another’s breath, I’m reconsidering that phrasing. I will never look at hood ornaments the same way. There’s a good chance I will never again look at a neck.

Was it impressive? Of course. The clash was the Swan Lake of savagery, the Nutcracker of cracked bones. But awe wasn’t my first reaction. Or my fifteenth. Needless to say, I am not one of those cavalier humans excited by the intricate choreography of violence. When combat aficionados rush to The Raid, I race in the other direction. Call me squeamish or call me scared: When I see highly trained actors using their bodies as weapons, I can’t help but think how we’re all trapped in the same mushy targets.

So why, then, do I remain in the thrall of Banshee, a Cinemax series that uses physical extremity the way Mad Men uses words, the way American Idol uses glissando, the way CSI: Miami used sunglasses? It was an odd fit in my 2014 Top 10 list, crouched beside the tender-hearted dramedies and British political thrillers that usually float my critical boat. But as “A Fixer of Sorts” gradually revealed, Banshee isn’t just a violent show. It is a show expressly about violence. The punches and tomahawks thrown are an essential part of the show’s brutal vocabulary. Within the (thank god!) fictional confines of Banshee, PA, fighting isn’t as much about defense as it is about expression. Banshee‘s moral universe is based on a morality borrowed in equal parts from the Bible and Die Hard: an eye for an eye and yippie ki-yay. For walking wounded like Hood, Proctor, and Carrie, a simple give-and-take is far more likely to involve concussions than conversation. It’s primal, it’s often disturbing, but it’s plenty consistent.

It’s also a whole hell of a lot of fun. I’ve written before about how Banshee is the proud inheritor of a long and crimson-streaked tradition of pulp fiction. Its central conceit — a con man without a past becomes the sheriff of a town without rules — would fit proudly on the spinner rack with all manner of lurid paperbacks. The craziest thing about “A Fixer of Sorts” wasn’t that Burton-Nola fracas, and it wasn’t even the result. (Yes, Nola was a cool character, but the actress, Odette Annable, had a no-doubt cooler contract with an upcoming ABC show.) It was the fact that it was only the fist-shaped amuse-bouche for what proved to be a groaning smorgasbord of adrenalized insanity. Let’s consider the way Hood’s entire, illegal jig was up before he was able to put on a shirt: An FBI internal affairs guy — played with world-weary vigor by veteran stage actor Denis O’Hare — shows up with cuffs, the truth, and a one-way ride back to pay the piper in NYC. From out of that frying pan, the show base-jumps lustily into the inferno. The idea of Mr. Brantley, an obese, debt-collecting gang lord, traipsing around the country on the back of a flatbed truck is, in itself, phenomenal. To realize that truck as some sort of dimly lit cross between hell’s waiting room and an insurance office in Twin Peaks is its own kind of genius. “You have to ask yourself just how fucked up your universe really is,” O’Hare said to a bleeding Lucas while waiting for their corpulent captor to reemerge. On any other show it’d be an insult. Here it was a celebration. 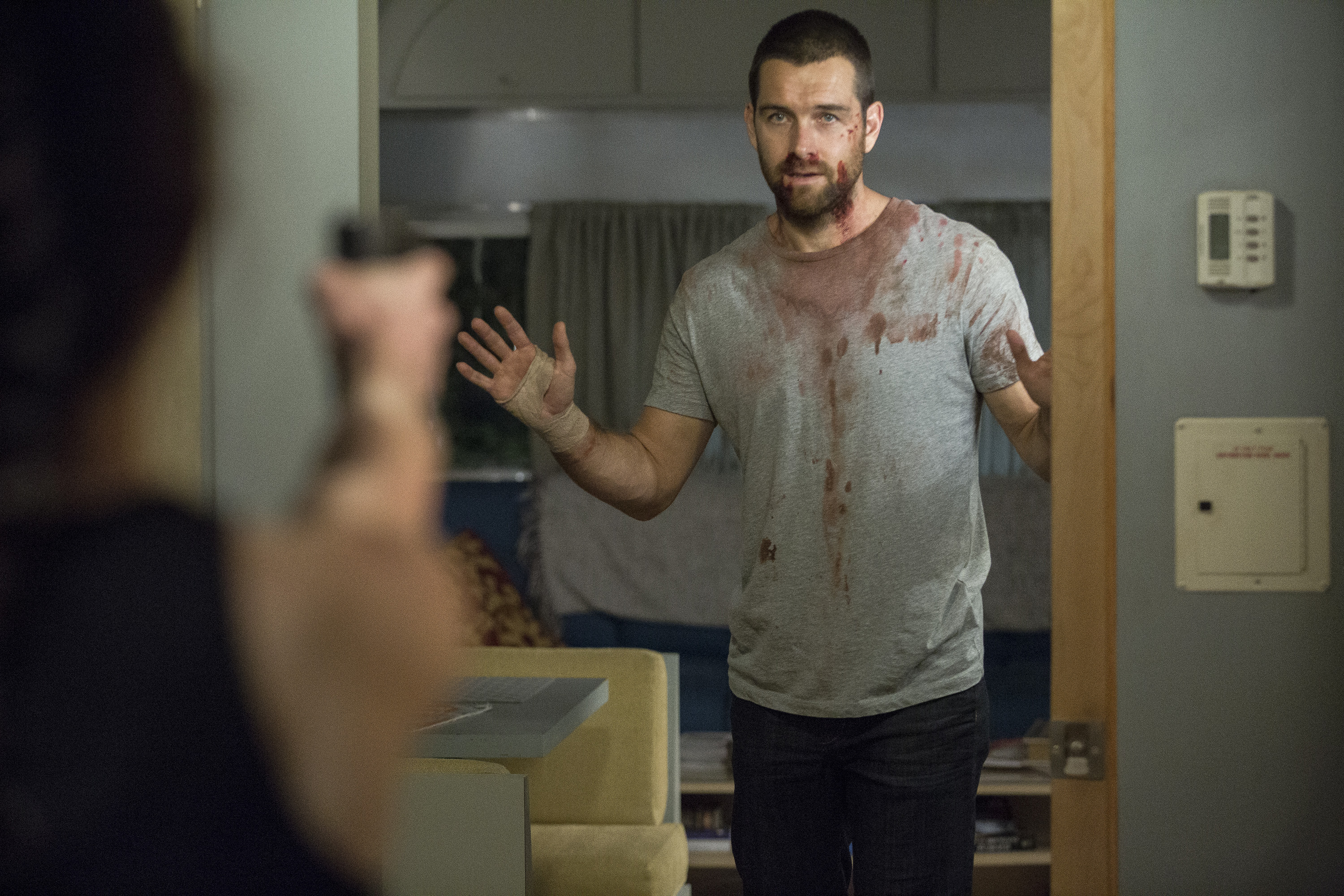 Of course, the genius of Banshee lies in the way co-creator (and now sole showrunner) Jonathan Tropper feasts on outré ideas like Brantley at a buffet table. The series was already plenty busy, with its central tension between Antony Starr’s Hood and Ulrich Thomsen’s sour Proctor. To that, Tropper has ladled on a hornet’s nest of furious skinheads, an ultraviolent gang of trigger-happy Native American separatists (led by this season’s big — make that huge — bad, Chayton Littlestone), and now an army base riddled with purloined millions and sadistic infantrymen. In praising Friday’s episode, I didn’t even mention the zippy Job-Sugar identity-theft operation or the machine-gun battle at the town strip club that made it rain shell casings like so many one-dollar bills. Banshee is a show founded on excess, and it’s excess that allows it to climb to such dizzying heights. It makes other series look not just prudish (what with their lack of exposed trachea) but unflatteringly modest. Why settle for one thing when you can have such a blast doing everything all at once?

Still, it’s impossible to feature this much blood without also possessing an equally outsize heart. And that’s the funny thing about Banshee — it cares just as much as it kills. When I interviewed Tropper on my podcast, he spoke rapturously about his deep love for ’80s action movies and their gonzo disregard for lives and limbs. But Banshee is far more than a throwback pastiche. Watching Brantley’s enormous body transformed into so much highway chum was nuts, but it also felt like a warning, a reminder that we are, all of us, just one trapdoor away from a similar fate — even the hardy superheroes employed by the Banshee PD. As such, I find myself invested in the emotional lives of these characters far more than I am in people less prone to hyperviolence. They feel more alive because it’s anything but a given that they’ll remain that way.

“Who the hell are you?” Siobhan asked a suddenly exposed Lucas at episode’s end, and it hit harder than a bullet. Tropper, who spends his down time engaged in considerably less ferocious pursuits, knows that the worst thing you can do to a fighter is to drop your gloves. On Banshee, as in life, we are what we do. And what they do on Banshee is many things — glorious, hideous, goofy, and barbaric — but never pretty. Watching it always leaves a bruise.